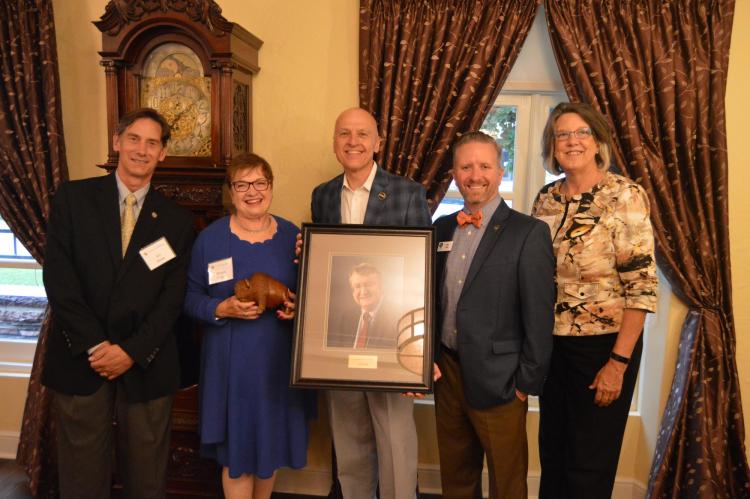 The Philosophy Department is extremely grateful to Mrs. Margot Crowe for a generous legacy gift she made this year in the name of her late husband, Prof. Charles Lawson Crowe (1928-2013), who was a professor in the Philosophy Department from 1967-1993. He received a BA from Duke University (Trinity College) in 1950, and served with the United States Army in Germany from 1951-1953. Upon his return, he was accepted for a combined degree from Union Seminary and Columbia University where he received his PhD in Philosophy of Religion. From 1955-56, he was Assistant Director of Graduate Admissions at Columbia University, and later taught philosophy and ethics at Sweet Briar College from 1956 -1964. While at Sweet Briar, he initiated the integration of Sweet Briar College. Civil Rights, ethics and values became a central part of his professional life. He finished his Ph.D. in 1961. From 1964-1967, he became National Representative and Director, Dissertation Fellowship Program, Woodrow Wilson Foundation, Princeton, NJ. While speaking at a Graduate Dean's conference in 1967, he was invited to come to the University of Colorado, Boulder as Associate Dean of the Graduate School. From there he became Dean of the Graduate School, the first to hold the position of Provost, Vice President for Research. In 1974 he was appointed the first Chancellor of the Boulder Campus, University of Colorado from 1974 - 1976. During those years, Dr. Crowe had an appointment in the Philosophy Department as Associate Professor 1967-1971 and Professor of Philosophy 1971-1993. He was survived by his two sons from his first marriage, Thad and Glenn, as well as his wife Mrs. Margot Crowe.

Mrs. Crowe is herself an alumna of CU Boulder (1963-1967), and has given years of service to the University through an extensive list of volunteer roles. Notable among these is her service as President of the CU Retired Faculty and Staff Association; her membership on the Colorado Shakespeare Festival Advisory Board and on the College of Music Adopt-A-Student Committee; and her service to the Colorado Shakespeare Festival Gardens.

Dr. Lawson Crowe dedicated many years of his life and service to the Philosophy Department and to the University of Colorado, and it was in acknowledgement of his commitment to philosophy and to the welfare of philosophy graduate students that Mrs. Crowe made this gift to us. Mrs. Crowe is a strong and passionate supporter not only of philosophy, but also classics, music, and the performing arts on campus, and we are enormously grateful to her for her gift and for her continuing support of the arts, humanities, and higher education. Her gift will be used to support Philosophy graduate student education and research, by supporting a host of crucial graduate student professional development activities, including dissertation writing, research support, and travel to conferences.