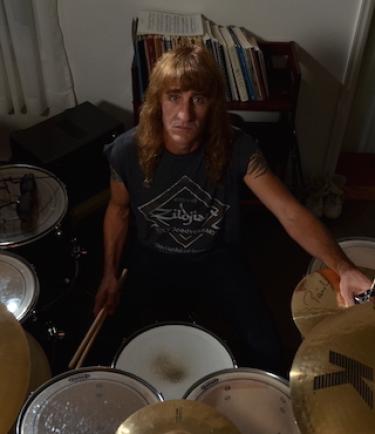 Mike Barnett balances an active career as a composer, drummer, recording artist, record producer, author and educator. He currently teaches songwriting and in instrumentation at the College of Music, as well as various courses in rock and American popular music. His eclectic creative output and non-traditional background distinguish him among his peers.

A passion for rock music led Barnett to discover his penchant for the drums. He began self-instruction at an early age and was well established in the world of heavy metal and art rock while still in his teens. He has worked as a songwriter and drummer in several bands over the past three decades, including Phantom Crew, Dofka, Tainted Saint and Throttle, and has performed on many studio recordings as a “hired gun.” He has also produced records for various rock and pop artists. His most recent creative work in the recording arts is an instrumental heavy metal/classical fusion project called Terminal Degree, which brings together electric violins and electric celli with conventional electric bass guitar and drum set. The first Terminal Degree recording, “The Middle of Nowhen,” met with high critical acclaim and commercial success. The second studio effort, “Breed,” which features Barnett's CU Boulder colleague Chas Wetherbee on electric violin, was released in the Spring 2016 on vinyl and compact disc.

Barnett’s output as a composer includes orchestral works, violin and piano concerti, wind ensembles, a chamber opera and many chamber works, solo works and songs. In addition to his recent work with Chas Wetherbee, Barnett has enjoyed collaborations with CU Boulder colleagues Erika Eckert, David Korevaar, David Requiro and Michael Thornton. Videos of live performances of some of Barnett’s music, recorded from the college’s Faculty Tuesdays recital series, are linked below.