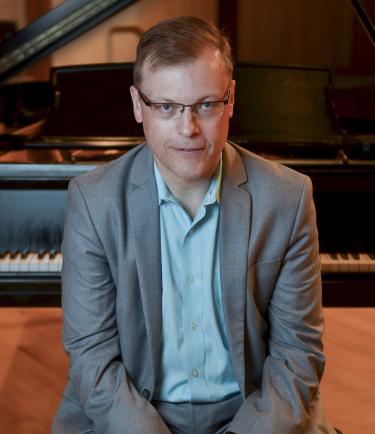 Jeffrey Nytch has built a diverse career as a composer, teacher, performer, arts administrator, and consultant. In addition to 25+ years as a professional musician, he has also run a small business, co-founded a non-profit service organization in Houston, performed a wide range of repertoire as a vocalist, and served six seasons as Managing Director of The Pittsburgh New Music Ensemble (“PNME”), one of the nation’s premiere new music ensembles. In 2009 he joined the faculty of The University of Colorado-Boulder, where he is an Associate Professor andserves as Director of The Entrepreneurship Center for Music. His philosophy of teaching entrepreneurship hinges on the idea that entrepreneurial thinking is a creative process that can be applied in any number of directions, and that students with entrepreneurial skills are better equipped to thrive in the ever-changing dynamics of the 21st-century arts marketplace.

A native of Vestal, New York, Nytch completed a Bachelors degree at Franklin andMarshall College (double-majoring in music and geology), and earned Masters and Doctoral degrees in composition from the Shepherd School of Music, RiceUniversity. As a composer he has received numerous grants, awards and commissions, and his music has been performed throughout the U.S. and abroad by many major ensembles and artists. Recordings include releases on the MMC, New Dynamics Records, and Koch International Classics labels. He as also held teaching posts at Carnegie Mellon University, the American Festival for the Arts, and Franklin & Marshall College.

Since arriving at the University of Colorado-Boulder in 2009, Nytch has rebuilt the Entrepreneurship Center for Music to include an expanded and enhanced curriculum in music careers, entrepreneurship, arts management and community engagement; a weekly professional development series (the “Career Launchpad”);regular guests (“The Entrepreneur’s Roundtable”); and has partnered with the Leeds School of Business to create an 18-credit Certificate in Music Entrepreneurship. Music students at CU also participate in the New Venture Challenge, the cross-campus entrepreneurship competition, and work in internships spanning a wide range of commercial and non-profit arts ventures.

Nytch is in wide demand as a speaker, workshop facilitator, and scholar, having delivered papers at numerous national venues including the United States Association of Small Business & Entrepreneurship, the College Music Society, the National Association of Schools of Music, the Marketing Management Association, and the Society of Arts Entrepreneurship Education. He has been in residence at the Jacobs School of Music at Indiana University, University of Michigan, Northwestern, Michigan State, the Manhattan School of Music, Baylor University, The University of Minnesota, Western Michigan University, and many others.  His publications on arts entrepreneurship have appeared in Artivate: The Journal of Arts Entrepreneurship, The Journal of Arts Management, Law, and Society, and theJournal of Management Policy & Practice. His first book, The Entrepreneurial Muse: Inspiring Your Career in Classical Music (Oxford University Press), was released 2018.