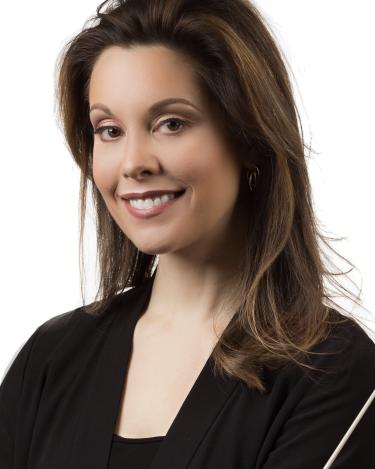 Elizabeth Swanson is the Associate Director of Choral Studies at the University of Colorado Boulder. She is honored to serve as conductor of the CU Treble Chorus (formerly the Women's Chorus) and the University Choir, which was founded in 1938 by Warner Imig. A passionate educator, Swanson also teaches courses in conducting at the undergraduate level, applied lessons in conducting at the graduate level, and serves on master’s and doctoral committees. Her conducting students have reached the final round in ACDA student conducting competitions and have been hired at leading universities upon graduation.

Swanson maintains an active schedule as conductor, clinician and adjudicator throughout the United States with recent guest conducting appearances at Carnegie Hall (New York City) and at the University of Hawai’i–Mānoa (Honolulu). Closer to home, she serves as the Associate Conductor of the Boulder-based professional choir Ars Nova Singers alongside conductor, Tom Morgan (founding artistic director).

Nationally, Swanson is vice president of the Executive Board of the National Collegiate Choral Organization (NCCO). She oversees the organization's National Board and was the inaugural chair of the organization’s first-ever Mission and Vision in Governance Committee, whose primary purpose is to uphold principles of equity, diversity and inclusion within the NCCO. Swanson previously served on NCCO’s Executive Board as the Acting Chief Editor of Publications and Secretary and has served as an associate editor of The Choral Scholar. Swanson also serves as the Collegiate and University R&R Chair for Southwestern ACDA (SWACDA).

Prior to her appointment at CU Boulder, Swanson lived in New York City and was Director of Choirs at Nyack College School of Music in lower Manhattan. Under her direction, the Nyack College Chorale performed in world renowned venues such as David Geffen Hall at Lincoln Center, the Cathedral of St. John the Divine, St. Paul’s Chapel at Trinity Church Wall Street, and toured domestically.

A noted mezzo-soprano, Swanson sings professionally with the Ars Nova Singers and was previously a member of the New York City-based professional choir, Manhattan Chorale, an ensemble for which she was also the manager for three seasons. As a member of Chorale Le Chateau, Swanson took part in collaborations with Wynton Marsalis and the Jazz at Lincoln Center Orchestra in performances of Marsalis’s "Abyssinian Mass," conducted by Damien Sneed. Swanson has also been a member of the Chicago Symphony Chorus and Grant Park Chorus.

Swanson has also been a member of the conducting faculty at the University of Chicago, North Park University, and Ithaca College and has served as a conductor of choral ensembles at Northwestern University and Roosevelt University (Chicago College of Performing Arts). Swanson has been published in the Choral Journal. Her dissertation was a qualitative analysis of "August 4, 1964," an oratorio by the Pulitzer Prize-winning composer Steven Stucky with libretto by Gene Scheer.