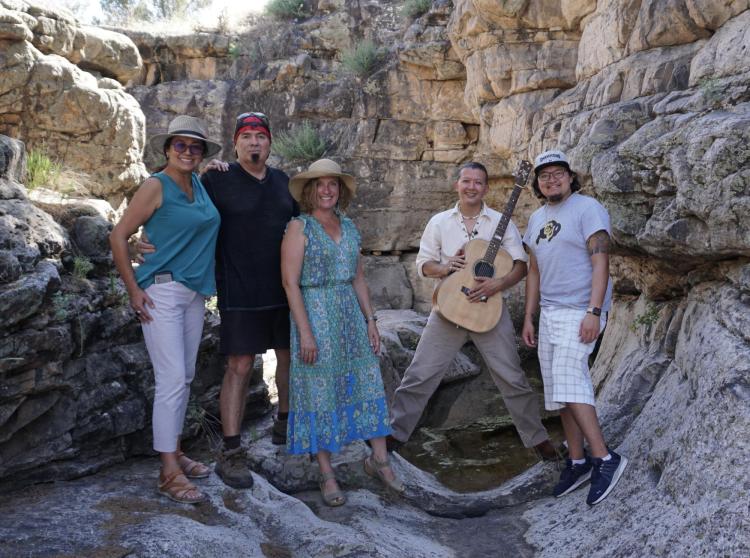 Photo: Soundscapes of the People, a collaboration between the University of Colorado Boulder and Colorado State University Pueblo, has collected 27 oral histories in the past year exploring Pueblo’s cultural music history. AMRC Director and Professor of Musicology Susan Thomas (middle)—who also serves as the College of Music’s Associate Dean for Diversity, Equity + Inclusion—and CU Boulder alumna Xóchitl Chávez (left)—who now teaches at the University of California, Riverside—visited Pueblo last month. Also pictured are musician Joe Bobian (second from left), musician Jason Wilson (middle) and CU Boulder Multimedia News Specialist Nicholas Goda (right). Thomas, Chávez and College of Music Associate Professor of Ethnomusicology Austin Okigbo, along with their team, seek to have the histories digitally accessible to members of the public through CU and CSU Pueblo libraries by the end of the year. Photo credit: Xóchitl Chávez.

The College of Music’s American Music Research Center (AMRC) is bustling with activity as the school year begins. AMRC Director Susan Thomas—who also holds the positions of Professor of Musicology and Associate Dean for Diversity, Equity + Inclusion at our College of Music—is spearheading various exciting projects, events and advancements at the center.

The AMRC was recently awarded multiple grants to fund its research, including from the National Historical Publications and Records Commission. Specifically, this grant is funding the digitization of the Grauman’s Theatres Silent Film Scores Collection, donated to the AMRC by Rodney Sauer, a musician himself.

Additionally, in 2023, Thomas will teach a DMA seminar with Sauer on silent film scoring. Students will work with the digitized collection, learn about the history of silent film scoring and learn how to use those materials to make scores.

Another inspiring project—Soundscapes of the People: A Musical Ethnography of Pueblo, Colorado—received funding from a National Endowment for the Humanities Archaeological and Ethnographic Field Research Grant. The team involved has already collected more than two dozen oral histories of Pueblo’s diverse musical traditions from musicians there.

“It’s really exciting to be able to build on the support we’ve received from CU Boulder’s Office of Research and Innovation and the Office of Outreach and Community Engagement who funded the first two years of this project,” Thomas says. “[The NEH grant] allows us to be involved with this community and do this really important music research through the beginning of 2025.”

College of Music graduate students are often involved in the AMRC, working on both the Soundscapes and Grauman’s Theatres projects. Conducting graduate student Kedrick Armstrong, for example, was awarded the Susan L. Porter Fellowship to fund his research focused on Black female composers.

“In the AMRC collections, the Helen Walker-Hill collection comprises music by Black women composers. One of the reasons Kedrick came to CU Boulder was because that collection was here. He was particularly interested in a composer by the name of Irene Britton-Smith,” explains Thomas.

Armstrong created a working score for the orchestra by using a manuscript in the AMRC collection, as well as a few parts housed in the Center for Black Music Research in Chicago. On Nov. 16, Armstrong will conduct the CU Symphony Orchestra in the world premiere of Irene Britton-Smith’s Sinfonietta.

Thomas herself was recently awarded The Joseph Negler Endowed Chair in Music, which was established in 2000.

“That gift is an indispensable part of why the center is able to do what we do,” says Thomas. “Obviously, it’s a tremendous honor and an important reminder about how we can leave a legacy in our work. What we do doesn’t have to be ephemeral—we can make a lasting impact.”

Negler passed away on June 4, 2022. The College of Music community is deeply saddened by his passing and is grateful for his enduring support.

Assistant Professor of Composition Annika Socolofsky blends the realms of art and science through the Instrument Design Lab (IDL). The course offers a science-based context to instrumentation, sound and musical creation, giving College of Music students a foundation in the science of music. END_OF_DOCUMENT_TOKEN_TO_BE_REPLACED

It was a busy fall for the American Music Research Center (AMRC)! One of the... END_OF_DOCUMENT_TOKEN_TO_BE_REPLACED

Friends, My heart is heavy. Associate Professor of Violin Charles (Chas) Wetherbee passed away on... END_OF_DOCUMENT_TOKEN_TO_BE_REPLACED
Return to the top of the page