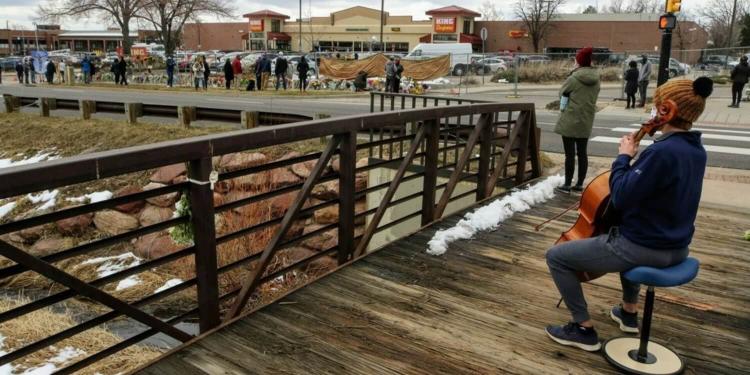 Less than one week after the series of shootings in metro Atlanta, we experienced a mass shooting right here at home. Just as we stand together with our Asian, Asian American and Pacific Islander students, faculty and staff, we stand together in our shared grief over 10 lives lost at a local King Soopers on March 22.

One of our own—18-year-old freshman Louis Saxton, who's studying cello with Assistant Professor of Cello David Requiro—proved yet again the healing power of music: after fleeing for his life as the first shots were fired in Monday's horrific event, Saxton returned to the scene with his cello the next day. "[Music] is a way for everybody to connect and to feel together because this isn't the sort of event that you're able to just brush off," said Saxton, a native of Bemidji, Minnesota. "I needed to comfort those who had lost a lot more than I had." Hear Saxton share his first-hand experience and listen to a few passages of his moving performance of Bach's Cello Suite 1 in G Major.

Also in the news: CU student, shooting survivor returns to memorial each day to play cello

Remembering "a personal cheerleader for the band"

Among the victims of Monday's shooting incident was Teri Leiker, 51, a longtime King Soopers employee and a loyal CU Buffs supporter.

As reported in The Denver Post, "The University of Colorado’s Golden Buffalo Marching Band gathers every Friday night before home football games to rally fan support in the heart of Boulder. Nobody loved the Pearl Street Stampede quite so much as Teri Leiker. 'She was there even before we started gathering, which is half-an-hour before the stampede started,' said CU Marching Band Director Matt Dockendorf. 'She was kind of a personal cheerleader for the band.'"

Our hearts are with the families and friends of all the victims.

It was a busy fall for the American Music Research Center (AMRC)! One of the... END_OF_DOCUMENT_TOKEN_TO_BE_REPLACED

Friends, My heart is heavy. Associate Professor of Violin Charles (Chas) Wetherbee passed away on... END_OF_DOCUMENT_TOKEN_TO_BE_REPLACED

Longtime Associate Professor of Saxophone Tom Myer retired in May. As the year draws to a close, enjoy his insightful career reflections and advice … and discover what he’s up to now! END_OF_DOCUMENT_TOKEN_TO_BE_REPLACED
Return to the top of the page