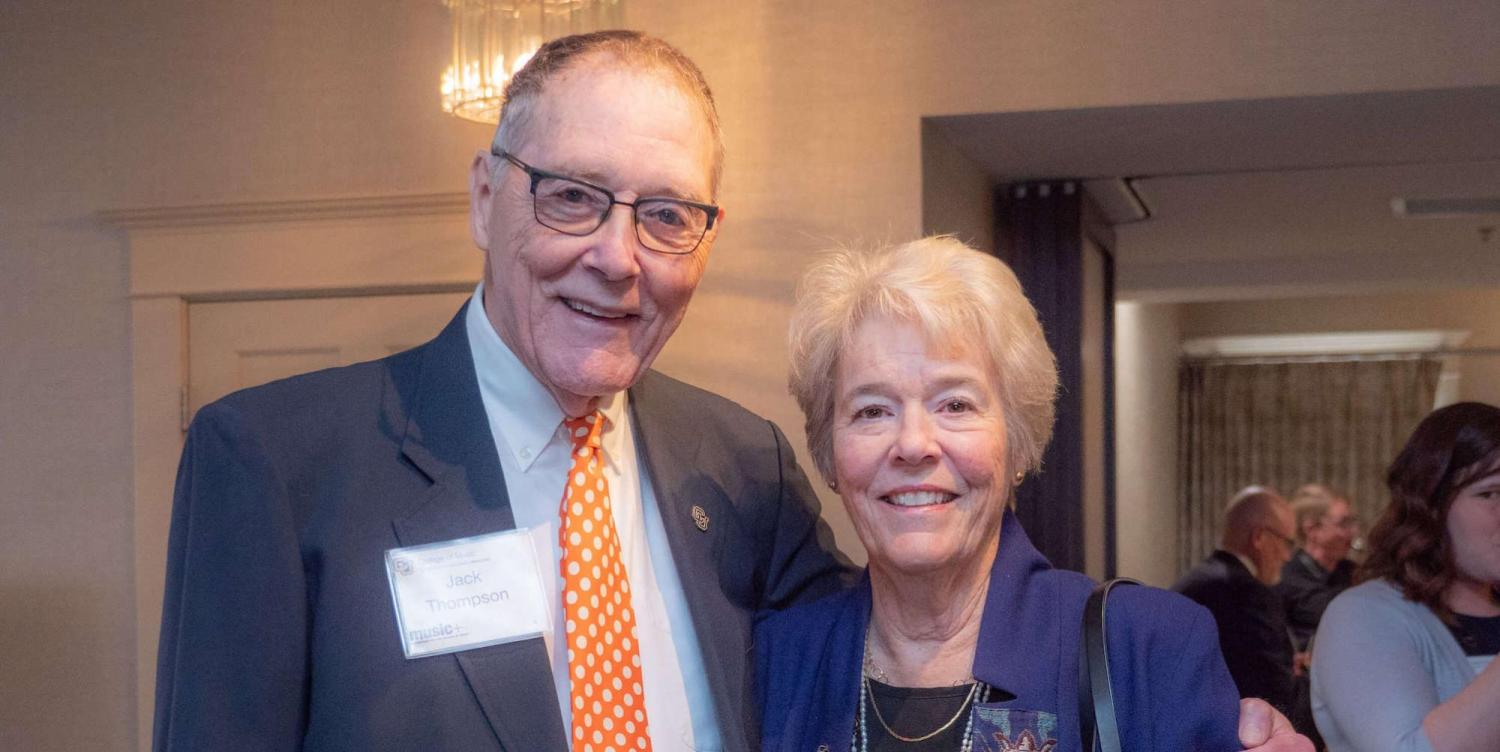 If you’ve been around the College of Music—or the west hallway on the first floor of Macky Auditorium—you probably know the name Thompson well. But did you also know that the CU Boulder couple Jack and Jeannie Thompson met in the same place that many current students are still meeting today?

“We actually met at the Sink,” Jeannie recalls. “But we didn’t start dating until senior year.”

That was 1964. Jeannie was a zoology major, and Jack was a history major. Fast forward to today, and their names are synonymous with generosity and excellence not only at the College of Music but across the CU Boulder campus as well. The Vaccine Development Neighborhood at the Caruthers biotechnology building, the Interdisciplinary Quantitative Biology program, the writing awards at the Center of the American West and an American History fellowship in the history department. All exist, at least in part, because of the support of the Thompsons.

But here at the College of Music, it was the couple’s love of music that led to the first named program in college—and campus—history back in 2013: The Thompson Jazz Studies Program. 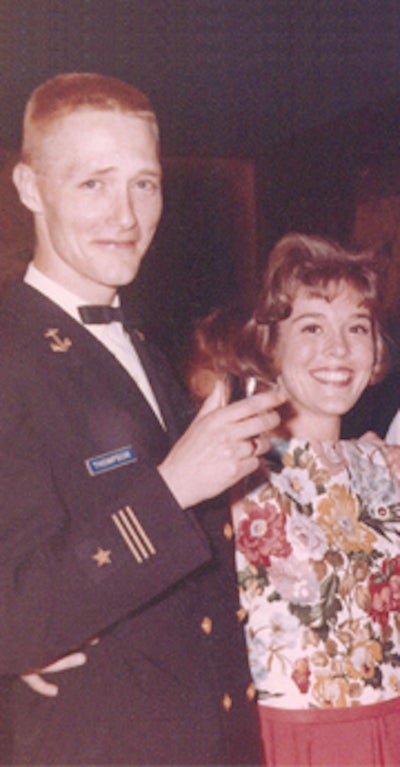 Originally from Ohio, Jeannie Thompson played piano as a child and through high school before heading west to Boulder for undergraduate studies. She spent two summers at Interlochen Center for the Arts in Michigan and sang in the University Choir while she was a student at CU. While she majored in zoology and became a scientist, later earning an MA in counseling psychology and an MBA at Northwestern University, she has fond memories of making music at the College of Music.

“It was great fun. When I was in undergrad that was the only musical thing I did,” Jeannie says. “The warmth I felt going into the Imig building then is a fond memory.”

Jack Thompson, on the other hand, has never been a musician. But he’s always been fond of and understood all sorts of music—from classical to jazz.

“Jack was in ROTC after being enlisted in the Marines. He understands jazz better than I do. I sat in on the history of jazz class to get up to speed,” Jeannie says.

A Colorado native, Jack graduated in 1964 and later returned to Boulder, after a tour in Vietnam with the Marine Corps, to earn an MA in American history. He went on to get a PhD in that discipline from the University of Michigan and subsequently became a professor, and later a dean, at Northwestern.

When the couple retired to Boulder in 2002, they set their sights on helping programs across their many disciplines and interests that continue to inspire them at their alma mater. In addition to the gifts listed above, they gave a major gift to name the Thompson Jazz Studies Program.

“The jazz program at CU Boulder was highly ranked, Chancellor Phil DiStefano had declared it one of the centers of excellence at the university, it had won DownBeat awards, we liked the faculty and we liked the students” Jeannie explains.

"Dean Daniel Sher was helpful in our making our decision as to where we could be most beneficial in building and helping a program at the college."

Jeannie, who currently serves on the College of Music Advisory Board, is also former chair of the board of the University of Colorado Foundation. She says there’s something special about the community that supports music at CU.

"When we got further involved, there was strength with Dan Sher as dean and Becky Roser as chair of the board. And now there's equal ability with Mikhy Ritter and Laurie Hathorn. These three women have been so devoted to the place, spreading goodwill. It's a unique combination of energy and enthusiasm."

As part of the 2018 capital campaign at the college, the Thompsons made their most recent gift to name the dean’s office in the expanded Imig Music Building, the Benson Office of the Dean, named for former University of Colorado President Bruce Benson and his wife Marcy. Jeannie says she and Jack saw it as another opportunity to acknowledge quality.

“It had less to do with music and more to do with leadership and recognizing the strong leadership of the university system provided by the Bensons.”

She says as the college’s programs and reputation grow in the music education world, a breathtaking new home in the shadow of the Flatirons is a much-needed “feather in the cap.”

“When I think back to when we first got involved, the reputation of programs, the strength of the faculty, the talent of the students coming in—I’m not sure I can do a comparison. The programs just keep getting better and better.

“What this new building does is show that there is support at the campus level for this college, and that means all the world to people who are thinking of making contributions to its future.”

Olivia Huizar Conner shares how her background inspires her to promote Diversity, Equity and Inclusion (DEI) in music. END_OF_DOCUMENT_TOKEN_TO_BE_REPLACED

Alumna Annie Booth shares how the College of Music continues to impact her career as an award-winning jazz pianist, band leader, composer/arranger and educator—and offers valuable career advice. END_OF_DOCUMENT_TOKEN_TO_BE_REPLACED
Return to the top of the page