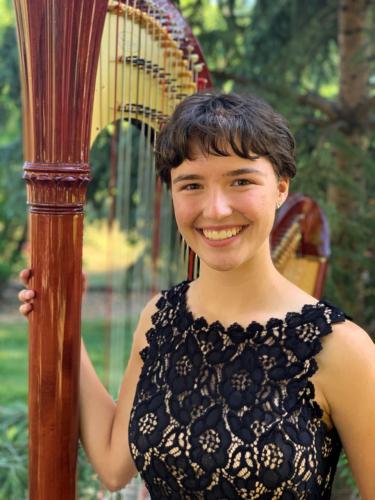 This fall, freshman Shelby Roberts joined the ranks of the talented musicians studying at the College of Music. With the help of the prestigious Sher Distinguished Musician Scholarship, Roberts is excited to pursue her Bachelor of Music in harp performance.

When Anna and John J. Sie committed $2 million to establish the Daniel and Boyce Sher Distinguished Musicians Endowment in 2014, they sought to provide excelling students like Roberts with a full-ride scholarship.

After graduating from Skyline High School in Longmont, Roberts spent her summer break with her two favorite hobbies: music and tennis. Finishing her senior year by placing third at her regional tennis tournament inspired her to keep playing through summer and help coach a youth tennis team in Fort Collins. Roberts also attended several music festivals this summer: Bravo! In Vail, the NY Philharmonic, Hilary Hahn with the Philadelphia Orchestra and many more.  As this year’s Sher Scholar, she says she’s thrilled to be studying in Boulder.

A skilled harpist, Roberts has been playing the beautiful instrument for over 13 years now. “My mother took me to a play, and Cinderella was playing the harp. I pointed to it and said, ‘That’s the one,’” she explains. That Christmas, before Roberts was even 5 years old, she was given a Wee Bonnie harp with just 17 strings.

Seventeen strings soon became 26, 37 and finally the concert grand harp, which she has been playing for two years now.

Roberts especially appreciates the versatility of the instrument. “One of my favorite things to do is explain it to people. I like that almost as much as performing it. It’s not just a string instrument,” she says. “It can be percussion, and you can play around with it especially as it’s becoming more present in contemporary music.” 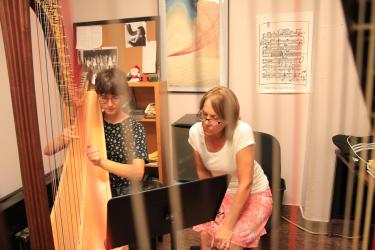 As Roberts muses on what she ultimately wants to do, she notes that her dream career is constantly shifting. “I’d like to be in a harp quartet. I saw the Dallas Harp Quartet play, and it was incredible. I performed with Janet Harriman in her Faculty Tuesdays concert.” Harriman, now Roberts’ studio professor at the College of Music, has become a beloved mentor for Roberts.

The decision to come to the University of Colorado Boulder was not an easy one for Roberts, as she weighed her options between a variety of different schools and programs. “Knowing that what I can do on the harp would be acknowledged with this scholarship made me want to be a part of CU. I love Janet [pictured at left] so much. She’s an amazing influence in my life, as I’ve known her for three years,” she said.

Harriman’s influence has further inspired Roberts’ own interest in teaching. “Her personality and how she approaches learning the music isn’t extremely rigid. I feel like I’m participating in how I play and how I grow. I like her constructive feedback, and I want to be like that.”

Indeed, Roberts is already teaching herself: Her first student is her 7-year-old brother, who is learning to play on one of her old harps. He has just mastered “Twinkle Twinkle Little Star” under her guidance.

“I think teaching is inevitable, and it’s important to pass on that skill and information. My favorite part is being a student, and I want to do that for other people too.”

Curiosity drives Lydia Wagenknecht, a PhD candidate in ethnomusicology and recent recipient of a Fulbright Research Award. “I care that my research will help us understand something in a more broad-based way that we didn’t understand before,” she says. END_OF_DOCUMENT_TOKEN_TO_BE_REPLACED

We’re so excited to welcome alumnus Damani Phillips back to campus this week and to present him the College of Music’s 2022 Distinguished Alumnus Award at our commencement ceremony on May 5! “The versatile training provided by CU has been the cornerstone of my success to date, and has enabled me to do and be many things well beyond typical expectations,” he says. Meet Phillips and discover his powerful advice to graduating Music Buffs. END_OF_DOCUMENT_TOKEN_TO_BE_REPLACED

On May 5, we look forward to welcoming back Judith Glyde, formerly professor of cello and chamber music at the College of Music and chair of our string faculty. Since retiring in 2014 to live in New York City, the professor emerita she has been active with the college’s alumni community there, offering tremendous support to Forever Buffs who are now living and working in the city. END_OF_DOCUMENT_TOKEN_TO_BE_REPLACED
Return to the top of the page