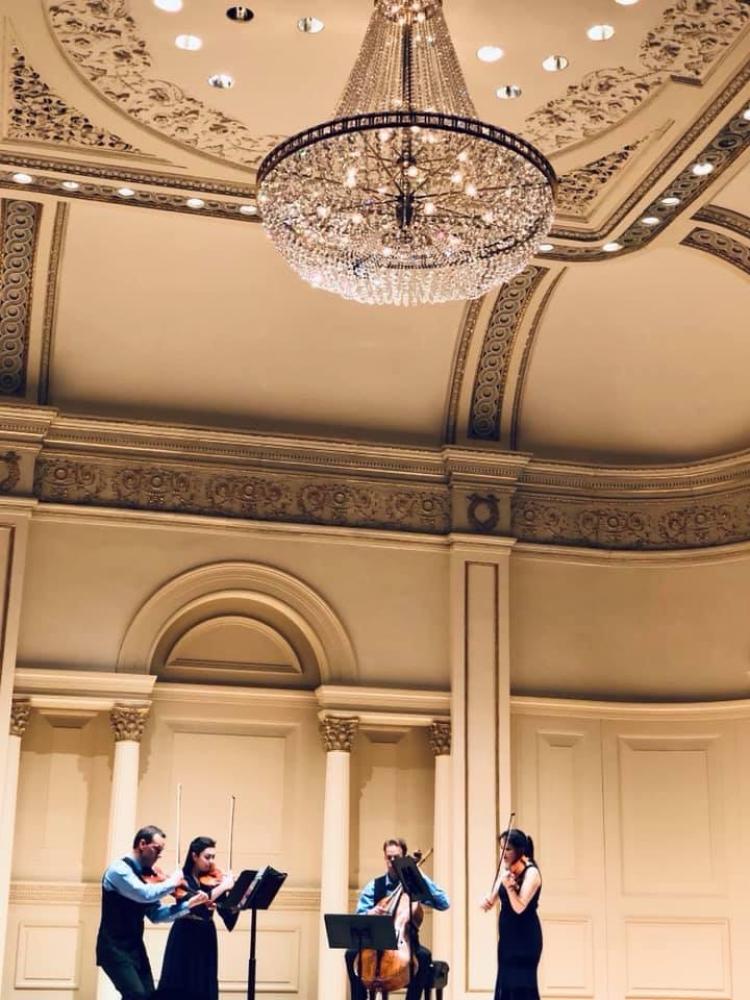 It’s not every day you get invited by your professor to join his professional string quartet.

“I was shocked when he asked me to audition. All I could think was, ‘Are you sure?’”

Second-year violin doctoral student Marisa Ishikawa knew she was on trial as she traveled with Assistant Professor of Violin Charles Wetherbee to the East Coast early this year, filling in as second violin in his Carpe Diem string quartet. You may have even been following along on Instagram, as Ishikawa shared a backstage look at her trip on @cubouldermusic.

What she didn’t know was how well she would fit into the group.

“I had heard them play at CU last fall, and I was struck by their musicianship and collaborative energy. I was intimidated by the prospect of stepping into such a tight-knit group, but more excited by the challenge.”

Ishikawa, who grew up in Boulder, may have a familiar name to the College of Music family: Her dad is Yoshi Ishikawa, the college’s long-time bassoon professor, and her mom is Brenda Ishikawa, who often plays piano on the Faculty Tuesdays series. But she says despite the fact that music is in her blood, she never felt pressured to join the family business.

“I started playing violin when I was 3. My parents were very influential, but more than anything they instilled in me a love of music. They never pushed me to be a musician—they let me come to that decision on my own.”

Ishikawa was first a College of Music student as an undergrad, double majoring in violin performance and accounting. “Again, my parents were very supportive of me being a well-rounded person and making sure I had other experiences outside of the practice room.” She says though she is proud to have earned a degree from the Leeds School of Business, it was the lessons she learned at the College of Music with her violin teachers—first Margaret Soper Gutierrez then Charles Wetherbee—that helped shape her path forward.

“Chas and Margaret had such a wonderful way of teaching and challenging me that I realized, with the right kind of work, I could be successful as a musician.”

And in case you’re wondering how one completes a performance degree and an accounting degree in four years, Ishikawa says she has one person to thank for that.

“I did both degrees in four years because of [Undergraduate Staff Advisor] Victoria Ibarra. She was an angel. She planned out my entire four years, including summer school. I couldn’t have done it without her.”

After graduating in 2015, Ishikawa went to Austin, Texas, to study with Brian Lewis at Butler School at the University of Texas at Austin. While earning her master’s, she nurtured a love of chamber music with two classmates.

“I really fell in love with chamber music in Austin,” Ishikawa explains. “With my friends, Daniel Kopp and Sophie Verhaeghe, I started a classical chamber music festival called Austin Camerata, and I’ve learned so much from that process.”

Ishikawa is still involved in the festival, helping plan for this May’s event from afar. Despite the connections she made in Austin, when it came time to pursue her doctorate, Ishikawa returned to the place where she knew she could continue to pursue both performance and teaching.

“I knew that I wanted to study with Chas, and at CU I had the opportunity to be a TA and teach. Not very many DMA programs have that option right now.

“But really, Chas made me want to come back here.” 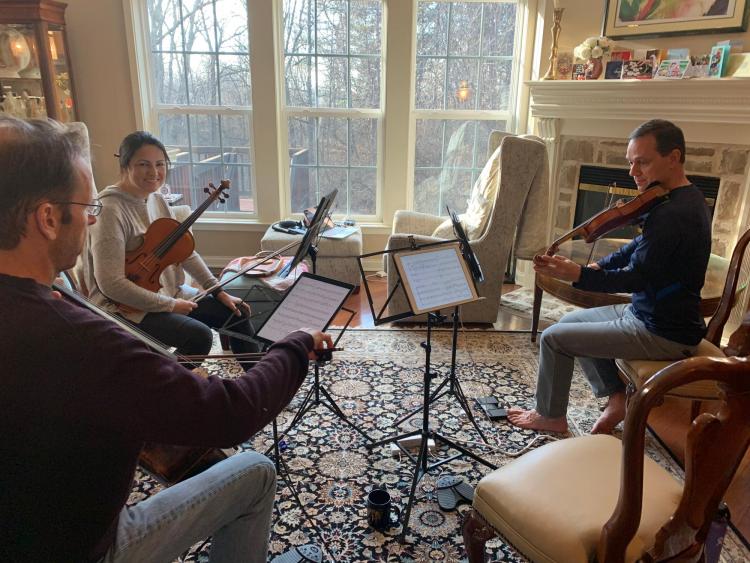 The admiration and respect between student and teacher were mutual, which led Wetherbee to invite Ishikawa to join his quartet as a fill-in on a series of performances early in January—including one at Carnegie Hall’s Weill Hall.

“Marisa is a perfect example of the ‘new generation’ of musician that we are trying to help train and prepare as teachers,” Wetherbee says. “Having her join the quartet should serve as an example to her graduate peers both here at CU and elsewhere.”

After the dust had settled over the course of those few whirlwind days, Carpe Diem had a new second violinist.

“Marisa’s playing speaks for itself and fits our style,” Wetherbee continues. “We also required a member with business savvy, someone who has experience with things like web design, fundraising, artistic planning, grant writing, PR, marketing and social media. Those are a lot of hats to wear, and very, very few players of the caliber we were seeking can comfortably handle them. Marisa is outstanding in that regard.”

Ishikawa says she’s excited for the opportunity to dive into Carpe Diem’s unique repertoire. “I had a misconception about contemporary music as being less accessible, and they’ve proven that to be not true. They’re not afraid to try anything.”

Curiosity drives Lydia Wagenknecht, a PhD candidate in ethnomusicology and recent recipient of a Fulbright Research Award. “I care that my research will help us understand something in a more broad-based way that we didn’t understand before,” she says. END_OF_DOCUMENT_TOKEN_TO_BE_REPLACED

We’re so excited to welcome alumnus Damani Phillips back to campus this week and to present him the College of Music’s 2022 Distinguished Alumnus Award at our commencement ceremony on May 5! “The versatile training provided by CU has been the cornerstone of my success to date, and has enabled me to do and be many things well beyond typical expectations,” he says. Meet Phillips and discover his powerful advice to graduating Music Buffs. END_OF_DOCUMENT_TOKEN_TO_BE_REPLACED

On May 5, we look forward to welcoming back Judith Glyde, formerly professor of cello and chamber music at the College of Music and chair of our string faculty. Since retiring in 2014 to live in New York City, the professor emerita she has been active with the college’s alumni community there, offering tremendous support to Forever Buffs who are now living and working in the city. END_OF_DOCUMENT_TOKEN_TO_BE_REPLACED
Return to the top of the page