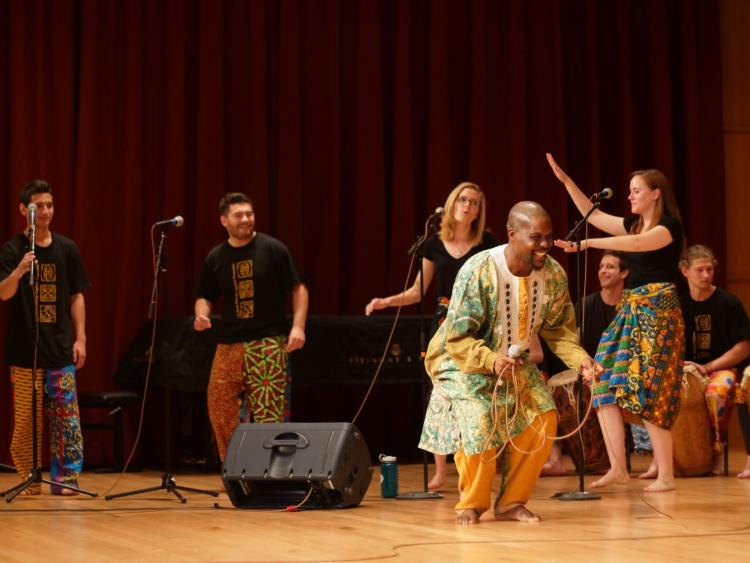 If you’ve ever been wandering Macky Auditorium on a Monday evening and heard the distinct sound of African drumming rumbling through the corridors, your ears were not playing tricks on you.

For years, the West African Highlife Ensemble has brought together music majors and non-music majors to perform the high-energy, tightly knit highlife dance music that Ghana is known for. And this Saturday, the ensemble puts on its semester-ending concert in Grusin Music Hall.

CU Boulder’s ensemble was the first of its kind in the United States. “Audience members always enjoy themselves because this group is inclusive and teaches students to be global citizens,” says Maputo Mensah, a native of Ghana and director of the ensemble. He says the irresistible music, characterized by jazzy rhythms and traditional African melodies performed on Western instruments, almost always leads to dancing in the aisles of Grusin.

“This music teaches us to be a part of what is happening and makes us come together as one people and one love and one world,” Mensah says.

The ensemble meets as a class during both the fall and spring semesters, providing what Mensah says is a good comparison and contrast to the Western musical tradition. Students don’t read music; instead, they listen and play it back. They dance in addition to playing instruments.

The most important aspect of the West African Highlife Ensemble is the sense of family that Mensah hopes to nurture among the participants. Brought up in a musical family in the capital city of Accra, Ghana, Mensah himself has been drumming and playing highlife music with his family since he was a child.

“The class creates family values. We all care for one another and are there for each other,” Mensah explains. “I have created a relationship with the students that means that if they are having a problem with the music or the rhythm, I can help them see how it comes together and how they are reflected in the music themselves.”

He hopes that same sense of support is communicated through the traditional costumes, dance and music that audience members see on stage during the ensemble’s concerts.

The West African Highlife Ensemble is in concert on Saturday, Dec. 1, at 7:30 p.m. in Grusin Music Hall, part of a weekend full of world music that continues Sunday with the Japanese and Gamelan ensembles. Find more information about these free concerts on cupresents.org.

If you’re a CU student interested in enrolling in the ensemble for three credits in the spring, you can find more information in the CU Course Catalog. The West African Highlife Ensemble is section 003 of course number EMUS 1467.

MarieFaith Lane, a current graduate student and Holiday Festival 2021 concertmaster, offers a first-person perspective on the spirit of this weekend’s community event. END_OF_DOCUMENT_TOKEN_TO_BE_REPLACED

Check out this Q&A with Eunjeong (EJ) Lee, including tips for applying to the College of Music, advice for a successful audition and more. END_OF_DOCUMENT_TOKEN_TO_BE_REPLACED
Return to the top of the page