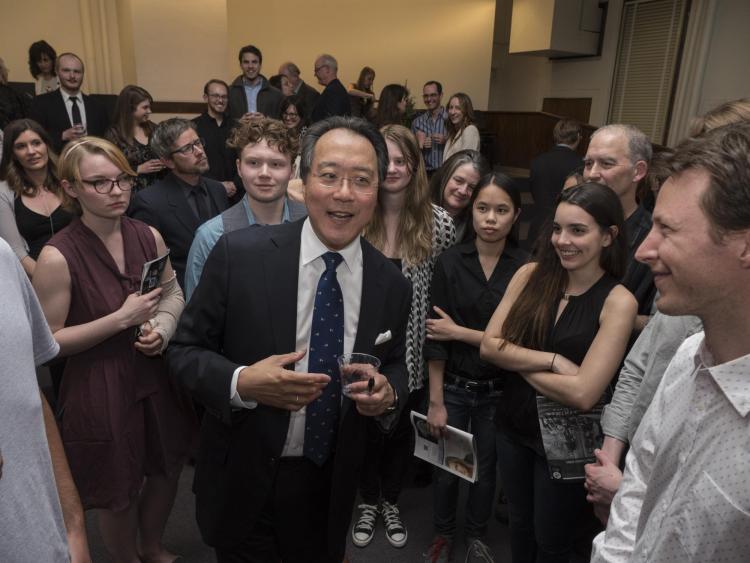 It’s not your usual mid-summer gig, but it’s one that several members of the CU Boulder Horn Studio won’t soon forget.

This Thursday, renowned cellist Yo-Yo Ma—fresh off a solo performance of the Bach cello suites at Red Rocks the night before—will kick off a “Day of Conversation and Action” with a rally co-hosted with Gov. John Hickenlooper and the Colorado Symphony in Denver’s Civic Center Park. And four student horn players from the College of Music will perform for the audience.

Junior Maggie Barnes is one of the student musicians. “I am so excited to get to meet Yo-Yo Ma and Governor Hickenlooper,” she says. “It means the world to me to get to be a part of this monumental occasion!”

Barnes and doctoral student Raya Panova, master’s student Josh East and senior Erika Hollister were invited by the Colorado Symphony to perform the opening fanfare at the rally, which is part of an ongoing effort by Ma to bring music into underserved communities. Associate Professor of Horn and Colorado Symphony Principal Horn Michael Thornton says his studio has always had a close working relationship with the horn section of the symphony.

“It’s important that the flagship music institution in the state have that kind of partnership with the most well-known and respected orchestra in the state,” Thornton says. “We are proud that in the case of this event, the Colorado Symphony chose our studio to represent the best of young musicians in the state of Colorado.”

Thornton says for the past several years, either the CU Horn Choir or the Colorado Horn Quartet has performed before a symphony concert at Boettcher Concert Hall. Horn students also recently performed at a Beethoven and Brews event with the Colorado Symphony horn section.

“I am so excited to perform for such influential people,” says Erika Hollister. “CU has provided countless opportunities for me as a musician and I am so grateful.”

The rally starts at 9 a.m. on Thursday, Aug. 2, at the amphitheater in Civic Center Park. According to a press release from Ma’s team, the cellist and activist will visit Aurora, Westwood, Five Points and Mariposa later that day to talk about the role of culture in making Denver’s neighborhoods stronger.

Longtime college supporters Jeannie and Jack Thompson gave a gift naming the dean’s office in the expanded Imig in honor of Bruce and Marcy Benson. END_OF_DOCUMENT_TOKEN_TO_BE_REPLACED

In part two of this blog series from junior Curtis Sellers, we have tips for how to make the most of your time as a student at the CU Boulder College of Music. END_OF_DOCUMENT_TOKEN_TO_BE_REPLACED

For Claire Glover (BME ’17)—recipient of the Colorado Music Educator Association’s 2020 Young Music Educator Award—the mentorship she received at the College of Music is key to her success. END_OF_DOCUMENT_TOKEN_TO_BE_REPLACED
Return to the top of the page