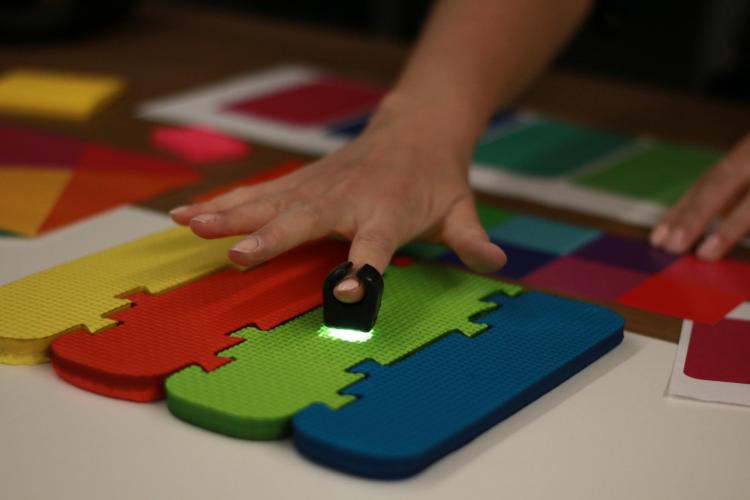 Specdrums—a new venture dreamt up by a CU engineering student—makes music using only color, an app and a little silicone ring.

Jenna Palensky is an ethnomusicology PhD student studying musical tourism in the Republic of Georgia. In one way or another, music has always been a part of her life. But she never thought it would take this form.

“I actually got to solder batteries onto USB ports. We’d have a bucket of silicone, dye and molds, and we’d spend evenings making these rings.”

Palensky is one of four full-time employees at Boulder-based startup Specdrums. She and the other members of the team create and market rings that fit on your finger and play music through a smartphone app.

“The ring turns color into sound,” Palensky explains. “You assign certain colors to certain sounds in the phone application, and the ring has a color sensor inside of it. When when you tap on certain colors, you make music.” Check out the Specdrums website for a demo.

In the past year, the Specdrums team was a runner up in the CU Boulder New Venture Challenge, spent three months refining its product and pitch at Catalyze CU, moved into an office at downtown Boulder’s Galvanize startup workspace, and filled an order for 5,000 Specdrums rings thanks to a Kickstarter campaign.

Then this spring, Specdrums took home the grand prize in the New Venture Challenge—and $75,000 worth of money to get the venture off the ground.

“Catalyze CU really changed everything,” Palensky says. “It was startup bootcamp. We tested with about 10 people a week, which is kind of a scary process. You don’t want to hear anything negative, but that’s kind of the best thing you can hope for. It really helped us define what we were doing more clearly.”

“I was speaking to music students about my experience in the NVC when I met Steven. I remember him so vividly because he was so humble about his idea, and I thought it was just brilliant. Then a couple of weeks later, he asked me to join the team.” 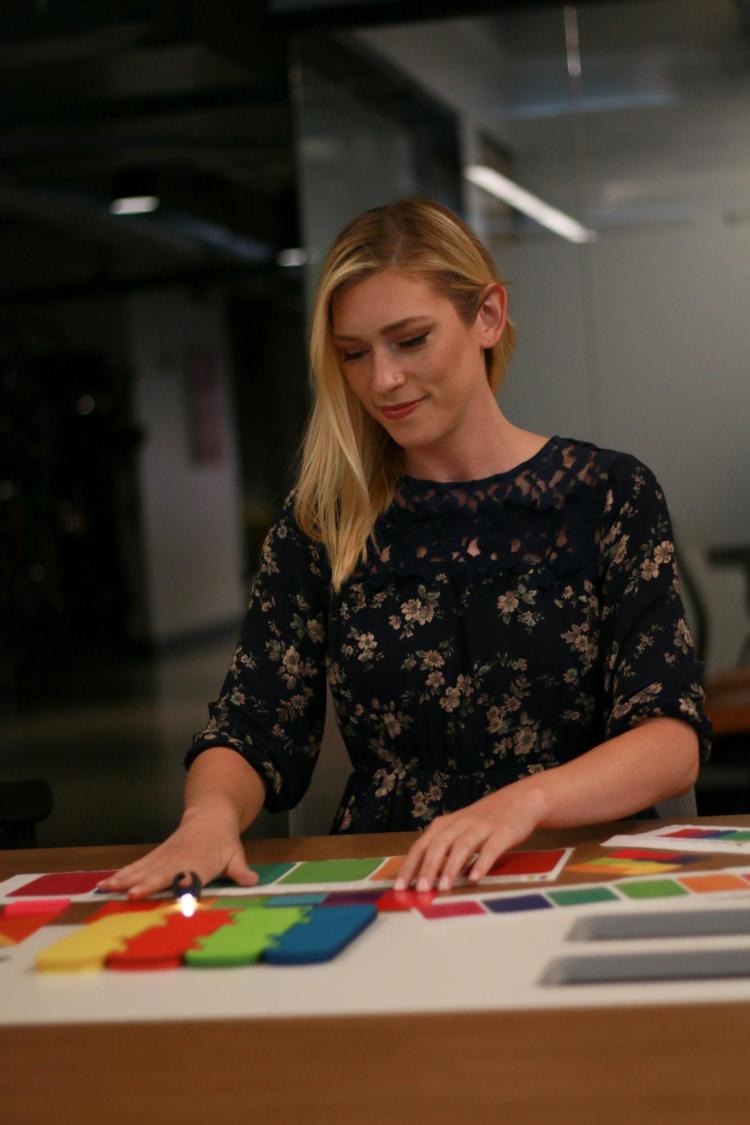 Dourmashkin, a percussionist from Long Island, first came up with the idea for Specdrums when he was at Cornell University studying engineering. “He obviously couldn’t bring his drumset with him to his dorm, so that’s where the idea came from.”

Palensky is now director of education at Specdrums, whose primary customers are elementary school music teachers. “So many music teachers have caught on to this little device. The kids love it, the teachers love it, it’s fun for both sides. It’s a great way to bring technology into the classroom, and that’s not always the easiest thing to do.”

And at a time when music programs are struggling, Palensky says this ring could be a musical lifeline for some children. “Especially in light of the fact that so many music programs’ funding is being cut, teachers are looking for effective and less expensive ways to teach music.

“People see this as a great learning tool, with big potential to help kids who have learning disabilities. We’ve also had interest from music therapists because there’s something amazing about the use of music and color as therapy. This is an unprecedented tool in that regard.”

It’s the kind of venture that Jeffrey Nytch—director of the College of Music’s Entrepreneurship Center for Music—says music students should be empowered to pursue.

“It’s important for our students to have an avenue to develop their ideas and get them in front of mentors and supporters from the community,” he says. “It’s also important for the college because it increases our visibility in a space where we haven’t been very visible.”

Palensky says the ECM was instrumental in her evolution as an entrepreneur. “It made me believe that being a working musician is not a one-way street. It can evolve into a multi-dimensional life if you allow it to. I would not be in my position without the ECM and I am indebted to Jeff Nytch and [past interim director] Peggy Bruns for all of the help I received.”

As for the future of Specdrums, the long nights of soldering batteries in the founder’s apartment are over: The company is now working with a manufacturer in Houston to build rings to meet growing demand. Palensky says she’s excited to lend her own expertise as the company scales.

“I’m the musician of the group, and my tech skills aren’t up to speed yet, but whenever I tell tech people about these rings, they’re really interested in my take as a musician. I feel like I contribute something valuable to this group by connecting what we have to offer with people who may be interested."

Specdrums will be busy filling orders all summer, but if you want to get on the waitlist, visit the company’s website.

Longtime college supporters Jeannie and Jack Thompson gave a gift naming the dean’s office in the expanded Imig in honor of Bruce and Marcy Benson. END_OF_DOCUMENT_TOKEN_TO_BE_REPLACED

In part two of this blog series from junior Curtis Sellers, we have tips for how to make the most of your time as a student at the CU Boulder College of Music. END_OF_DOCUMENT_TOKEN_TO_BE_REPLACED

For Claire Glover (BME ’17)—recipient of the Colorado Music Educator Association’s 2020 Young Music Educator Award—the mentorship she received at the College of Music is key to her success. END_OF_DOCUMENT_TOKEN_TO_BE_REPLACED
Return to the top of the page