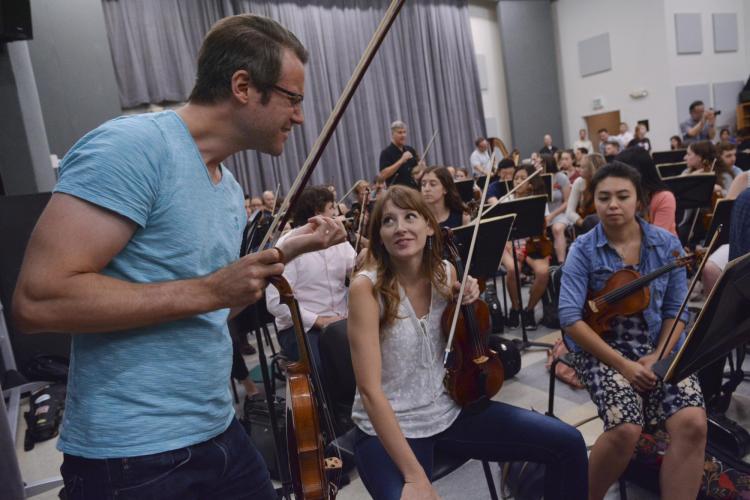 Another September, and another visit with members of the world-class Cleveland Orchestra, has come to a close at the College of Music.

But just as October brings the new energy of a change in season, the recent residency brought new energy to the halls of Imig Music.

“The biggest benefit for me was improving my own personal playing and seeing what it’s like to be a professional musician, which is what I hope to be in a few years,” says violin doctoral student Ryan Johnson. He was one of the many students who benefitted from the three-day event, part of the Daniel P. Sher Master Class Program.

But it was more than just rubbing elbows and talking shop—even for the Cleveland musicians themselves.

“It’s extremely inspiring for us,” says Stephen Rose, principal second violin of the orchestra. “The chance for us to work with these amazing students, who already receive such phenomenal teaching through the year, and to talk about what we do in our daily life is a great opportunity for us and for them.” 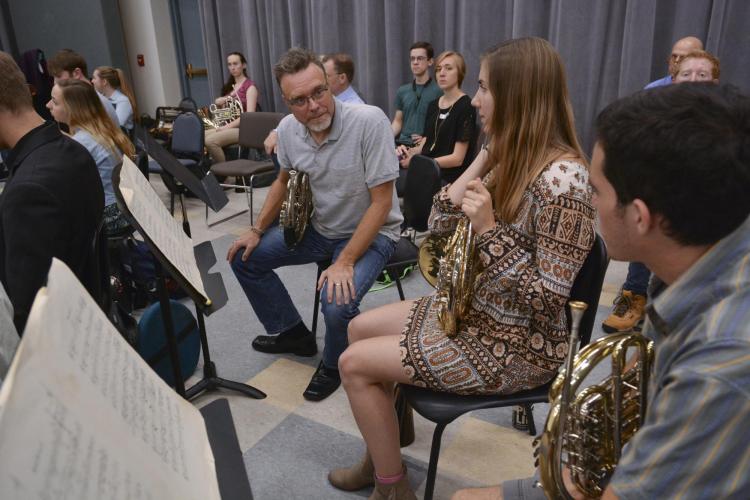 In addition to the massive side-by-side rehearsal—Rose and his colleagues sat in with their CU counterparts as the Symphony Orchestra ran through the program for their first concert of the season—master classes, sectionals and one-on-one coaching sessions that have been the hallmark of the residency since it began in 2013, this year’s visit also included a special Faculty Tuesdays recital featuring the out-of-town musicians.

“This was our first year that we could put on a concert. The audience was full and enthusiastic,” says Rose. “That’s as good as it gets. To get a chance to work with the faculty musicians here and make friends or reunite with friends on stage is great.”

For Assistant Principal Flute Marisela Sager, the highlight of the trip was the enthusiasm of the College of Music students. “My favorite part of the week was the curiosity that the students brought. I felt like the flute players had saved up all their questions from the last time we were here, and it was nice to have back and forth and energy as I answered them.”

Johnson, who is in the first year of his terminal degree after completing a master’s at the college in May, says he learned a lot even by just observing.

“It was great to watch all the Cleveland musicians work with the undergrads in our orchestral excerpts class. Watching all of their different teaching styles was illuminating.”

The residency was made possible by a generous gift from the Clinton Family Fund. Bruce Clinton is a longtime philanthropist and supporter of orchestras around the country. He says he was inspired to support the College of Music by the excellence of the college’s musicians and its leaders.

“[Former Dean Daniel Sher] introduced the idea to us and asked if we’d be interested. When we saw the music program here, we could see that it was simply outstanding, so we decided to lend our support. And now [Dean Robert Shay] has taken this event over and done so much more with it. It has a life of its own now,” Clinton says.

“Music is probably the most important aspect of our cultural existence. Helping young people who are pursuing a life in music is important, and it’s a rare opportunity for us.”

A recent $150,000 gift from the Clinton Family Fund will support two more visits to Boulder for members of the Cleveland Orchestra over the next several years.

Olivia Huizar Conner shares how her background inspires her to promote Diversity, Equity and Inclusion (DEI) in music. END_OF_DOCUMENT_TOKEN_TO_BE_REPLACED

Alumna Annie Booth shares how the College of Music continues to impact her career as an award-winning jazz pianist, band leader, composer/arranger and educator—and offers valuable career advice. END_OF_DOCUMENT_TOKEN_TO_BE_REPLACED
Return to the top of the page