When music marches down a different path 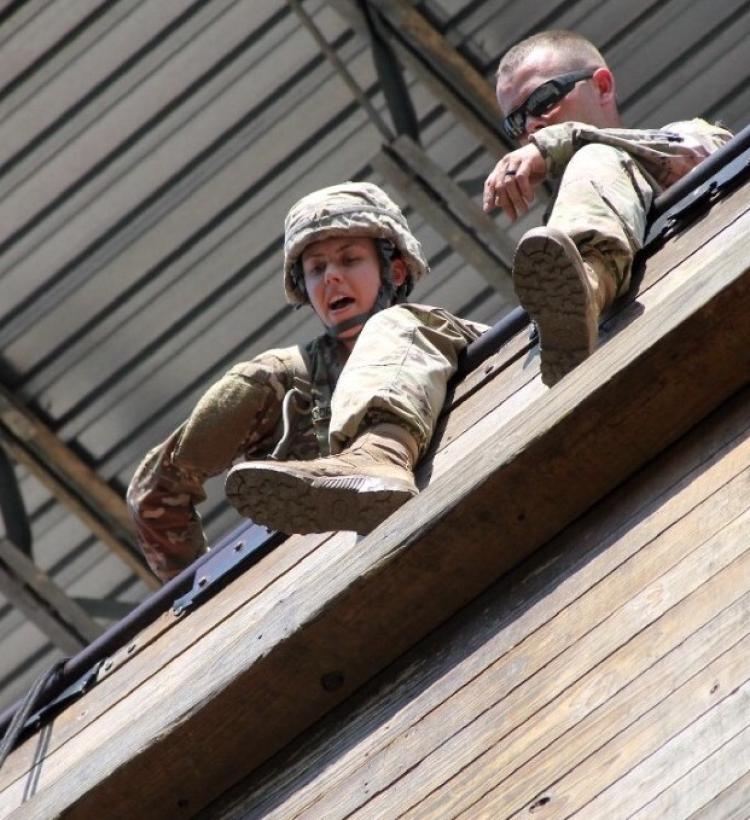 Waking up at 3:30 a.m., rappelling off a 60-foot wall and learning how to use a gas mask aren’t part and parcel of most post-music-school gigs. But then again, neither is the chance to work day-to-day with one of the top ensembles in the country.

For Sara Corry, though, it’s all just another day in the life.

“I’m getting in shape, and I get to sit down at my desk every day and write music. It’s pretty cool.”

Corry, who is in her final year of her doctoral degree in composition at the College of Music, is working full time as a staff arranger for the Army in Washington, D.C. She’s one of three arrangers working with The United States Army Band “Pershing’s Own."

Though she’s a musician by training, the newly minted staff sergeant says it wasn’t a stretch to see herself in the military.

“I had military in my family—Air Force and Marines on both sides. So I’ve always wondered if I could make it through basic training.”

The California native says the unique opportunity to march in her grandfathers’ footsteps was part good timing and part good training. She came across the opening on the American Composers Forum job board and applied as part of a class project in a course taught by Dean Emeritus Daniel Sher.

“The course was called Teaching in Higher Education, and for one of the projects we had to apply for a job. I saw this posting and, with Dean Sher’s help, put together a separate application from the one I use for academic positions. These kinds of positions don’t come up very often, so it was the right time to be looking.”

It was after she landed the gig that Corry says the real work began. She started 10 weeks of basic training at Fort Jackson, South Carolina, last fall—a whole new world for a musician.

“Basic was really tough. I had to learn to tie a harness and fire a gun; I ran and marched a lot. Each member of my platoon had to dig a ‘fox hole’ and spend four days down there, with smoke grenades and blanks flying. It was a great experience to go through.

“I also got to meet a lot of different people. Every active duty soldier goes through basic, so I was there with 17- or 18-year-olds who were going into combat roles.” 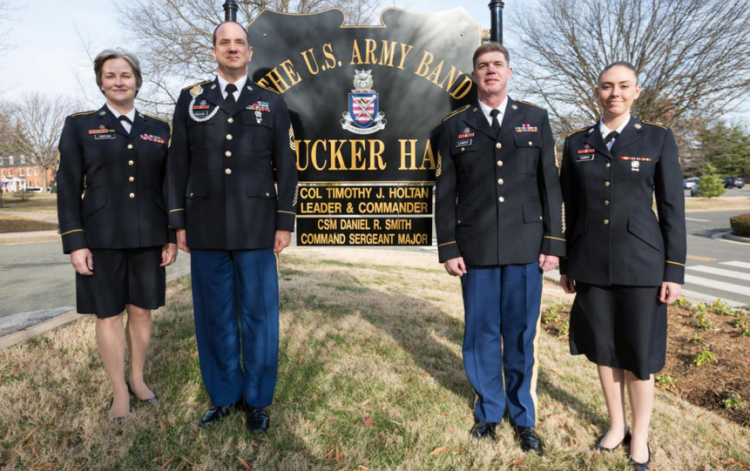 After completing training, Corry set up shop at Joint Base Myer-Henderson Hall in Arlington, Virginia, where she dove right into her training as an Army arranger for the band’s annual holiday performances at historic DAR Constitution Hall. “That’s one of the bigger events that we arrange for,” she explains. “But we also write for Twilight Tattoo and many outreach programs.

“Basically any piece the band is going to need, they come to the arrangers and they tell us what they want to play—and we figure out how to do it. We cover everything from instrumentation to adapting for outdoor venues.”

Even though basic training is over, Corry says there’s still plenty to remind her that she’s a soldier first.

“Every day, we’re doing some kind of physical activity and training,” she says. “It is much more relaxed—there’s no one telling you to drop and give them 428 pushups, which was my drill sergeant’s favorite number—but there’s still that military aspect to everything.”

And there still are those reminders of just how lucky she is, as a musician, to be in the position she’s in.

“I’m working with some of the best musicians in the country—and they’re very involved in the community as a way to make the military more accessible. Right now, I’m arranging for The U.S. Army Strings, which performs at the White House and for other notable military and government functions.

“For me, this position is the best of both worlds. I am kind of an outdoorsy musician, I like skiing and being active, so the Army is a surprisingly good fit for me.”

Though she’s on active duty in Arlington, Corry hopes to finish her doctoral studies next fall.

Assistant Professor of Composition Annika Socolofsky blends the realms of art and science through the Instrument Design Lab (IDL). The course offers a science-based context to instrumentation, sound and musical creation, giving College of Music students a foundation in the science of music. END_OF_DOCUMENT_TOKEN_TO_BE_REPLACED

It was a busy fall for the American Music Research Center (AMRC)! One of the... END_OF_DOCUMENT_TOKEN_TO_BE_REPLACED

Friends, My heart is heavy. Associate Professor of Violin Charles (Chas) Wetherbee passed away on... END_OF_DOCUMENT_TOKEN_TO_BE_REPLACED
Return to the top of the page