A colorful history in music 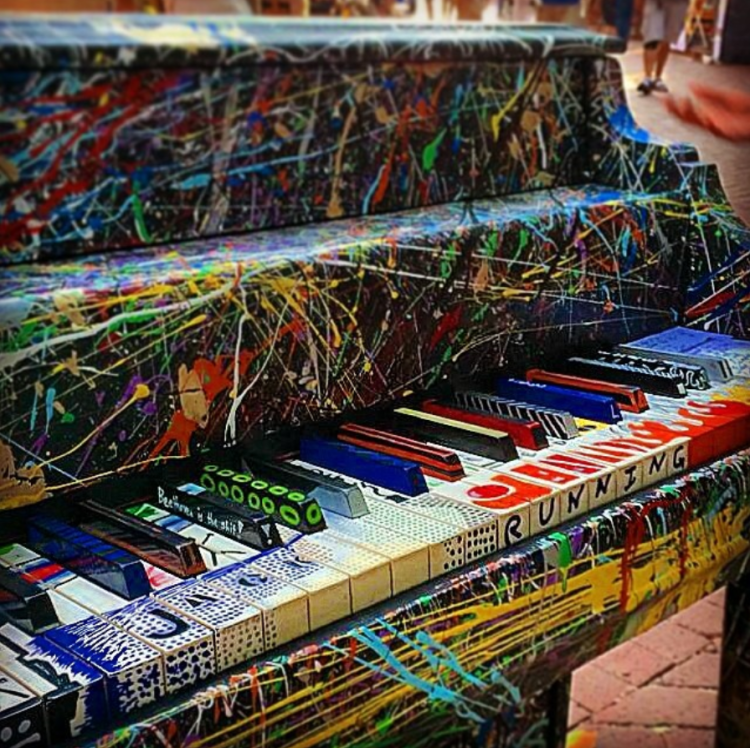 If you’ve ever stopped to enjoy the music drifting from a painted piano near the Pearl Street Cheesecake Factory, then you’ve been exposed to the many talents of first-year composition student Jack Gaffney.

Gaffney not only writes the tunes he taps out but also covers the piano in his own abstract art. It’s a true multimedia representation of a young artist just beginning to make waves at the CU Boulder College of Music.

“The piano on Pearl Street is the first one I painted, and I’ve done four more since. I want to keep doing it because it’s an interesting canvas to work on.”

The musical side of Gaffney’s artistic prowess will be on display this Wednesday as he premieres his three-movement piano piece “Drive” at the first Pendulum New Music Series concert of 2017. The piece will be performed by graduate student George Ryan.

“It was almost exclusively what I did last semester in my private lessons with [Associate Professor of Composition] Daniel Kellogg,” Gaffney says of the piece. “It’s an experimentation on different styles and ideas.

“I don’t have a clear message for the music … I’m more interested in what the piece means to the audience.”

The 19-year-old Boulder native has plenty of experience with different types of musical tastes. He’s called the corner of 14th and Pearl his summer home for about five years, singing and playing his own original songs, but his musical background goes further back than that. He’s been playing piano since he was 4 years old, following in his two older sisters’ footsteps. He started taking singing lessons at age 9. And he’s been writing music since the fourth grade.

“That was when my connection to music got stronger. I saw U2 live in concert and they inspired me to start writing songs,” Gaffney recalls.

When he got into high school, Gaffney started to broaden his artistic horizons. What started as a way to focus in class evolved into an entirely different, yet complementary, passion.

“I would doodle obsessively in high school, and it would help me focus. After a few years, I realized I had gotten deep into abstract art and I started to do some more intense things with it.”

Among those projects is the splatter-painted piece of piano artwork he plays on Pearl Street.

“It was a complete mess to do it,” Gaffney says, laughing. “I ruined some clothes and I had to put plastic on the walls and ceilings of my parents’ garage. But it was totally worth it.”

Recently, Gaffney’s two passions merged and took on a philanthropic twist. As a veteran of piano movement and storage—Gaffney and his father load and unload his small upright into a flatbed trailer before each of his summer Pearl Street busking gigs—he decided recently to give the gift of music back to the community that has nurtured his affections.

“There are an abundance of free pianos on Craigslist. If you have the means to move them, then they’re yours. So I figured I could get these pianos for free and then give them away.”

Gaffney didn’t have to look far for the first place to help out: He gave his first piano to his classmates at Boulder High School.

“After I saw what an impact a piano can have when people are able to play consistently on a cool looking instrument, I started to look for another place in town that would really appreciate something like that.” 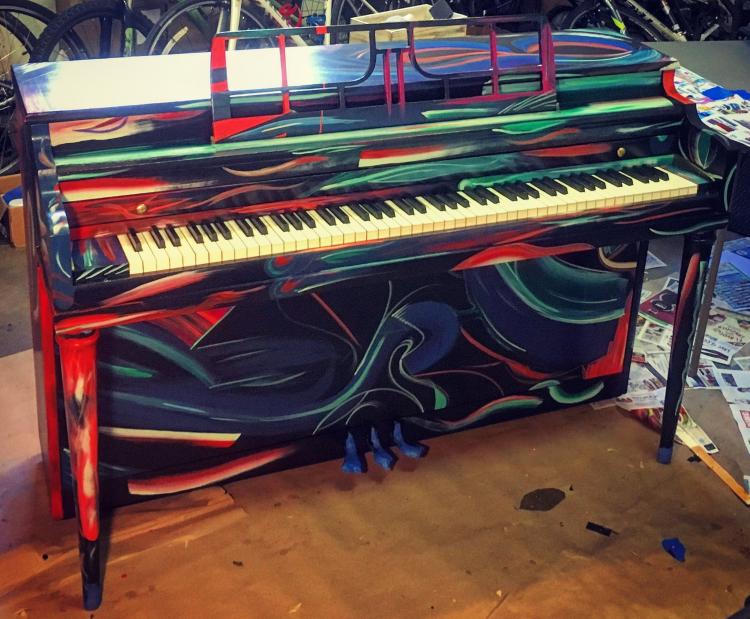 The piano Gaffney painted for Attention Homes is meant to invoke motion and the idea that you must always be moving forward.

He found Attention Homes, an organization that provides community and support for at-risk youths in Boulder.

“Whether these young people are homeless or struggling with drug abuse or some other issue, Attention Homes gives them a way to get back on their feet. And now my piano is sitting in the living room of a house where they live, ready for them to play whenever they want.”

Gaffney says the artwork he chose for the Attention Homes piano is meant to signify motion—the idea that you are always moving forward. It’s an important notion, he says, for the people the organization helps.

“Music allows you to confront yourself and your own problems. It has the power to give a voice back to someone who may have lost it.”

For Gaffney, too, music provides that outlet.

“Composition gives me a chance to say something in a new way that maybe hasn’t been said before.”

Hear Jack Gaffney’s “Drive,” along with three other world premieres, as the Pendulum New Music Series returns to Grusin Music Hall on Wednesday, Feb. 1 at 7:30 p.m. The concert is free and open to the public. ​

Assistant Professor of Composition Annika Socolofsky blends the realms of art and science through the Instrument Design Lab (IDL). The course offers a science-based context to instrumentation, sound and musical creation, giving College of Music students a foundation in the science of music. END_OF_DOCUMENT_TOKEN_TO_BE_REPLACED

It was a busy fall for the American Music Research Center (AMRC)! One of the... END_OF_DOCUMENT_TOKEN_TO_BE_REPLACED

Friends, My heart is heavy. Associate Professor of Violin Charles (Chas) Wetherbee passed away on... END_OF_DOCUMENT_TOKEN_TO_BE_REPLACED
Return to the top of the page