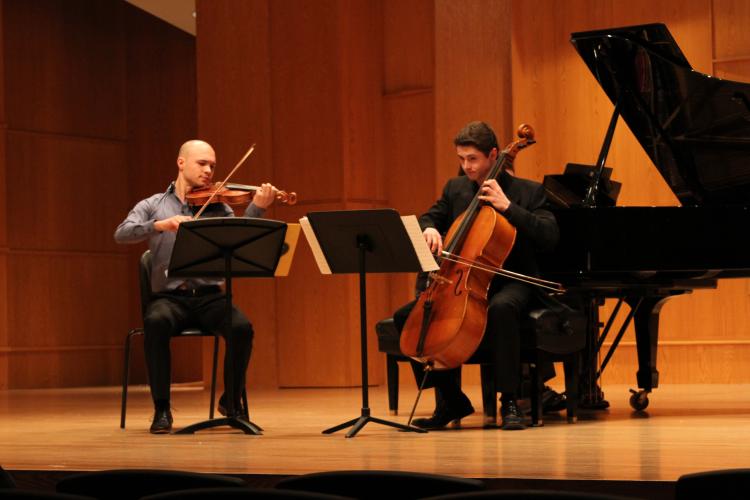 Dakota Cotugno has had his tickets to February’s Yo-Yo Ma Artist Series concert hanging up in his room since the day he got them.

“I’ve been listening to him since sixth grade.”

That was when the junior cello performance major fell in love with the cello—and the idea that he could make music his life’s work.

“It was the first instrument that felt personal,” Cotugno says. “The cello had a very intimate feeling compared to other instruments I had heard, and that drew me to it.”

Cotugno will bring that passion to the stage this Thursday as he performs Elgar’s Cello Concerto in E minor with the University Symphony Orchestra.

“I’ve performed this piece before, but never with an orchestra. I love the cello part and the orchestra part.”

Last February, as a sophomore, Cotugno won the undergraduate division of the College of Music’s Honors Competition—the reward for which is a solo performance with the orchestra. Cotugno says the experience has brought his playing to new levels.

“It was nice to devote myself to something and have it pay off,” he explains. “I was able to study with [Assistant Professor of Cello] David Requiro more closely and learn some core things about music and cello playing, which is one of the real rewards.

“It’s been inspiring to develop a relationship with David and see how it’s changing how I play.”

The Longmont native has never had a shortage of musicians in his life to inspire him. He grew up in a family of performers: His mother is a singer, his stepfather owns a guitar shop in Longmont and each of his three siblings is a musician as well.

“And my dad plays piano,” Cotugno adds. “He got a master’s in jazz performance from Indiana University and played on cruise ships for eight years before coming to Colorado to teach lessons and play church and wedding gigs. My family has been a big inspiration.”

Even with all that talent around him, he said he never once felt pressured to be a musician as a child.

“My parents told me from the beginning is that if this was what I wanted to do, then I could. But they didn’t want it to be something I had to do. And that has made me appreciate and enjoy it all the more.”

Though he started his musical studies on piano, Cotugno began playing cello at age 12 and quickly realized that he had found his passion.

“The first really great experience I had was playing in the All-State Orchestra. We played some really challenging pieces and rehearsed for eight hours a day. It was the first immersive experience I had with music.”

Cotugno says it was the opportunity to work with professors like Lewis—who was just named a Master Educator for Yamaha—that made him stay close to home for his undergraduate studies.

“CU is a lovely place, and that’s exactly what I need right now. We also have talented faculty, the Aspen Music Festival nearby and the Takács Quartet in residence. We’re blessed musically to live here.”

As a fractured concert-going Boulder recovers from a particularly stressful election cycle, Cotugno is reminded of one of the most important roles music has played in his life.

“It’s nice to connect with people. Music is such a huge part of our lives. It brings people together. To be part of something bigger and unifying like that is special.”

And perhaps that’s exactly what the audience will be looking for during Thursday night’s concert.

Dakota Cotugno, Gary Lewis and the CU Symphony Orchestra are in concert this Thursday, Nov. 17 at 7:30 p.m. at Macky Auditorium. The concert is free and open to the public.

Curiosity drives Lydia Wagenknecht, a PhD candidate in ethnomusicology and recent recipient of a Fulbright Research Award. “I care that my research will help us understand something in a more broad-based way that we didn’t understand before,” she says. END_OF_DOCUMENT_TOKEN_TO_BE_REPLACED

We’re so excited to welcome alumnus Damani Phillips back to campus this week and to present him the College of Music’s 2022 Distinguished Alumnus Award at our commencement ceremony on May 5! “The versatile training provided by CU has been the cornerstone of my success to date, and has enabled me to do and be many things well beyond typical expectations,” he says. Meet Phillips and discover his powerful advice to graduating Music Buffs. END_OF_DOCUMENT_TOKEN_TO_BE_REPLACED

On May 5, we look forward to welcoming back Judith Glyde, formerly professor of cello and chamber music at the College of Music and chair of our string faculty. Since retiring in 2014 to live in New York City, the professor emerita she has been active with the college’s alumni community there, offering tremendous support to Forever Buffs who are now living and working in the city. END_OF_DOCUMENT_TOKEN_TO_BE_REPLACED
Return to the top of the page