The power and importance of rock music 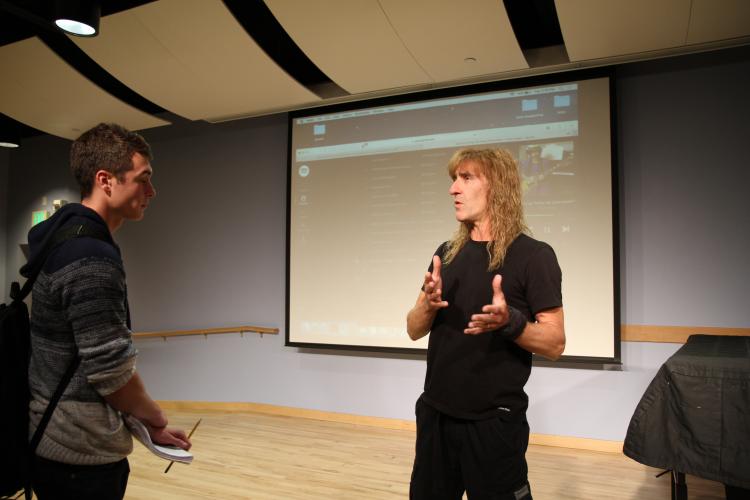 Mike Barnett is on a mission.

The long-time rock drummer—recognizable in the halls of Imig Music by his long hair and all-black attire—wants students at CU Boulder to recognize that they have a role to play in the world around them. That they have a voice that can—and should—be a part of the national cultural and political dialogue.

And that music can provide a pathway to understanding that involvement.

“That’s what rock musicians and the culture are all about: Rock reminds us that we’re free to think for ourselves. You need to be free to say what you feel.”

Barnett is leading that charge by teaching a course on the history of rock. The class, which is offered every semester and open to non-music majors, is a deep dive into the nuts and bolts of rock music: Barnett spends some time on rock precursors such as the blues and jazz, but he’s primarily interested in giving students a well-rounded education on rock theory, rock legends and rock subgenres.

“I want to get into the meat and potatoes of rock,” Barnett says. “There’s a heavy focus on the Beatles, Zeppelin, singer-songwriters, progressive rock. It’s hard not to talk about Motown or disco, but that draws the focus away from rock, and I want this to be more in depth into everything rock.”

And he can offer that because Barnett literally wrote the book on rock music. This semester has been his first run at teaching out of the book he himself penned over the last year: “Rock: A Musical and Cultural Perspective.”

“The first edition officially comes out this spring, but we’re testing it this semester,” Barnett explains. “It was a lot of work—it took me away from composing for a year—but it’s good to be able to set my own course. And now I have no excuses about the textbook I’m using.”

A product of the era that birthed such greats as Pink Floyd, Van Halen and ZZ Top, Barnett has always seemed destined to pass on a love of rock music. Growing up in the 70s and 80s outside Pittsburgh, he was always drawn to music making—even if it wasn’t the easiest row to hoe.

“I grew up in a single-parent family and didn’t have the luxury of taking music lessons. My brother and I had to take newspaper routes and do other odd jobs to buy our instruments. Then, we had to teach ourselves to play.”

When it came time to go to college, Barnett says he didn’t consider it at first. He was a heavy metal rock musician leading that lifestyle—playing drums, writing and recording his own music, getting better. But there came a time when that just wasn’t enough.

“I started recording original music in my teens, writing rock and heavy metal,” Barnett recalls, “but eventually I got to a point artistically where I had more in my head than I knew how to get out. I lived in a college town that had a music program, so I enrolled there. I started composing chamber music and orchestral music.”

Barnett now holds degrees from Indiana University of Pennsylvania and CU. The rocker is a doctor of music, still composing, performing and recording regularly and trying to reach more students than ever as Music in the Rock Era expands from Imig's Chamber Hall into the 250-seat Music Theatre this spring.

“We have a lot of fun in this class,” Barnett says. “Most people get far more than what they expect. There’s music history, a little bit of theory and sometimes I even bring my drums to class and play.”

With his book and a breadth of personal knowledge to start from, he can focus not only on the music but also on the making of the music. Barnett’s class includes insights on music recording and production.

The approach makes the study of music more accessible for students outside the College of Music. Ian Kalra took Barnett’s class in Spring 2016. A fan of rock, jazz and blues music himself, he’s working toward a certificate in music technology.

“The class was a great experience,” Kalra says. “You don’t need any understanding of rock or music history because Mike starts at the ground level and brings his experience in the industry and his passion to class.”

Barnett says though he’s thrilled to be able to offer the course—which often has a waitlist 20 people deep—to more students, he would like to expand even further down the road.

“There’s so much content that we could cover here. I wish we could make this a multi-semester course.”

Because now, more than ever, Barnett says people need to learn from the ideals of the rock counterculture.

“A big part of what I want to do is get young people to think about their own position and importance in culture and society. Rock is very idealistic—it teaches us that things can always be better.”

Registration for Spring 2017 courses starts Oct 24. Look for Music in the Rock Era, MUEL-2852, in the CU Course Catalog.

Curiosity drives Lydia Wagenknecht, a PhD candidate in ethnomusicology and recent recipient of a Fulbright Research Award. “I care that my research will help us understand something in a more broad-based way that we didn’t understand before,” she says. END_OF_DOCUMENT_TOKEN_TO_BE_REPLACED

We’re so excited to welcome alumnus Damani Phillips back to campus this week and to present him the College of Music’s 2022 Distinguished Alumnus Award at our commencement ceremony on May 5! “The versatile training provided by CU has been the cornerstone of my success to date, and has enabled me to do and be many things well beyond typical expectations,” he says. Meet Phillips and discover his powerful advice to graduating Music Buffs. END_OF_DOCUMENT_TOKEN_TO_BE_REPLACED

On May 5, we look forward to welcoming back Judith Glyde, formerly professor of cello and chamber music at the College of Music and chair of our string faculty. Since retiring in 2014 to live in New York City, the professor emerita she has been active with the college’s alumni community there, offering tremendous support to Forever Buffs who are now living and working in the city. END_OF_DOCUMENT_TOKEN_TO_BE_REPLACED
Return to the top of the page