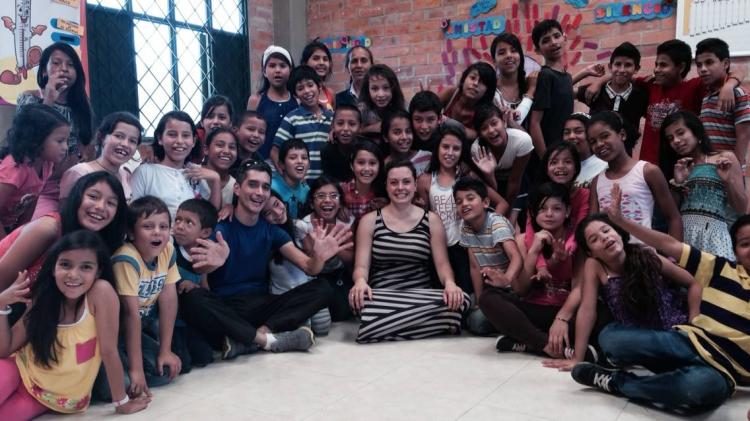 Whether you grew up in the Midwest or a South American capital city, music is music.

Corie Brown learned that when she was helping develop the choral program at La Fundación Batuta in Bogotá, Colombia.

From 2012 to 2014, Brown was in South America, working with children and adults displaced by civil strife—helping them learn music.

“Everyone should have a right to music education—just like food and clean water and shelter,” says Brown. “Music doesn’t replace those things, but it supplements children’s lives in a meaningful way.”

Now a first-year choral conducting and literature doctoral student at the College of Music, Brown’s love for music has taken her from Michigan to the other side of the world and back again. She grew up in the northern lower peninsula, about 30 minutes away from Interlochen Center for the Arts.

“The culture of the area I grew up in inspired me. Every year as a little girl, I would go to ‘The Nutcracker’ and other performances at Interlochen,” she remembers.

Brown’s been singing since childhood; she also grew up playing the flute and performing with community choirs. She says her mother, a visual artist, always understood the merit of the arts. “It was a creative household. I was always singing rounds around the kitchen table.”

After high school, Brown took that passion with her to Alma College to study music education. She taught high school choir in Michigan for a few years before heading to the south side of Chicago to teach K-8 music.

“It was different from anything I had done before,” Brown says. “Being in such a challenging neighborhood inspired me to think outside the box. That’s where I became interested in teaching at-risk youth.

“It appealed to me because while there’s a raw energy that all children bring to the study of music, those who don’t have as many resources available to them latch onto it in a more direct way.” 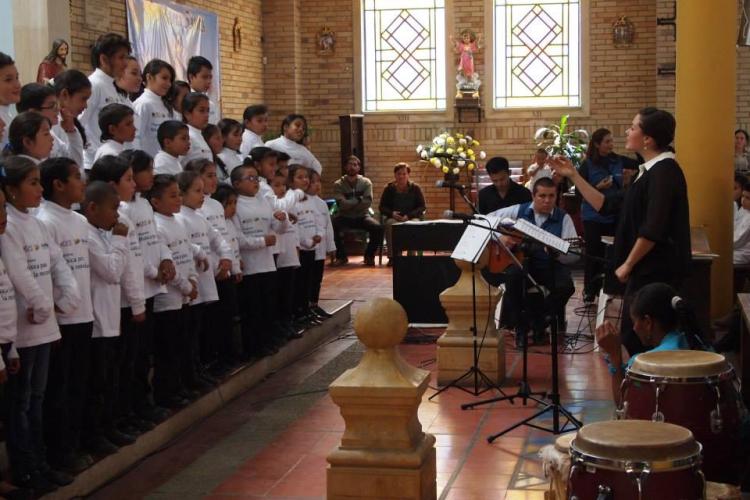 From there, through a connection with pioneering conductor Matthew Hazelwood, she went to South America and Colombia’s La Fundación Batuta. Based on El Sistema in Venezuela, the privately and publicly funded program enrolls around 50,000 people in a network of musical centers across the country.

“The centers use similar repertoire and the students get to travel for concerts with other centers. It was a really amazing thing to be a part of,” says Brown.

Though she was based in the country’s capital, Brown traveled outside Bogotá regularly, helping train teachers and students as the choir program expanded. “I’m really lucky,” she says. “I got to experience the joy in Colombian culture amid the hardship some of my students faced every day, and that taught me to slow down and bring that joy into the classroom. As a teacher, Colombia gave me the opportunity to take a hard look at how I teach and interact with the world.”

Another powerful lesson learned: Music, in a way, levels the playing field for children. “There were actually a lot of similarities between teaching in Bogotá and teaching in the states,” Brown says. “While children are incredibly unique culturally and in a lot of other ways, they respond to similar ways of interacting and teaching strategies.”

In 2014, Brown returned to the U.S. for graduate studies at the University of Oregon. She arrived in Boulder this summer. Though she’s still shaping her doctoral thesis, she says her work in South America is guiding her thought process.

“I want to look at the differences and similarities between El Sistema and Batuta and similar programs in the U.S. and look at the trend all over the world—to figure out what ‘at risk’ means in today’s world.”

Brown hopes that through choral music, she can spread a little light to the people around her. “There’s a lot of challenge and darkness in the world. Giving myself and my students and colleagues a way to communicate is my way of trying to make the darkness better.”

And the best way to do that is to work together.

“Choral singing is really being a part of a community where the whole is greater than the sum of its parts. Every day I come home thinking that I couldn’t do this alone. Together we’re able to make beautiful music.”

Brown conducts the Men’s Chorus at this Friday’s Fall Festival of Choirs. The free concert features all of CU’s choirs in a program with everything from jazz to Mozart. The music starts at 7:30 p.m. at First United Methodist Church, 1421 Spruce Street, in Boulder.

While these are uncertain times and the future seems equally uncertain, COVID-19 has pushed us to leverage technologies in impactful ways that will surely outlast this pandemic – through distance learning, collaboration and performing, we’ve risen to the challenge. END_OF_DOCUMENT_TOKEN_TO_BE_REPLACED

College of Music Dean John Davis sits down with us to talk about what’s on the horizon as the college begins a new year with a new dean. END_OF_DOCUMENT_TOKEN_TO_BE_REPLACED

As we approach the final deadline to apply to the College of Music, student ambassador Isabel Goodwin has compiled a few of her favorite things about being a CU Boulder music student. END_OF_DOCUMENT_TOKEN_TO_BE_REPLACED
Return to the top of the page