Marching to the beat of the Buffs 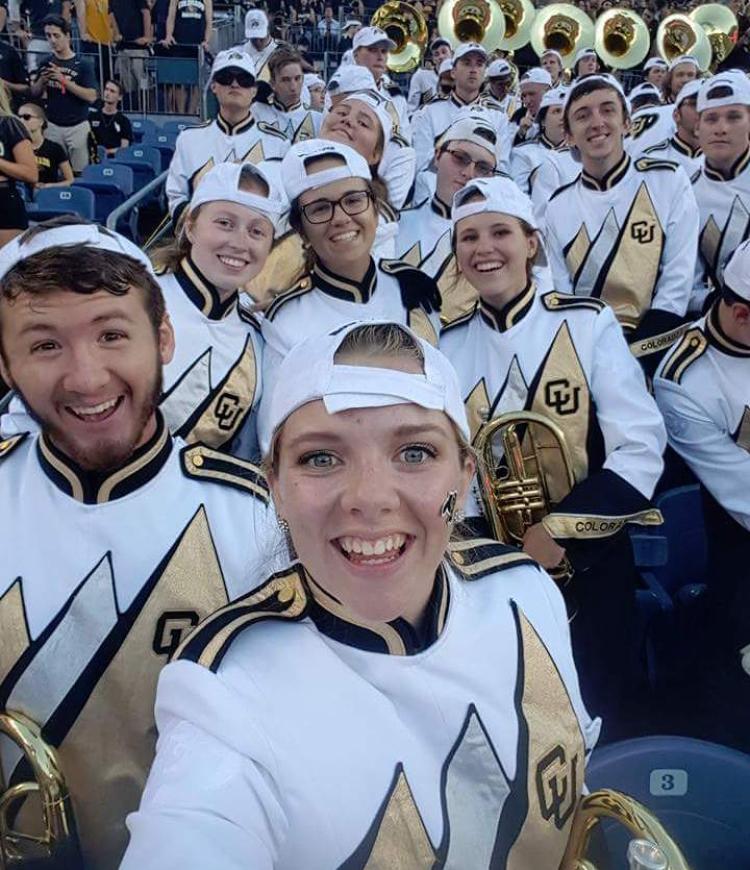 Sophomore Carrie Proctor with the mellophone section of the Golden Buffalo Marching Band.

Take a walk anywhere on campus in the late afternoon and early evening this time of year, and you’ll probably hear brass blaring “Fight CU” or drums pounding away at cadences. It’s officially marching band season at CU Boulder.

“I love this time of year, but I love game days the most. They’re really long and really tiring but they embody what it means to be a Buff!”

You could say the Colorado native has marching band in her blood. Proctor, a music education major in her second year with the Golden Buffalo Marching Band, is the third member of her family to march onto Folsom Field in the black and gold.

“One of my brothers marched trumpet and the other marched sousaphone,” Proctor says. Though they were never in the band together—her brothers had both graduated by 2011—her older siblings’ influence played a strong role in Proctor’s decision to join.

“They started marching when I was much younger, so I followed their lead and marched all four years of high school and was even drum major.”

It wasn’t just her brothers’ example that led Proctor to music: Her father marched in the drumline in high school and both her parents encouraged her and her siblings to take an interest in music from an early age.

“It’s always been a part of my life,” Proctor says. “Music can do so many things for a person. It connects you with people through this universal language; it gives you different ways to express yourself and different ways to learn.”

Now a section leader in the mellophone section, Proctor says it was her time as a drum major that inspired her to pursue music education as a career.

“I got to put my passion for music behind something constructive and see how music brings people together. It was just awesome,” she explains.

And as a college student, Proctor says marching band brought her some of her first and best friends. “Coming in freshman year, I didn’t really know anyone. My very first friends were people in my section. They made the college transition comfortable and now they’re some of my best friends.”

This fall, the Golden Buffalo Marching Band brings three new halftime shows to Folsom Field, including a Latin-inspired mix at this Saturday’s home opener. Other shows include a Journey tribute and a pop music program with songs by Beyoncé, Demi Lovato and Walk the Moon.

This season also sees the return of a featured twirler to the band’s ranks, a change Director Matthew Roeder says that, when combined with the band’s excellent leadership team, will make this a year to remember.

It was a busy fall for the American Music Research Center (AMRC)! One of the... END_OF_DOCUMENT_TOKEN_TO_BE_REPLACED

Friends, My heart is heavy. Associate Professor of Violin Charles (Chas) Wetherbee passed away on... END_OF_DOCUMENT_TOKEN_TO_BE_REPLACED

Longtime Associate Professor of Saxophone Tom Myer retired in May. As the year draws to a close, enjoy his insightful career reflections and advice … and discover what he’s up to now! END_OF_DOCUMENT_TOKEN_TO_BE_REPLACED
Return to the top of the page