Going back in time with Alicia Baker and her accordion 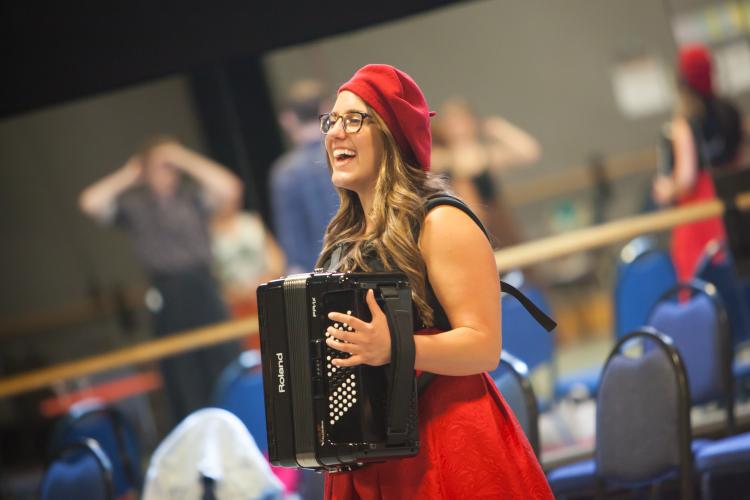 Alicia Baker is putting her accordion and singing skills to good use in this summer's Colorado Shakespeare Festival production of "The Comedy of Errors."

At this year’s Colorado Shakespeare Festival, audiences at “The Comedy of Errors” will be wooed back to 1930s Paris by the costumes, the set and of course, an onstage minstrel and her accordion. Because after all, what would summer be without the whimsical sound of the accordion?

For Alicia Baker, the answer to that question is simple: it just wouldn’t be summer.

“When I was six years old, we were on a family vacation and we ended up in Kimberley, British Columbia, during the Kimberley International Old Time Accordion Championships. I recognized the right side of the accordion because I had already been playing piano for two years, and my parents bought me one on the spot.

“After that, we went back for 16 summers in a row so I could compete.”

Baker, originally from Portland, Oregon, grew up in a musical family. Both her parents are choir teachers, nurturing in her a third musical passion: singing.

“So when I went to college at Oregon State University, I earned three bachelor’s degrees … in vocal performance, piano performance and music education.”

Now Baker is in the second year of her master’s in vocal performance and pedagogy at the College of Music. But she still plays her accordion in gigs around the world—including the Mary Rippon Outdoor Theatre this summer.

Baker’s turn as the resident accordion player during CSF’s “The Comedy of Errors” is the result of the company’s history of working with the College of Music to add tunes to its productions—and what Baker describes as a YouTube extravaganza.

“The festival’s crew was going through a roster of voice students, and they must have found out about my accordion because then they spent a lot of time looking at good and bad YouTube videos of me playing. They must have been impressed, because they asked if I wanted to audition.”

She wound up being hired as an actress and music director, giving her the opportunity to delve deeper into a beloved style of music.

“I love French culture. Musettes and French jazz café-style music are my favorite styles to play on accordion,” Baker says.

The gender-swapping that takes place during CSF’s “The Comedy of Errors” also appeals to her.

“The fact that I get to play the female strolling accordionist that fits with how we’re switching the roles is exciting for lots of reasons. Musically and dramatically I think it’s an awesome idea to set the play in this era, with women playing such strong roles.”

The Bard’s classic of comedy represents just one of the many unusual performance opportunities Baker has secured with her accordion. Though she’ll always sing and play piano, she says, the uniqueness of the accordion has been the catalyst for some of her favorite gigs, including jazz concerts.

“I love the accordion for its face value of course, but it’s also still kind of niche.”

“The Comedy of Errors” runs through Aug. 7 at the Mary Rippon Outdoor Theatre. For ticket information and showtimes, visit the Colorado Shakespeare Festival website.

Dean Robert Shay explains what the move to a temporary remote operating status from Sept. 23 through at least Oct. 7 means for the College of Music. END_OF_DOCUMENT_TOKEN_TO_BE_REPLACED

The Office of the Provost today announced four finalists in the search for the next dean of the College of Music. END_OF_DOCUMENT_TOKEN_TO_BE_REPLACED

The Entrepreneurship Center for Music is stepping up its work to promote student projects and businesses during the COVID-19 pandemic. END_OF_DOCUMENT_TOKEN_TO_BE_REPLACED
Return to the top of the page