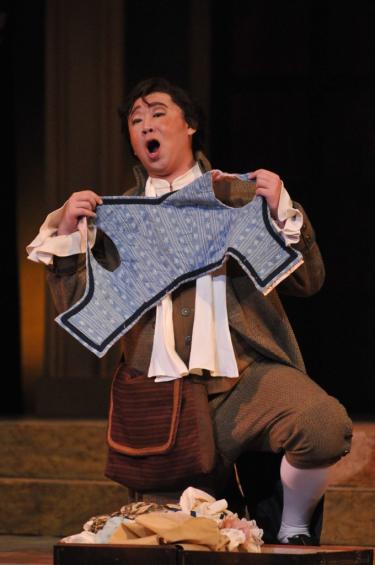 College of Music alumnus Wei Wu (MM '13) is having a big year, preparing for starring turns in Santa Fe and at the Met.

In the ultra-competitive world of professional opera, getting your name in the program of even one large production every couple of years could be considered a coup.

The next year for Wei Wu is shaping up to be a major victory.

From Washington to Pittsburgh to the Met to Santa Fe, the 2013 graduate of the College of Music is starring in several big-name operas at some of the grandest companies in the country.

But he’s not stopping there.

“I feel extremely grateful that this is happening at the beginning of my career,” Wu says. “These amazing and prestigious opera houses offer me a great opportunity to move forward.

“I often tell myself that hard work is the key, and from now on mistakes are not allowed on stage.”

Wu, who hails from Beijing, has been making a name for himself as a bass since leaving Boulder with a professional certificate and master’s degree. Right after graduation, he was accepted into the Domingo-Cafritz Young Artist Program at Washington National Opera.

Geared toward helping young artists get experience before entering the professional world, the program is considered one of the best of its kind. Wu got his chance to audition thanks to serendipity.

“During the last year of my master’s, I was invited to perform in The Tales of Hoffmann at the National Center for the Performing Arts in Beijing. The production was directed by Francesca Zambello, who is also artistic director at Washington National Opera.

“After the opera was over, she invited me back to audition.”

The two-year intensive workshop includes coaching, concerts and collaboration with other artists, opera companies and associations. It’s also highly selective—of about 1,000 applicants every year, only five or six are chosen.

Wu earned a third year with the program after its director, Michael Heaston, invited him to stay on for continued development. As the veteran, he says he’s continued to improve, and he’s even had a chance to perform more important roles in Washington National Opera productions.

“I’m very lucky to be a part of this program, which is one of the best in the opera field,” Wu explains. “I’ve had to work hard every day to be prepared for unpredictable opportunities. It’s opened a lot of doors for me.”

Also opening doors, he says, has been his decision to sign with a talent agency, Fletcher Artist Management in New York. Since getting an agent, Wu has landed parts at the Glyndebourne Festival Opera in England (Die Entführung aus dem Serail) and Pittsburgh Opera (The Rake’s Progress), with another gig in Pittsburgh and roles at the Met and Santa Fe Opera forthcoming.

“This is a very competitive career. There are tons of talented young opera singers out there. When you’re just starting out like I am, any offers from regional companies would have been wonderful. I definitely wasn’t expecting to hear from Santa Fe and Pittsburgh and the Met. I feel very lucky,” Wu says.

Next summer, Wu makes his debut in Santa Fe as Kôbun Chino Otogawa, spiritual advisor to Steve Jobs, in a new opera about the Apple founder written by CU Boulder alumnus Mark Campbell.

As he prepares for this and other big roles, Wu says the biggest determining factor in whether you have success in opera isn’t what you’re born with—it’s the work you put in.

“I think about 20 percent of it is the talent you’re given. The rest is working hard and being a good person.”

It was a busy fall for the American Music Research Center (AMRC)! One of the... END_OF_DOCUMENT_TOKEN_TO_BE_REPLACED

Friends, My heart is heavy. Associate Professor of Violin Charles (Chas) Wetherbee passed away on... END_OF_DOCUMENT_TOKEN_TO_BE_REPLACED

Longtime Associate Professor of Saxophone Tom Myer retired in May. As the year draws to a close, enjoy his insightful career reflections and advice … and discover what he’s up to now! END_OF_DOCUMENT_TOKEN_TO_BE_REPLACED
Return to the top of the page