Stepping up to the challenge 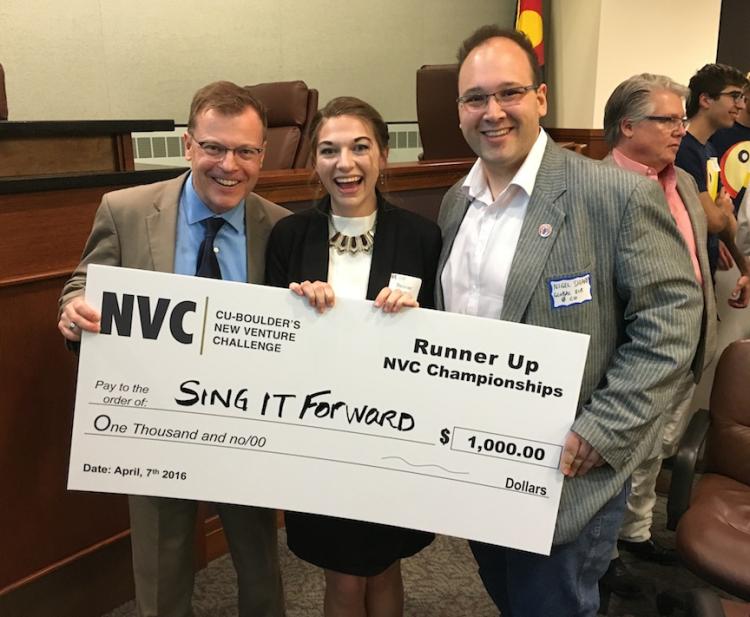 Brooke Murray holds her award check from the New Venture Challenge with Director of the Entrepreneurship Center for Music Jeffrey Nytch and Nigel Sharp, CU Global Entrepreneur in Residence.

Brooke Murray credits music with giving her her life back when she was a child.

“I was attacked by a dog when I was 6 years old. I missed a lot of school as I recovered, and when I did finally go back to school I was bullied by the other kids because of my scars,” she remembers.

“Then I started singing. Choir gave me back my confidence and my grades started going up.”

The native of the Aspen area says she knows firsthand what music can do for a person. And as she prepares to graduate this month, she wants to make sure that no one is ever denied that life-changing relationship.

The day before the CU-Boulder New Venture Challenge, Murray was close to giving up. She wasn’t sure her pitch for her non-profit organization Sing It Forward had the legs to stand up in the final round of the startup competition.

“My practice round didn’t go well at all. I decided to switch up the whole pitch at the last minute.”

Up against four other student entrepreneurs with ideas like beekeeping technology and smart farming, Murray brought to the event her passion for equal access to music and wowed the judges. Her idea—an organization that uses the pay-it-forward model to fund voice lessons for low-income students—grew directly from her personal experience with the power of singing. She wore that experience on her sleeve during her presentation.

“I had left my story out of the pitch the first time. This time, it had more impact.”

Even though Murray didn’t win the top prize, she finished as runner-up, winning $1,000 from the competition.

But it’s what happened after the awards were handed out that Murray says was truly overwhelming.

“One of the judges came up to me afterward and told me that he had been in an accident himself—he was paralyzed—and music was the only thing that got him through it and helped him begin to recover.

The judge, venture capitalist Jason Mendelson, offered Murray $5,000 in seed money to get Sing It Forward off the ground. An angel investor in the crowd followed suit.

In all, she went home that night with $14,000—and a renewed passion to bring her organization to life.

The idea for Sing It Forward’s payment system came from a story Murray heard a couple of years ago about a pizza parlor named Rosa’s in Philadelphia.

“You can go in and buy a slice for yourself, then pay $3 more to buy a slice for a homeless person. It just seemed so simple that I thought, ‘Why wouldn’t that work for voice lessons?’”

During her first music entrepreneurship class, Murray started to give the idea more thought.

“If a parent pays for a month of their own child’s lessons and puts down a bit more for another student’s, then eventually those lessons would be paid for,” she reasons.

With the help of Jeffrey Nytch, director of the Entrepreneurship Center for Music, Murray started gathering advice and support ahead of this year’s New Venture Challenge.

“I met with music teachers and people in the community, and they were excited about the idea,” she says.

Murray suspects the idea is resonating with people because they see the benefit—especially now—of making music accessible for all children.

“Music education programs are being cut from public schools across the country,” she says. “Low income students who don’t have the resources outside school to get that music education are being left behind.

But music shouldn’t just be for the elite. It’s for everyone.”

Taking the next step

As she prepares to graduate with a BA in music, a minor in business and a music entrepreneurship certificate, Murray is committed to seeing Sing It Forward through.

“I applied for Catalyze CU, which is a business accelerator program at the end of the summer,” she explains. “It pairs you up with mentors and other resources as you move your idea into the prototype stage.”

Murray is also talking with Denver Public Schools about a partnership that would test the Sing It Forward model in mixed-income neighborhoods where Murray suspects it would have the most success.

“I reached out to teachers to see what they think, and many have been supportive of the idea. They see its potential.”

She says no matter what the future holds, her experience in the New Venture Challenge reignited her passion for the program.

“It’s been a whirlwind. It’s one of the toughest things I’ve ever done, but it’s something I really want to do.

“Music brings people together and empowers us to overcome obstacles. It shouldn’t be a privilege. It’s a fundamental right.”

It was a busy fall for the American Music Research Center (AMRC)! One of the... END_OF_DOCUMENT_TOKEN_TO_BE_REPLACED

Friends, My heart is heavy. Associate Professor of Violin Charles (Chas) Wetherbee passed away on... END_OF_DOCUMENT_TOKEN_TO_BE_REPLACED

Longtime Associate Professor of Saxophone Tom Myer retired in May. As the year draws to a close, enjoy his insightful career reflections and advice … and discover what he’s up to now! END_OF_DOCUMENT_TOKEN_TO_BE_REPLACED
Return to the top of the page