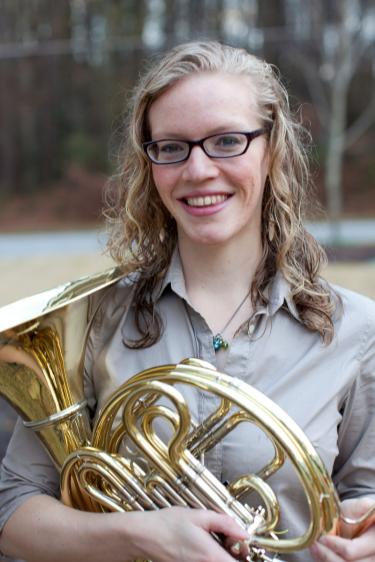 Katherine Smith listened to a message from the Wyoming Symphony Orchestra conductor early Wednesday afternoon. He asked her to call him right away. It was an emergency.

“Katherine, the press is all here,” Matthew Savery told her when she called back. At first the symphony's principal French horn player wondered if she was in trouble — for what, she couldn’t imagine.

Then he explained: World-renowned horn soloist Eric Ruske’s performances in Casper had just been canceled after allegations the music professor had sexually harassed two female students at Boston University. The conductor needed Smith to step up as soloist for the WSO’s season finale.

“Can I do this?” Smith thought for a moment. The concerts were set for Saturday night and Sunday afternoon.

“I know you can do this, and we need you to do it,” Savery told her.

Smith agreed to serve as soloist. Since then, there's been no time for self doubt.

Smith has since increased her practicing, as one might expect. But horn players have to take care not to overwork the lip muscles, she said. So she’s been studying and singing through parts as well.

“Because I know it, and I am at a point in my career where my physical/technical facility is fairly sound. … I just have to sing whatever I want to happen in my head and, really, my neurons in my brain will do the work for me,” Smith said.

She’d performed one of the pieces for the concert, "Villanelle" by Dukas before. She hadn’t performed Mozart’s "Horn Concerto No. 3," but as a professional horn player, she knows the piece. The Mozart number also required her to write a cadenza, or solo passage. The day Savery called, she transcribed an existing cadenza and added some flashy arpeggios and runs that show off the low ranges of the instrument, she said.

It would have been difficult to fly in an outside replacement on short notice, Savery said. But he didn't even think of that. Smith was the first person who came to mind, he said.

She'd impressed him during her principal horn audition last August and has wowed audiences since then, Savery said.

Smith is second principal horn of the Fort Collins Symphony and a graduate of Mannes College of Music in New York with a master’s degree from Northwestern University. She’s performed with dozens of chamber ensembles, including the award-winning resident wind quintet at the University of Colorado, 40th Parallel.

"I have full confidence that she'll be ready, and that she'll put on a phenomenal performance for the audience," Savery said. "They should be very proud to know their orchestra can attract that level of talent."

The reason Smith agreed readily is the rapport she has with Savery, along with the rest of the symphony musicians and organizers, she said.

“There is so much solidarity and support within the group,” she said. “We all work together, and we all have the same vision of as great of a performance as we can possibly have. It seems obvious, but I’ve been in situations where people just don’t care as much as these people do. ... Having all that behind me is really making this process so much easier than it would be in pretty much any other scenario.”

It will be interesting to perform the solos, change from her solo dress into concert black at intermission and immediately play principal horn in the "Ninth Symphony" of Dmitri Shostakovich to close the concert, she said.

Her pre-concert routine involves finding some quiet time alone to clear her mind, she said. She usually drinks some caffeinated tea about an hour and half before concerts, too. But the adrenaline will likely be running high enough she won’t need it this time, she said.

Meanwhile, she’s focusing on preparing for a what she's certain will be a successful concert.

“When that doubt creeps in when I'm playing, I go to the music,” Smith said. “I let it take me over and fill every corner of myself, so that the doubt has no room for existence and no place within that space. I don't have to count rests or think about the why or how, because it's already all there within the music.”

This story originally appeared in the Billings Gazette. View the original article.

Discovering and playing the music of composers who have been historically marginalized is a wonderful educational experience for all students, regardless of gender or ethnicity, says Professor of Piano Pedagogy Alejandro Cremaschi. END_OF_DOCUMENT_TOKEN_TO_BE_REPLACED

Assistant Professor of Composition and Pendulum New Music Director Annika Socolofsky discusses her recent incentive prize and how she perceives her role as a composer, performer and educator. END_OF_DOCUMENT_TOKEN_TO_BE_REPLACED
Return to the top of the page