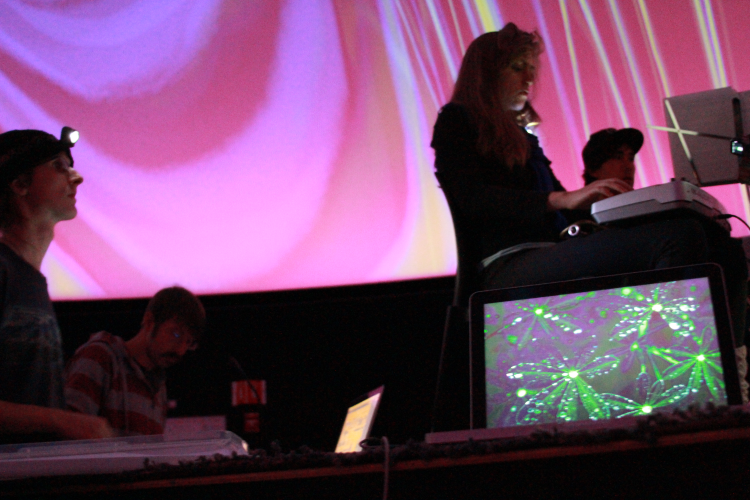 BLOrk will introduce original EDM compositions to the Black Box Theater at its March 5 concert.

The Boulder Laptop Orchestra—also known as BLOrk—continues to push the boundaries of typical music school repertoire. With a view to keeping students in a digital music age engaged, the ensemble’s March 5 concert will feature music inspired by electronic dance music, or EDM.

“I’ve been interested in doing a concert like this for a while,” says Thompson Jazz Studies and BLOrk co-director John Gunther. “When you’re putting classes together as a faculty member, you want to stay relevant. And electronic music is actually more interwoven with other current musical styles than you’d think.”

As a jazz musician, Gunther says he’s seen more collaboration among his jazz colleagues and electronic artists in the past few years. Indeed, the entire BLOrk concept is based on the idea that acoustic musicians—flutists, trombonists and the like—play side by side not only with electric guitarists but also with musicians plying their craft on the keyboard of a laptop.

EDM is perhaps just the next inevitable step for BLOrk. “We’ve dabbled in this before, and we’ve integrated a lot of sequencing and sounds using the same software that electronic artists use,” says Gunther. “As a class we’re studying the art form, surveying an array of artists and trying to get a sense for the history of the genre, then developing our own new material.”

The March 5 concert will explore some of the electronic music BLOrk students have created this semester. Composer Selena Wellington is working on a piece inspired by the Diablo Swing Orchestra. Wellington says her piece will be ideal for the dance-friendly Black Box Theater. “It’s a combination of metal and swing,” Wellington says. “I thought it would be perfect for BLOrk because it would bring a slightly different dance style to the concert.

“We also have a substantial horn section with great jazz players, so I know they can improvise off very little and still make it appealing.”

Another student composer, Aiden Cook, will be focusing on a more experimental style. “I was inspired by Mark Guiliana's 'Beat Music' project to create a program of found sound to exist alongside the rhythm section.”

The style is fairly new to Cook, but he says that’s how he prefers to work. “I have found that the less I know about a piece for BLOrk before I bring it into rehearsal, the better it turns out.”

“I'm excited to see how close we stay or how far we get from the concept of EDM in the concert,” says BLOrk member Masaki Kleinkopf. “We have a ton of freedom to improvise, experiment and create unique sounds and textures.”

After focusing this fall on the truly avant-garde music of Frank Zappa in BLOrk’s first-ever Fiske Planetarium show, the students say they’re looking forward to yet another chance to stretch their musical legs.

“I'm excited that BLOrk is doing EDM this semester because we get to take this popular genre of music and put our own BLOrk spin on it,” says Wellington.

Cook adds, “Working with this group is great because I know that no matter what I bring in, the result from the ensemble is going to be radical and experimental.”

And that’s the ultimate goal of this unique ensemble, Gunther says. “It’s all about students bringing in compositions, developing ideas together, collaborating and making a different style of music than they make anywhere else.”

BLOrk’s spring semester concert is Saturday, March 5 at 7:30 p.m. in the ATLAS Black Box Theater. It’s free and open to the public—and don’t forget to bring your dancing shoes!

Assistant Professor of Composition Annika Socolofsky blends the realms of art and science through the Instrument Design Lab (IDL). The course offers a science-based context to instrumentation, sound and musical creation, giving College of Music students a foundation in the science of music. END_OF_DOCUMENT_TOKEN_TO_BE_REPLACED

It was a busy fall for the American Music Research Center (AMRC)! One of the... END_OF_DOCUMENT_TOKEN_TO_BE_REPLACED

Friends, My heart is heavy. Associate Professor of Violin Charles (Chas) Wetherbee passed away on... END_OF_DOCUMENT_TOKEN_TO_BE_REPLACED
Return to the top of the page