The cultural truths told by music 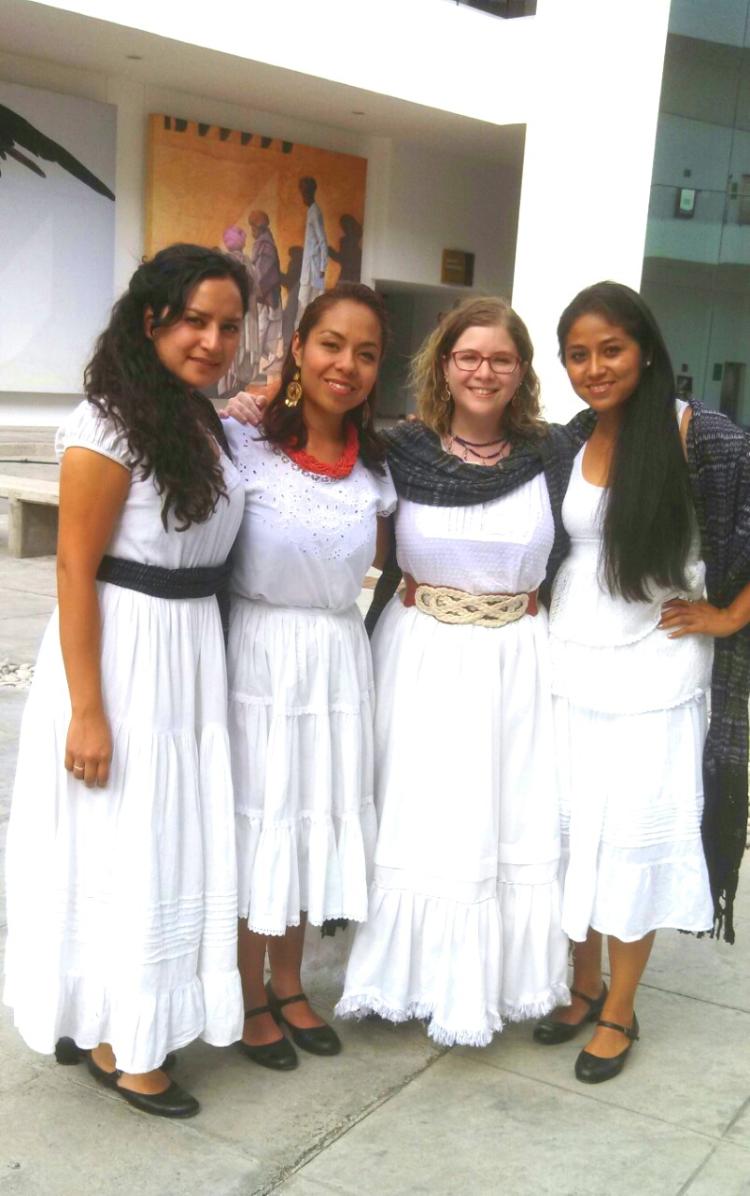 Teresita Lozano (second from right) before an orchestral performance in Mexico.

The world could benefit from a little cross-cultural understanding.

At a time when the Internet puts information—factual or false—at our fingertips wherever we are, words and pictures alone aren’t making people more empathetic: in many ways they’re being misused to drive a bigger wedge between cultures.

That’s where music can step in to tell the stories we should be hearing about different nations and their people, says ethnomusicology PhD candidate Teresita Lozano. “Music plays a role in bridging cultures. With everything that’s going on right now, it’s so important to consider what it’s like to walk in someone else’s shoes. With more awareness comes an environment of tolerance and acceptance.”

Lozano, who also teaches ethnomusicology for Continuing Education, uses the podium not just as a way to educate others on the role of music in defining history. She says music is playing a critical role in defining the future as well. “I have a responsibility to share with students the role music plays in our own society. People write music to depict their cultures in a more positive light than they’re often depicted in the media.”

Recent news regarding migrants and refugees hits home for Lozano, a first-generation Mexican-American. Growing up in El Paso, Texas, she has always lived a bicultural life. “You can see Juarez, Mexico, from my street in El Paso. We used to take a trolley to the market in Juarez all the time. There isn’t that kind of cultural tourism in that region anymore.”

Changes along the Mexico-United States border coincided with Lozano’s growing interest in her musical roots. Just before she began her music education and flute performance undergraduate studies at Baylor University, she lost her biggest personal connection to her heritage. “My grandmother passed away, and I realized there was so much I didn’t get to ask her about—especially music. During my junior year at Baylor, I decided to focus my musical studies on the role music plays in preserving traditions and telling the story of a culture, including my own.”

Now, though she still performs regularly, Lozano thinks of herself as a musically inclined Indiana Jones, focusing her research on anthropology and music. For her dissertation, she’s studying the reemergence of traditional Mexican folk song in the culture of immigrants in the United States. “Ballads written in the early 1920s during the Mexican Revolution are being put into new context,” she explains. “Migrants now, especially undocumented people, are transforming these songs into an expression of what it’s like to be so poor that you have to come to this country 'illegally.'

It’s a continuation of the cross-disciplinary work Lozano began in 2012, when she was a graduate fellow with the Latino Center at the Smithsonian. Along with another ethnomusicologist, she and a small group of artists, anthropologists and scientists researched the contributions of Latinos in U.S. culture. The hope is that their work will lead to a national museum of Latino heritage at the Smithsonian.

It was during her time in Washington that Lozano began to see the power of musical activism. “I interviewed musicians about the role of music during the Chicano Civil Rights Movement. They expressed their journey for equal rights through their music, which is an idea that’s still relevant in today’s world.”

That revelation, and all Lozano’s experiences with music and culture, came full circle when she recently gave a guest lecture in an undergraduate, non-major music appreciation class at the College of Music. The lecture—which Lozano has presented to colleagues at the Society for Ethnomusicology national conference—focused on music and activism.

“In class, we covered an array of musical activists, but I wanted to give the students something current to provide more context, so we talked about Syrian refugees and how they cope through music.”

Despite the polarizing political conversation revolving around refugees fleeing ISIS, Lozano says she was inspired by the students’ desire to learn more about the culture. “I had students come up to me after class and tell me they were thankful for my lecture, and had already looked up more information about the musicians, their music and their respective causes.”

Some students even offered to spread the word about these artists—doing their part to help. That, Lozano says, is why she takes her role as a musician seriously. “I wanted those students to realize that there are so many creative ways to make a difference in society. Using your voice to spread word of what’s happening, and asking for help, can be so powerful.

“My passion is—and always will be—to use my skills and experiences as a musician to make a difference.”

Discovering and playing the music of composers who have been historically marginalized is a wonderful educational experience for all students, regardless of gender or ethnicity, says Professor of Piano Pedagogy Alejandro Cremaschi. END_OF_DOCUMENT_TOKEN_TO_BE_REPLACED

Assistant Professor of Composition and Pendulum New Music Director Annika Socolofsky discusses her recent incentive prize and how she perceives her role as a composer, performer and educator. END_OF_DOCUMENT_TOKEN_TO_BE_REPLACED
Return to the top of the page