Want to be a musician? There’s an app for that. 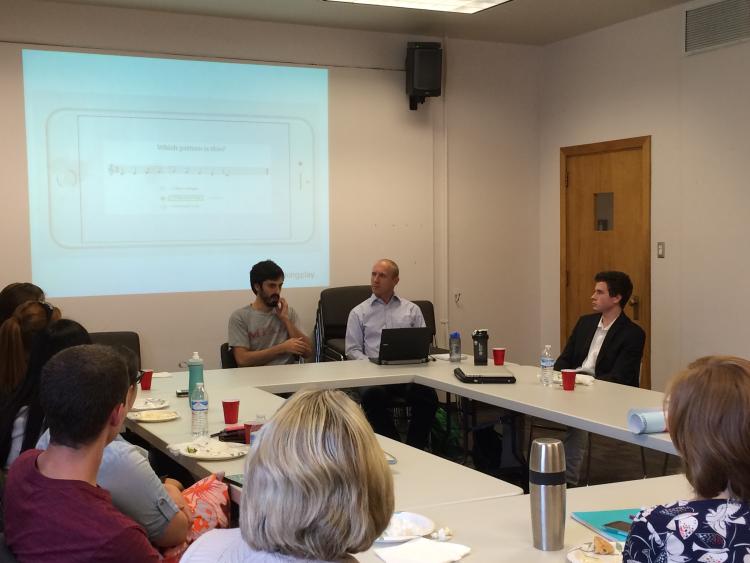 Matthew Pagano and Bryce Kirchhausen present their app, Mockingplay, at a music education colloquium in October.

A lot of people from different backgrounds see professional musicians and are inspired to pursue a music career themselves. But too often, when they begin to see the effort that goes into learning music, they get discouraged.

MBA students Bryce Kirchhausen and Matthew Pagano are hoping to change that. They’re taking the somewhat daunting idea of sitting down with a pile of sheet music and a shiny new instrument—trying to navigate a new and complicated world on your own—and turning it into something almost everyone is familiar with: an app.

“We’re breaking down the barrier that has intimidated people—myself included—and making it easier for them to pursue a dream of learning music,” says Kirchhausen. He’s not a musician himself, but says he might be with the help of a tool like Mockingplay.

His business partner, Pagano, is a musician. “I taught myself guitar, and it wasn’t until I had been playing for several months that I even felt comfortable enough to begin taking lessons. Mockingplay could bridge that gap,” he says.

Mockingplay is in its early stages, but the duo says it would put scales, rudimentary rhythm exercises and beginner pieces in one digital location. “As a kid, you’re busy learning the fundamentals, and you might have sheet music scattered all around your room. This organizes all those pieces into chunks, and quizzes you at different stages of the process,” says Pagano.

And just like a good music teacher, it will listen to your progress and give you feedback. According to Pagano, that’s critical. “You could be practicing incorrectly and never know it unless you talk to a teacher. This is a virtual instructor for when your teacher isn’t in the room.”

Mockingplay was partially inspired by Duolingo, a language learning app. “We thought, ‘Wouldn’t it be cool if there was something like this for music?’” says Pagano.

The idea was born in an entrepreneurship class through the MBA program at the Leeds School of Business. From there, Kirchhausen, Pagano and their team started pitching the app to local business owners and others. One of their pitches was at a music education colloquium at the College of Music in October.

“We emailed Margaret Berg and Jeff Nytch, because we wanted to talk to the people who would potentially use the app,” says Kirchhausen. “It was nice exposure and we got great feedback.”

He says the response was positive. “We got a lot of constructive critique on things we hadn’t thought of. We were initially marketing it toward music teachers, but with their feedback, we changed the aim to be toward students.”

The team is currently developing its business plan, and in the spring hopes to begin building out the product. “Right now, we’re digging into the technology. We’re working on incorporating ear training, so the app can show students the scale and and quiz them on whether it’s major or minor.

“Eventually, we’d like to have sequencing where you learn a scale, then you learn simple tunes and you end up playing a more complicated piece at the end of the lesson. Mockingplay can show you how those steps translate into performance,” says Pagano.

If you are interested in lending a hand with Mockingplay, email Matt Pagano.

Dean Robert Shay explains what the move to a temporary remote operating status from Sept. 23 through at least Oct. 7 means for the College of Music. END_OF_DOCUMENT_TOKEN_TO_BE_REPLACED

The Office of the Provost today announced four finalists in the search for the next dean of the College of Music. END_OF_DOCUMENT_TOKEN_TO_BE_REPLACED

The Entrepreneurship Center for Music is stepping up its work to promote student projects and businesses during the COVID-19 pandemic. END_OF_DOCUMENT_TOKEN_TO_BE_REPLACED
Return to the top of the page