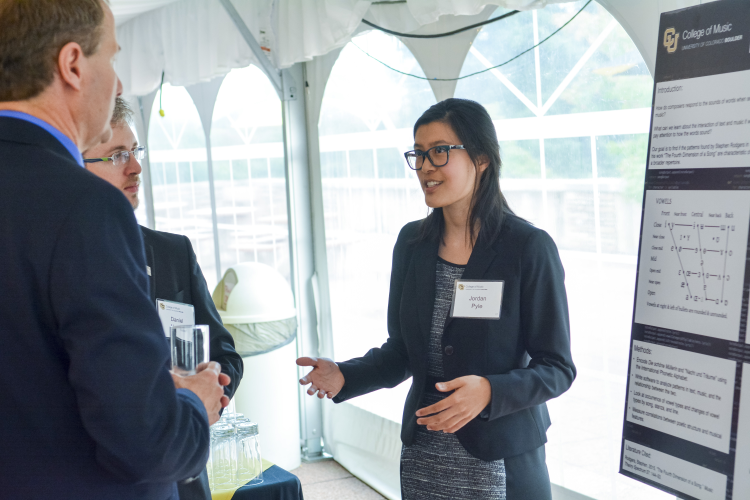 Jordan Pyle presents her group's findings on the music of Franz Schubert during the College of Music Scholarship Celebration and Dinner on Oct. 5.

The search for the “why” in a handful of Schubert Lieder is picking up steam for Jordan Pyle and Kris Shaffer. After a summer of encoding, translating and re-encoding, the project begun back in May with a music theorist in Oregon and a recent alum is making progress.

“Collaboration was tough over the summer because everyone had other obligations, but we ended up getting a lot done,” says Shaffer.

The music theory instructor and Pyle, a junior oboe performance major, are using a computer platform to encode and dissect Franz Schubert’s song set “Die schöne Müllerin.” Working with University of Oregon professor Stephen Rodgers and May ’15 music education graduate David Lonowski, they’re looking for patterns linking the phonetics of the poems to the rhythms, harmonies and key changes of the music.

What they uncovered this summer has been encouraging. “We found that there’s definitely something going on here,” says Shaffer. “But a couple of questions about the notes and rhythms need to be addressed.” The team was able to encode 20 songs, which amounted to around 100 of the most common words in the German language. Shaffer says the work done this summer will help ensure consistency in pronunciation as the work goes on.

As with any research project, some unexpected steps have come up already. “We realized we could build a German-to-IPA (International Phonetic Alphabet) dictionary,” says Pyle. “That wasn’t in the method at first, but doing those translations was slowing us down. So it was a lot of work but should help speed things up.”

Also unexpected was the addition of a new member of the team. Thanks to Shaffer’s dedicated blog and social media activity around the project, a music theory and cognitive science expert in Michigan got wind of their work. “Leigh VanHandel from Michigan State contacted me and said she already had 1,200 songs encoded, mostly the music but in some cases the German lyrics as well,” Shaffer explains. “She had the music for all the songs we had transcribed, so we cleaned up our code based on that.”

With their interdisciplinary team assembled, and communicating throughout the project via the instant messaging platform Slack, the next step for Shaffer and crew will be to start addressing some of those emerging questions. “One that’s come up,” he says, “is whether pronunciation has changed since Schubert’s time. We’re coding for how people would sing these songs now, but the way these words were pronounced when the poems were written affected the decisions Schubert made when he wrote the music, and pronunciation might be completely different today.” Once final details are ironed out in the code, Shaffer says they can really start digging into the data.

That’s the step Pyle is looking forward to most. “When I started this, I was in over my head,” she says. “Now that I’ve learned a bit of German and IPA and some of the coding, the process is becoming more exciting. “One of the most valuable lessons I’ve learned is how to self-publish your work. I had never thought about using blogging to promote what you’re doing. That interconnectivity was really cool to learn,” Pyle explains. Shaffer hopes the social aspect of the project will come in handy down the road. “It’s about making sure the right people hear about what you’re doing,” he says. “I wouldn’t have known that Leigh had all these songs encoded if she hadn’t seen our blog. Community engagement has been really helpful so far. As we start to need linguists or programmers, we’ll be able to tap into this network.”

Ultimately, they want their research to lead to a more well rounded understanding of song. “Modern studies focus less on the poetry of songs now,” says Shaffer. “I’m hoping that we can bring the sound of the poetry to the forefront again, just like we do with the music.” Follow along with the group’s research on the Leider Project website.

Curiosity drives Lydia Wagenknecht, a PhD candidate in ethnomusicology and recent recipient of a Fulbright Research Award. “I care that my research will help us understand something in a more broad-based way that we didn’t understand before,” she says. END_OF_DOCUMENT_TOKEN_TO_BE_REPLACED

We’re so excited to welcome alumnus Damani Phillips back to campus this week and to present him the College of Music’s 2022 Distinguished Alumnus Award at our commencement ceremony on May 5! “The versatile training provided by CU has been the cornerstone of my success to date, and has enabled me to do and be many things well beyond typical expectations,” he says. Meet Phillips and discover his powerful advice to graduating Music Buffs. END_OF_DOCUMENT_TOKEN_TO_BE_REPLACED

On May 5, we look forward to welcoming back Judith Glyde, formerly professor of cello and chamber music at the College of Music and chair of our string faculty. Since retiring in 2014 to live in New York City, the professor emerita she has been active with the college’s alumni community there, offering tremendous support to Forever Buffs who are now living and working in the city. END_OF_DOCUMENT_TOKEN_TO_BE_REPLACED
Return to the top of the page