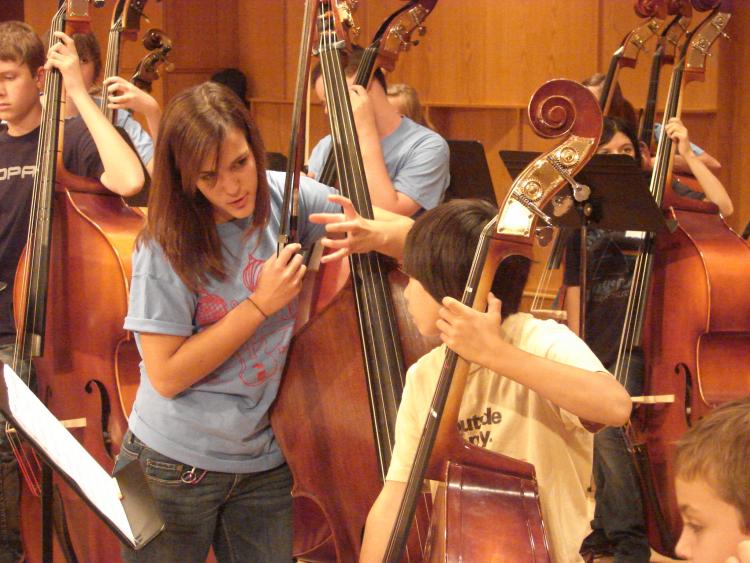 The 13th Rocky Mountain String Bass and Bass Guitar Festival is coming up Sunday, Sept. 27, at the College of Music.

Despite its size, the double bass is often overlooked in large ensembles due to its sometimes simple passages. Considered the foundation of a piece of music, the steady and rhythmic bass beat seldom finds itself in the spotlight. But the double bass plays so much more than a supporting role.

That’s why Professor of Double Bass Paul Erhard started the Rocky Mountain String Bass and Bass Guitar Festival. “Most young bass players are relegated to simple parts. They don’t get a lot of attention,” he says. “The festival is a chance for us to show these high school and middle school musicians how important what they do really is.”

Initially stretching over three days, the festival has convened 12 times since its founding in 1992. Its 13th iteration is coming up Sunday, Sept. 27, and will welcome bass students from around the region for a one-day workshop. Erhard says he hopes to help students reach a new level of excellence and excitement for their instrument. “I got the idea in 1989. I went to a bass festival in Hungary and it just opened my eyes. It was so powerful, even for me as an established musician, to be surrounded by that many bass players.”

Together with jazz bass instructor Bijoux Barbosa, Erhard will train students in the technical aspects of playing bass, lead sectional and ensemble practices, and give everyone a chance to play together in a “Monster Bass” ensemble.

“That’s a really great experience for these kids. For someone who’s in an orchestra with one or two other bass players … to play with 60 or more can make a big difference in how they view their role,” says Erhard.

Also lending a hand in instruction will be members of the CU-Boulder bass studio. Junior Amanda Johnson helped out at the last festival in 2012. “I’m really excited to work with younger kids in this setting,” says Johnson, a music education major. “It’s neat to have the opportunity to show them that the bass can make beautiful sounds, too. They don’t get that exposure in school.”

“The studio provides an immense amount of help,” says Erhard. “It’s given the early part of the year a new focus to have something to prepare for so soon.”

Another member of the studio, freshman Will Nelson, attended the bass festival as a high school student. “It showed me that while the music world is small, the bass world is even smaller,” says Nelson. “I met a lot of people who I would be playing with in all-state and other youth orchestras, and here at CU.”

The day will culminate with a public performance, featuring Erhard and Bijoux, the bass studio, the high school and middle school musicians, and this year’s special guest instructor, National Symphony bassist Ira Gold. “He’s one of the best. It’s exciting to have Ira here with us,” says Erhard.

Gold, who is also a bass professor at the Peabody Conservatory, will lead the bass studio in a master class the day before the festival. “I can’t wait to work with Ira and learn as much as I can from him,” says Johnson.

Erhard says the entire event is about inspiring young musicians. “They’ll be playing more challenging parts than they’ve ever played before, and that’s on purpose. We want them to walk away feeling good, and putting the things they learn into practice right away.”

Nelson said he wants to lead students to the same awakening he had as an attendee. “When I came here, I thought I already knew it all. Seeing what the bass could do beyond what I knew already was really inspiring.”

Curiosity drives Lydia Wagenknecht, a PhD candidate in ethnomusicology and recent recipient of a Fulbright Research Award. “I care that my research will help us understand something in a more broad-based way that we didn’t understand before,” she says. END_OF_DOCUMENT_TOKEN_TO_BE_REPLACED

We’re so excited to welcome alumnus Damani Phillips back to campus this week and to present him the College of Music’s 2022 Distinguished Alumnus Award at our commencement ceremony on May 5! “The versatile training provided by CU has been the cornerstone of my success to date, and has enabled me to do and be many things well beyond typical expectations,” he says. Meet Phillips and discover his powerful advice to graduating Music Buffs. END_OF_DOCUMENT_TOKEN_TO_BE_REPLACED

On May 5, we look forward to welcoming back Judith Glyde, formerly professor of cello and chamber music at the College of Music and chair of our string faculty. Since retiring in 2014 to live in New York City, the professor emerita she has been active with the college’s alumni community there, offering tremendous support to Forever Buffs who are now living and working in the city. END_OF_DOCUMENT_TOKEN_TO_BE_REPLACED
Return to the top of the page