A summer in Paris 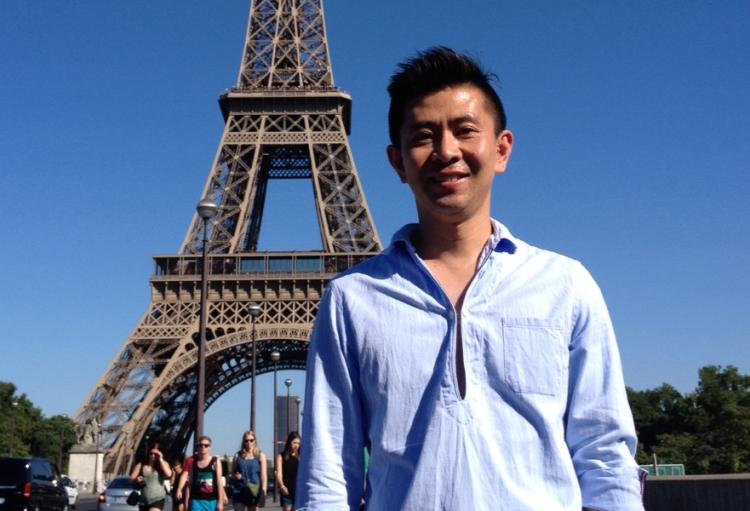 Toku Kawata, a third-year piano performance DMA student originally from Chiba, Japan, spent a month this summer in Paris. Though his official reason for being there was to research his dissertation project, an analysis of "En Vers" by Japanese composer and sometime Paris resident Akira Miyoshi, the trip was about so much more than research. Kawata shared his experience and photos with us.

This wasn’t exactly a study abroad experience. This was you, on your own, in a new country, researching an influential composer. How did you get this opportunity?

My trip to Paris came unexpectedly. I applied for a Mu Phi Epsilon grant, which offered a music student the opportunity to study in Paris. I didn’t think I would win, so I was more than thrilled when I received the grant. The generosity of this grant allowed me to be flexible in planning my trip, and I wanted very much to bring back what I discovered and learned in Paris back to the United States. Because this was my first time going to Europe, I wanted to stay there as long as I could.

So you didn’t have much time to plan for the trip. Did you at least know a little French for when you got there?

I practiced some basic French before I left, but I neither spoke French nor knew anyone in Paris who could help me. And I had a rough travel experience on the way there. When I arrived in Washington, for a layover, I couldn’t get out of the airplane because of a tornado. As a result, I didn’t make my connecting flight. The airline was able to get me on a flight to Frankfurt, Germany, then Charles de Gaulle … so I arrived at in Paris just four hours later than I was originally scheduled. But then my luggage arrived a day late, my cellphone didn’t work and, of course, I was experiencing a language barrier. Fortunately, soon after I arrived I met up with a friend from CU who was attending a month-long music theory course in Paris. We explored the city for two days, and I got acquainted with the metro system.

You were there to research Akira Miyoshi, who actually studied at the Conservatoire de Paris. How did you set about doing that once you got there?

I went to two main libraries: the library of the Conservatoire de Paris and the Bibliothèque nationale de France (BnF). Surprisingly, you can’t connect to the Internet on your laptop at the BnF, and it’s still using a paper cataloging system. So even though it’s the biggest library in the country, it wasn’t as advanced as you would think.

I was able to interview piano professor Karolos Zouganelis at the Conservatoire and a French pianist named Joséphine Ambroselli Brault about the piece I am working on. I was also able to meet with Japanese pianist Masumi Fukuya to talk about the Paris music scene, and cultural differences between Japan and France.

What did you do in your free time? The arts are all around in Paris …

Yes. I attended as many concerts as I could. The frequency of classical music performances shows how much this music is loved in Paris. Chopin, Liszt, Brahms and Schumann are prominent on these recitals and concerts. In addition, I went to see the opera “Alceste” by Glück at the Opera Garnier. I also visited important musical sites, such as Notre Dame cathedral, Père Lachaise Cemetery, Passy Cemetery, Chopin’s last apartment and Mont-Saint Michel. I visited Maurice Ravel’s House in Montfort l’Amaury, which was quite an adventure for me. The tour guide gave me special permission to play Ravel’s piano … I was speechless!

I visited museums, including the Musée du Louvre, d’Orsay, l’Orangerie, Picasso, de la Vie Romantique, Marmottan and Centre Georges Pompidou. Seeing paintings that I have only seen in art or music history textbooks was thrilling.

Other than insight into your dissertation, what will you take away from your first time in Europe?

One month is not long enough to see everything in Paris. I wish I could have stayed longer. I fell in love with this city. I discovered and listened to French music, saw countless art collections and felt the city’s age through its buildings. We can learn so much about a culture by living it rather than reading about it in a book. I am convinced that seeing is believing, and this experience has been invaluable to me.

I couldn’t be more grateful to Dr. Mutsumi Moteki, Mr. Michael Kirtley, Dr. Carlos Caballero and Dr. Andrew Cooperstock for introducing me to wonderful musicians while I was in Paris. I hope many people can have a chance to go abroad and experience a completely different lifestyle, and learn from what other countries, cultures and people have to offer.

To read more about Toku's experience and see photos of his trip, visit his website.

Discovering and playing the music of composers who have been historically marginalized is a wonderful educational experience for all students, regardless of gender or ethnicity, says Professor of Piano Pedagogy Alejandro Cremaschi. END_OF_DOCUMENT_TOKEN_TO_BE_REPLACED

Assistant Professor of Composition and Pendulum New Music Director Annika Socolofsky discusses her recent incentive prize and how she perceives her role as a composer, performer and educator. END_OF_DOCUMENT_TOKEN_TO_BE_REPLACED
Return to the top of the page