Reconnecting with the Renaissance 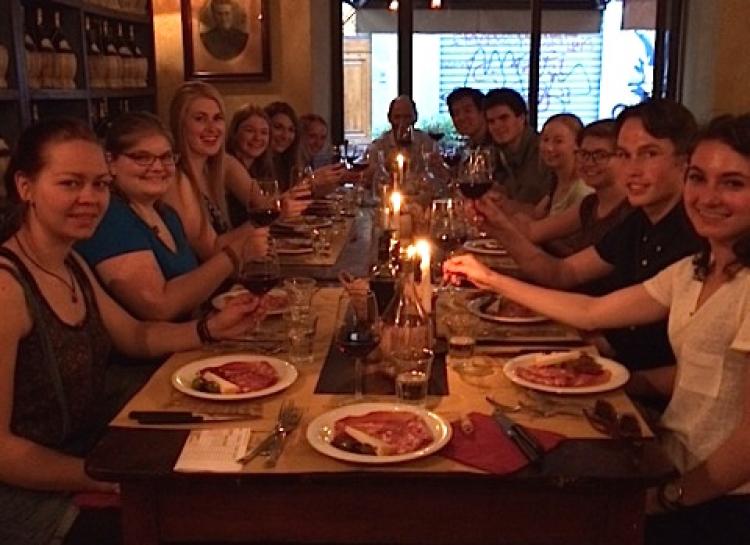 Nine College of Music students and four others from Boston, Vanderbilt and Drew universities, spent six weeks in Florence, Italy, as part of the “Music and Performing Arts – Renaissance in the XXI Century” study abroad program.

When you’re a student of the arts, there’s nothing like studying and performing in a city rich with culture. Surrounded by reminders of the rebirth of culture in a place like Florence, Italy, creatives through the centuries have been inspired to reach new heights in art, music and literature.

The abundance of Renaissance art in the buildings, streets and atmosphere of Florence make it an ideal setting for University of Colorado Boulder music students to do the same. The CU-Boulder study abroad program “Music and Performing Arts – Renaissance in the XXI Century” has brought a dozen or so College of Music students to the city for six weeks every spring. Founding and leading the program since its inception is Professor Emerita Judith Glyde.

“I feel very strongly that all students should have a study abroad experience,” she says.

Glyde, who moved to Italy after her retirement in May 2014, had been coming to the country since 1998 for trips and sabbaticals. “I came over to play in a chamber music festival down south,” she explains “The director of the festival, pianist Antonio Artese, became a good friend over the years.”

As the cello professor and Artese worked together more, they began to realize there was something missing from music in Europe: opportunities for young American musicians to study their art abroad. “There are very few great music programs in Europe. We wanted to give these music students the opportunity to study – and especially to perform – abroad,” Glyde says.

They came up with the idea for the CU-Boulder program; after a couple of years, it kicked off in 2012. Now in its fourth year, it’s overseen by the duo’s nonprofit, Florentia Consort.

The opportunity to play with – and learn from – established musicians in some of the world’s most well-known and historic venues is relished by the students who attended this year’s program. Harry Trump, a sophomore classical guitar student, says the experience was unforgettable. “It was such a valuable opportunity because of the city and the people I was surrounded by,” he says. “Florence is one of the most incredible cities I have ever been to, and I felt that by living there I was really immersed in its culture.”

That’s by design, Glyde says. “The very name of the program is meant to invoke a new Renaissance,” she says. “At a time when we need to re-think how we support the arts, it’s eye-opening for music students to be in the city where the Medicis – the most prolific arts patrons in European history – helped make the rebirth of the arts possible.”

Equally valuable, Trump says, was the time spent playing chamber music in the settings for which it was originally intended. “One of my favorite moments was playing a concert in a beautiful church in Alba,” he says. “Then we traveled to Cinque Terre on the coast, and spent a couple days camping and hiking along the Mediterranean Sea.” 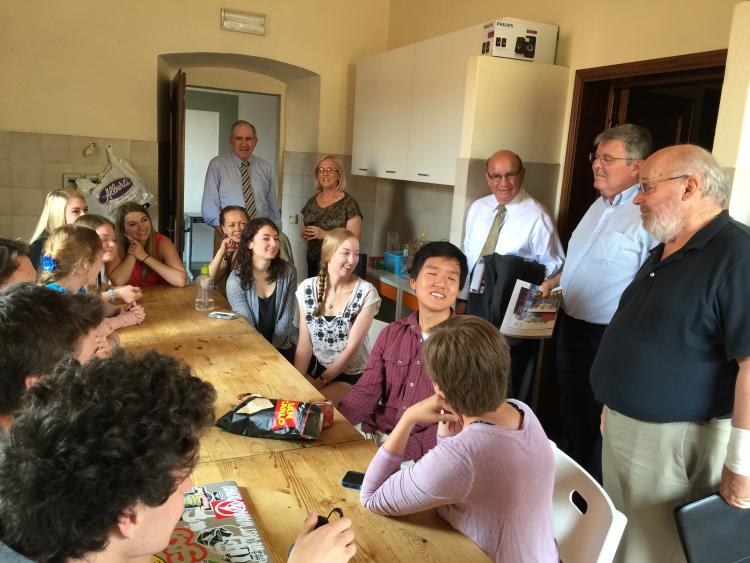 Chancellor Phil DiStefano visited students in their apartment during a Forever Buffs alumni event in Florence.

This spring, Glyde saw another opportunity in the program: she wanted to share the experience with CU-Boulder alumni. “It’s a beautiful place to bring our alumni together to reconnect with their alma mater,” she says.

Working together with Chancellor Phil DiStefano, Glyde organized a trip for nearly 50 Forever Buffs to visit Florence. In addition to welcoming the alumni into their temporary home, the study abroad students and Glyde spent a weekend showing off the city.

“Florence is such an interesting mix of culture and politics,” Glyde explains “You’re surrounded by art – it’s almost like you’re standing still in this time in history. The Renaissance is so visible and so eloquent.

“To be able to share the city with people who haven’t been here, or who’ve come to know it differently, is a thrill.”

College of Music Associate Dean for Undergraduate Studies James Austin accompanied the alumni on the trip. He says it was an opportunity to come full circle. "After years of effort devoted to increasing study abroad opportunities and participation for music majors, it was very rewarding to witness first-hand how our students benefitted musically and educationally from their experience in Florence.

"This program is an exemplar for our faculty to consider in developing Global Seminars and other approved programs in the future."

Alumni and benefactors of the Ritter Family Classical Guitar Program, Mikhy and Mike Ritter, also came along for the event.

“It was incredible because we lived in Florence for a year, so we feel like we have roots there,” says Mikhy. “To visit in this context was a combination of everything we love: Florence, concert music, the university...and great food.”

Students performed for the visiting alumni. “Hearing them play in the Duomo Auditorium was the highlight for us. It was the culmination of everything we were hearing about,” Ritter says. “We had pizza with them one night, so we had some insight into what they’d been doing."

That sense of family and collaboration is what Glyde hopes to share again in a possible alumni event next year.

“These students get to play together, eat together, travel together. It’s an incredible environment for them to grow,” she says.

“You should study abroad because you learn so much in such a short time,” says Trump. “Not just in terms of the subject you are studying, but also in terms of culture and social life in other countries. And you will probably make lifelong friendships.”

The “Music and Performing Arts – Renaissance in the XXI Century” study abroad program resumes May 16 through June 24, 2016. For information, email judith.glyde@colorado.edu, or visit florentiaconsort.org and Florentia Consort on Facebook.

Curiosity drives Lydia Wagenknecht, a PhD candidate in ethnomusicology and recent recipient of a Fulbright Research Award. “I care that my research will help us understand something in a more broad-based way that we didn’t understand before,” she says. END_OF_DOCUMENT_TOKEN_TO_BE_REPLACED

We’re so excited to welcome alumnus Damani Phillips back to campus this week and to present him the College of Music’s 2022 Distinguished Alumnus Award at our commencement ceremony on May 5! “The versatile training provided by CU has been the cornerstone of my success to date, and has enabled me to do and be many things well beyond typical expectations,” he says. Meet Phillips and discover his powerful advice to graduating Music Buffs. END_OF_DOCUMENT_TOKEN_TO_BE_REPLACED

On May 5, we look forward to welcoming back Judith Glyde, formerly professor of cello and chamber music at the College of Music and chair of our string faculty. Since retiring in 2014 to live in New York City, the professor emerita she has been active with the college’s alumni community there, offering tremendous support to Forever Buffs who are now living and working in the city. END_OF_DOCUMENT_TOKEN_TO_BE_REPLACED
Return to the top of the page