The harmony of phonetics 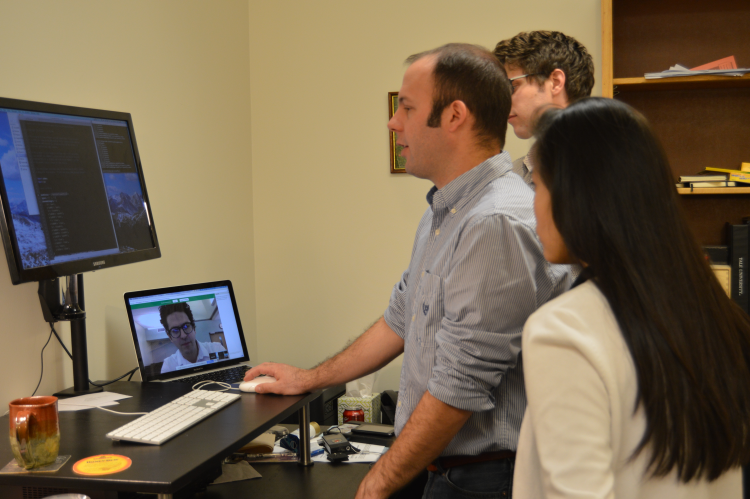 Kris Shaffer, David Lonowski and Jordan Pyle talk via Skype to Stephen Rodgers as they begin their summer-long analysis of the words and melodies of Schubert's Die schöne Müllerin.

When most of us hear a song for the first time, we aren’t necessarily listening to chord progressions, identifying the counter-melody or finding a correlation between key changes and the sound of the words used.

But with a few keystrokes, hundreds of lines of code and help from the phonetics library, CU-Boulder music theory instructor Kris Shaffer, a colleague in Oregon and two students will use computers to do just that.

It’s a melding of the romantic era and the digital era—music theory research at its best. “We’ll start with a 20-song set by Schubert, Die schöne Müllerin,” Shaffer explains. “From there, we’ll compare the phonetic data—changes in the kinds of sounds the poet is using—to the key changes and the chord changes and see if there’s a pattern.”

In other words, the research will show whether Schubert made his musical choices based on the words by poet Wilhelm Müller, who wrote Die schöne Müllerin.

So, where does the computer fit in?

For Shaffer, a traditional music theorist, the idea of the digital humanities didn’t become an interest until grad school. “It’s been popular for a while among literary scholars. But in music, there’s still only a small set of people using computational analysis,” he explains.

Shaffer embarks on this corpus-based study, dubbed The Lieder Project, with the help of another researcher he met several years ago, University of Oregon music theorist Stephen Rodgers.

“Stephen is a theorist and a singer, so he thinks about how his mouth and his vocal chords are moving as he’s singing, but he also thinks about the musical structure and how it’s changing at the same time,” Shaffer says.

A shared interest and a hunch that there might be a reason for the musical changes in Die schöne Müllerin led the two together. “Schubert is very artful in how he engages with the text, so we expect to see patterns,” says Shaffer. “We decided to collaborate, encode the songs based on harmonic and melodic structure and look at the phonetics of the poems line by line.”

The two students involved in the summer-long project—oboist Jordan Pyle and music education major David Lonowski—landed the gig in part thanks to an Undergraduate Research Opportunities Program (UROP) grant.

For Pyle, the project represents an exciting and fascinating crossroads of music, phonetics and poetry. “This interdisciplinary, multilayered work is what I look for—both academically and professionally,” she explains. “I strongly believe that the most rewarding and interesting discoveries happen at the intersections of disciplines.”

She says this is also a chance to improve as a musician. “It allows me to engage with the works in different ways that serve to enrich and nuance my performance interpretations.”

The process for inputting and analyzing the songs sounds more like software engineering than musical research. Shaffer says it starts with the poems the songs are based on.

“We encode each word using the International Phonetic Alphabet. Then we categorize the phonetics, and I build a program that creates tables from that data that we then analyze,” says Shaffer.

The table will show the probability of certain notes or chord progressions coinciding with certain phonetic sounds. “Then we can start to look for patterns and determine whether our hunch is just a coincidence,” Shaffer explains.

And it just may be. “We’re conditioned to pay attention to certain things when we listen to music. We might be so familiar with these songs that we think we’re hearing things. But computers aren’t,” Shaffer adds. “So the computer can either confirm our suspicion or prompt us to change course. If we see a pattern emerge in this first set, Jordan may turn this into a more in-depth research project.”

Even if the end result of the research is that this is all just a coincidence, Shaffer says there are still questions to be answered. “Then we can start to ask why. Why was the song written this way this time? What was the composer trying to convey?”

Pyle hopes this process is only the beginning of her involvement. “My main goals are to learn to conduct my own research using these methods and turn the project into an honors thesis,” she says. “I also want to present at the annual Special Undergraduate Enrichment Programs (SUEP) research conference, perhaps attend other conferences and work with Kris to get some works published on this topic.”

A New Understanding of Music

The project is just kicking off. To begin, Lonowski and Rodgers, who have a deep understanding of the phonetic alphabet, will encode the poems; Pyle will encode the music; and Shaffer will build the computer program. But because the insights come from the interaction of these different areas, the four will converse regularly and trade roles for different parts of the project.

Depending on how things go, the process of analyzing just the first 20 songs could take all summer. But even so, Shaffer stresses, there are still people who undertake these kinds of projects by hand.

“It’s manageable with a handful of songs. But if we were to do with pencil and paper what the computer is doing, it would take months,” he says.

Just as in music creation and recording, Shaffer says technology could be a game changer in the study of music theory. “The digital humanities offer a great opportunity to combine what computers do best—crunch numbers and perform basic tasks reliably and quickly—with what humanists do best—think creatively, critically, even skeptically, about what we perceive.

“When we combine those two perspectives, we can learn even more about art, language and culture than if we follow either one of them on its own.”

The team will be blogging and tweeting about the process throughout the summer. Follow along at The Lieder Project blog and by following Kris Shaffer’s twitter handle, @krisshaffer.

Curiosity drives Lydia Wagenknecht, a PhD candidate in ethnomusicology and recent recipient of a Fulbright Research Award. “I care that my research will help us understand something in a more broad-based way that we didn’t understand before,” she says. END_OF_DOCUMENT_TOKEN_TO_BE_REPLACED

We’re so excited to welcome alumnus Damani Phillips back to campus this week and to present him the College of Music’s 2022 Distinguished Alumnus Award at our commencement ceremony on May 5! “The versatile training provided by CU has been the cornerstone of my success to date, and has enabled me to do and be many things well beyond typical expectations,” he says. Meet Phillips and discover his powerful advice to graduating Music Buffs. END_OF_DOCUMENT_TOKEN_TO_BE_REPLACED

On May 5, we look forward to welcoming back Judith Glyde, formerly professor of cello and chamber music at the College of Music and chair of our string faculty. Since retiring in 2014 to live in New York City, the professor emerita she has been active with the college’s alumni community there, offering tremendous support to Forever Buffs who are now living and working in the city. END_OF_DOCUMENT_TOKEN_TO_BE_REPLACED
Return to the top of the page