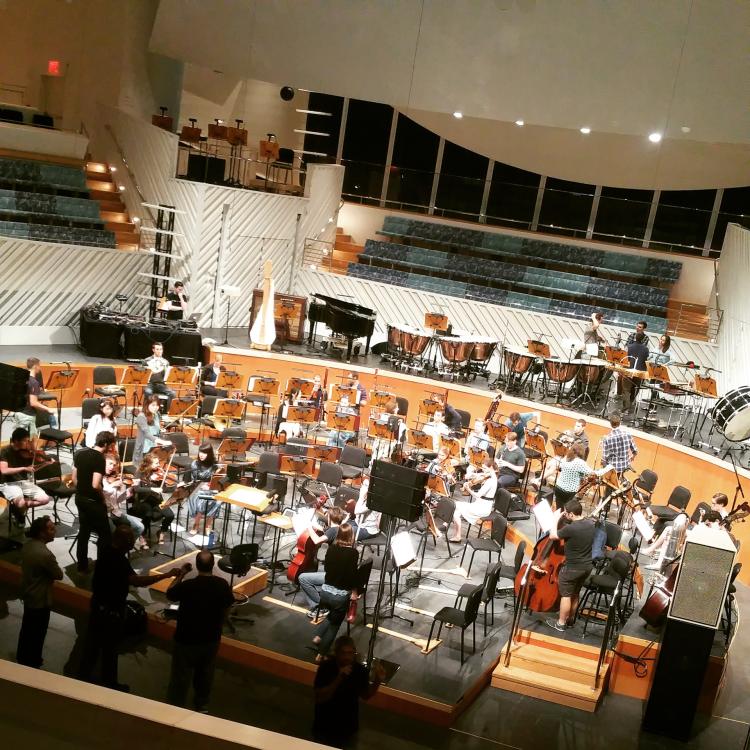 The New World Symphony performing a "club concert." An in-house DJ mixes and samples the music as club goers dance, drink and mill about nearby. Trombonist Mark Hsieh says it was "a whole new scene" for the orchestra. "I don't think I've ever involuntarily been part of so many Instagram and Snapchat photos!"

When you’re a master’s candidate, in your final semester, you don’t have a lot of time for yourself. Your days are spent writing, researching, neglecting to sleep. And when you’re working toward your master’s in music, a good chunk of your day is spent practicing.

That said, sometimes an opportunity presents itself that’s so good—an opportunity that will demand weeks of your precious time—that turning it down isn’t an option.

Trombone MM candidate Mark Hsieh—dressed in his finest on a Wednesday afternoon, just minutes removed from his oral exam—says he wouldn’t trade the month of March for anything.

“Even though now I’m behind in just about all my class work.”

A self-named “orchestral academy,” New World brings together recently graduated musicians (or in Mark’s case, grad students) for a crash course in the life of a professional; thrice weekly performances, seminars with visiting artists and a paycheck fill the term of up to a three-year contract.

When you’re a sub, it’s not that long of a commitment, but it’s just as intense. At one point on the trip Hsieh was on the road 15 hours in one day—he says he even had to practice at the airport.

“But it’s rejuvenating. It’s a great way to see how the professional world works and have a learning experience at the same time,” Hsieh says.

He knew that losing three crucial weeks of his academic career would be worth it; this was Hsieh’s second stint at the symphony. And he got this follow-up gig through a word-of-mouth recommendation—from a 6 year old.

“The first time I was here, this little boy came in to our rehearsal and wanted to play an instrument. No one wanted to lend him their horns, but I have nephews who play with mine all the time so I said sure,” Hsieh remembers.

“He loved it. He was so engaged. Then I was just on vacation in Miami, and I found out that his mom was so impressed that she talked to the directors of the program, and they invited me back.”

Among other benefits of the symphony, Hsieh says temporary positions like his open up all the time because New World understands its role in the lives of its musicians.

“They know people are always auditioning for full-time jobs, and they’re open to that.”

That makes it both a good jumping off point for more senior members, and a good foot in the door for new grads. Hsieh says for that reason, he’d go back in a heartbeat.

“I’ve played in a lot of mid-level orchestras, and this is the best experience I’ve ever had. I’d definitely recommend other students try out. Even just to get on the sub list.

“Anything you can do to help you become a better professional is worth it,” says Hsieh, as he loosens his collar and heads off to dive into more of that work he’s behind on.

Hsieh’s next steps after completing his master’s will be to apply for DMAs and audition for orchestra positions. That includes following his own advice, and attempting to earn a contract with the New World Symphony.

As we approach the final deadline to apply to the College of Music, student ambassador Isabel Goodwin has compiled a few of her favorite things about being a CU Boulder music student. END_OF_DOCUMENT_TOKEN_TO_BE_REPLACED

The fourth annual Distinguished Lectureship in Music, Diversity and Inclusion will feature a conversation with the Jazz at Lincoln Center Orchestra managing and artistic director. END_OF_DOCUMENT_TOKEN_TO_BE_REPLACED 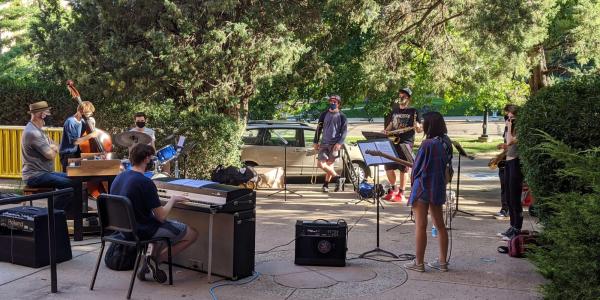 As we close out 2020, we celebrate just a few of the success stories that the College of Music community can remember about this year. END_OF_DOCUMENT_TOKEN_TO_BE_REPLACED
Return to the top of the page