A Splash of Beauty, William Thompson

Living internally is something we are all guilty of. Mood affects all of our interactions and sometimes it can seem impossible to break out of cyclical thought. “Reflection”, the piece featured here, is about precisely that--our struggle to view the world outside of ourselves. Viewing the world as it is (devoid of human perception) is difficult, but at times necessary. We can find comfort in knowing that the world will continue to exist outside of us, regardless of what is within.

This macro photograph is of an old, used, oil paint tube. This paint had not been used in months, so the textures and forms are the result of natural drying and an untidy artist. I enjoy making these photographs because of the sense of surprise evoked during the entire process. From the first moment a new photograph is pictured on the screen, to the imaginative ideas of the viewer, I delight in that moment of intrigue. I wanted to capture an image that changed the easily recognizable into something that implied an entirely different origin.

Aiming to confer both human and animal qualities to the piece, I blended a gazelle form with human shoulders, collarbones, and lips mirroring my own. The viewer is asked to make some first-glance judgments and then return to notice the human details, and then the expectation, the quiet anxiety, present in the wide eyes and cocked ear. This piece is a study in the view of oneself that can emerge by combining descriptions offered by others with self-examination. My piece also aims to capture the focus on physical attributes as well as the tendency for self-criticism women experience under the prevailing objectifying societal influences.

We all see ourselves different from how others see us. Moreover, our insecurities are often drawn out of this difference. This piece maps my self-perception. It attempts to bring together both the image of how others see me as well as how I see myself. Through bringing these differences into a single image, the piece exposes how different my self-perception is from reality. For many women, social pressures that push them to adopt unhealthy expectations for their bodies become internalized. They warp, distort, and misrepresent their self-perception. As I attempt to show with this piece this pressure can have a psychological impact: it can reform the way you see yourself.

This piece explores cultural difference; it reflects immigrant’s assimilation and how their physical mannerisms incorporate their migration. The piece attempts to draw the viewer into the life of a migrant. It attempts to make the viewer feel the difficulty of cultural assimilation through observing a pieced-together physical appearance. The piece brings together the subject’s Japanese culture with their American residence. It exposes how the assimilation process involves both holding onto one’s native culture as well as adopting new and foreign cultural characteristics.

This photo reminds me of the vitality of water. I liked how it looked isolated and desolate and made me think about the value of water. The few drops visible in the sink bowl make me think about the scarcity of water, especially clean water, for many less fortunate individuals.  I hope the viewer thinks about this and the incredible privilege the majority of people in Colorado have to turn on the faucet and have flowing clean water come out.

I walking around in downtown Denver and stopped in an empty alleyway to watch a stream of water flow into a street gutter.  The stream of water looked so deep, dark, and beautiful yet it ended in a pile of trash right before disappearing into the gutter. I took the photo at an angle so that the water runoff drains right in front of the viewer. I did this because I wanted to put the image of human pollution right before the viewer so that he or she would acknowledge it and realize that although the dirty water is disappearing out of sight, does not mean it ceases to exist.  It is easy to forget about the waste humans produce because it is often displaced elsewhere.

I lived in the country growing up, and it wasn’t unusual for us to burn our trash because of the poor local structure for handling trash. This particular photo was taken when my dad was burning the oil out of some barrels so that he could insert new linings and use the barrels to store feed for our pigs. I was constantly torn between thinking it was terrible to burn all of that oil into the air, and thinking it was a necessity of our lifestyle. This photo is about destruction – it’s about how easy it is for everything to go up in flames, and how beautiful it can be to watch it all burn. The image of sooty, dirty ashes marring the purity of freshly-fallen snow should remind us of how our own actions can forever darken the landscape that nature provides. 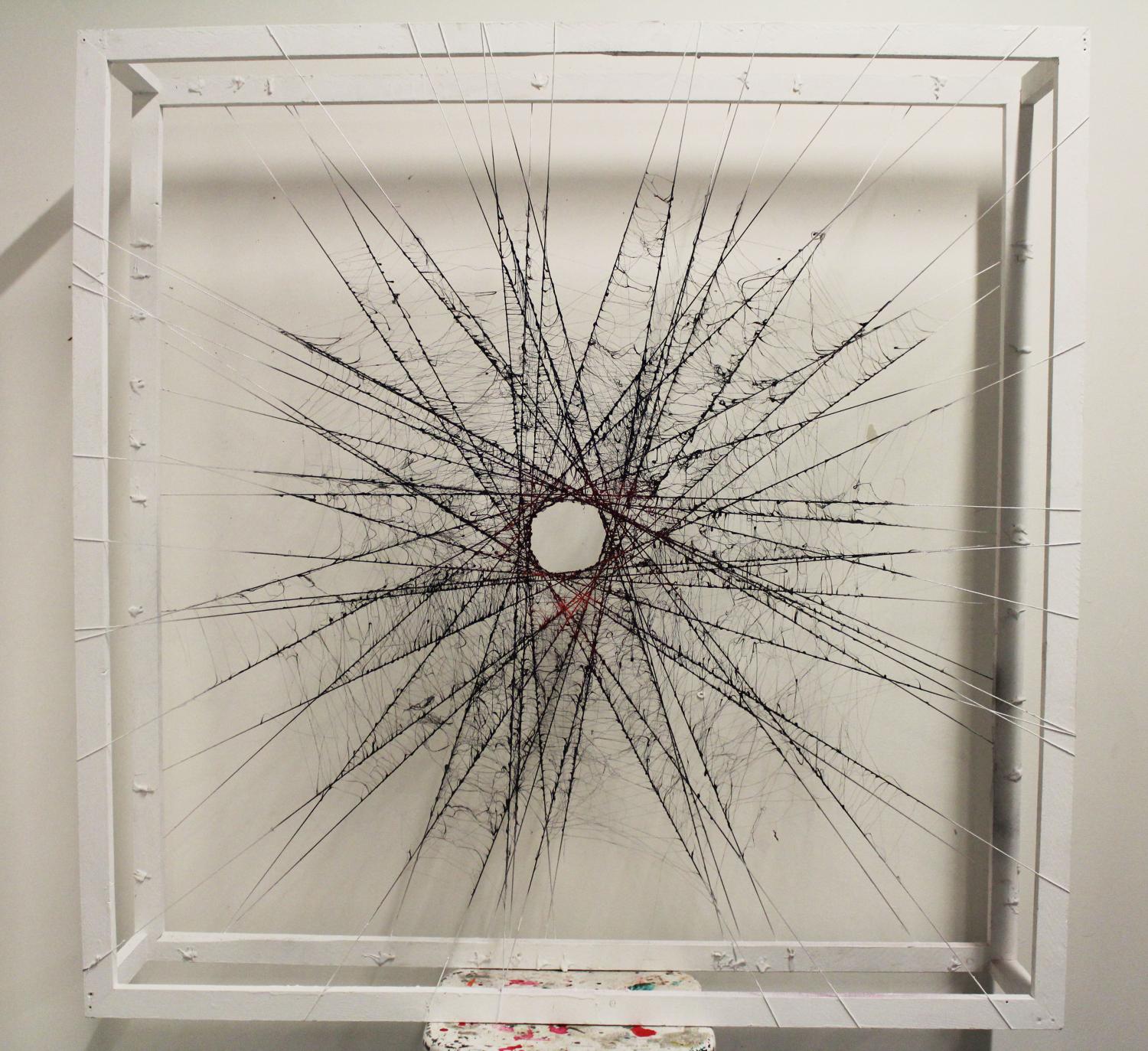 I used this piece to explore the act of creation and achieving depth through creation. In doing so I looked to achieve something that was beautiful. I was initially drawn to how paint naturally creates designs when it is left to mix with minimal manipulation. From there I began working with glue and string, trying to let the material as much as possible act in a way that is natural to it. Instead of trying to use a hot glue gun for the purpose of gluing something together I decided to enable it to do what it naturally does, which is create long string like tailings, and create a version of a web. The piece is a partial culmination of 7 months of work experimenting with paint and various mediums. It is a physical manifestation of a tangential flow of ideas, which while loosely connected, built off of each other over the time period of 7 months.

This piece is one of many from my series of ballpoint pen drawings. This process takes months to complete. This piece was designed with the sole purpose of giving the viewer an insight into the creative processes taking place within an artist’s mind. In this piece, I really want to entertain the viewer and take them on an artistic, thought provoking adventure.  Extraordinary, or “out of the ordinary” is the best way I can describe this piece.  It takes familiar subjects, happenings, and designs and puts them into a context that would otherwise never have been seen or thought of.

A Splash of Beauty, William Thompson

The way women are portrayed in the media today has really changed our perspectives of what ‘beauty’ is.  It is not natural for women to wear a pound of makeup and have plastic features.  This piece was intended to show the natural beauty of the female face alongside the natural beauty of water.  It shows that both are beautiful in their natural states.

A physicist, Richard Feynman, argued that a scientist could see more beauty in a flower than an artist because a scientist recognized how a flower was made, the molecular-cellular structure behind those petals. Here I look to show that the flowers and plants I have scanned can intertwine the often disparate studies of art and science. The viewer is presented a direct representation of something natural, that when looked at closely reveals its complexities, thus increasing appreciation for the environment. After losing my mom suddenly, my appreciation for the smallest aspects in nature grew tenfold. Collecting the flowers acts as a mode of preservation, much as photos of her do, and despite literal life being gone, they can still elicit amazing beauty and memory.

As an artist, I explore socially-neglected aspects of the human body. Through magnification, exaggeration, and unique mark-making available in printmaking, I hope to challenge the viewer to reconsider not only the "normal" human form, but also to reevaluate their own body in its idiosyncrasies.This print is a 3-layer aqua tint etching, with final line work etched into the plate and then printed using intaglio technique on BFK paper.

This photograph was taken with black and white film, developed in a traditional dark room. With the use of repetition, this idea of reused skin and leather is being toyed with. The cows in the background, the leather of the couch, the folds in the skin of the body, and the leather of all the boots all play the same role in depicting one material in various ways. They play off each other and all sit tightly together, in the same space, never previously knowing they would all meet like this. This piece addresses the skin and the skinned, all coming together in the different forms it has unwillingly become.

Moving Up Stairs is a part of my Boulder Flood project where I was trying to capture the devastation that followed the Colorado Flood last year (2013). In this photograph we can see my friend moving his belongings out of the flooding basement. I brought my camera and set it on the empty bed frame taking a long exposure of people moving in and out. This photograph implies both social and environmental issues. This piece is a reminder that people have the capability to deform nature to the point where the side effects of our actions can come back to haunt us.

For me, photography is an inherently personal endeavor, a way to quite literally share my view on the world with others. This image was taken inside my grandma’s house in New Jersey. I’m fascinated by her and her home, the way everything in it seems to be at least fifty years-old but works just as well as when it was new. Each room is like stepping into a museum curated by Wes Anderson. I wanted to preserve it. In large part, I was inspired by the work of one of my favorite photographers, William Eggleston. Essentially, he takes everyday scenes and composes beautiful images out of them. The results don’t seem particularly special at first glance, but each shot maintains a quiet complexity that holds the viewer.

This piece is about the strength of women. The Queen in the center has overcome difficulties to crown herself queen. She does not need physical strength to enforce her will, but can instead use her clothes to show her strength of personality. A large hoopskirt was built to support the dress. There was an underskirt of gold satin. The red dress over was created using existing patterns as well as those created specifically for the outfit. Palestrina knot embroidery with beads was used to create two rearing dragons on the bodice. A train with embroidered dragons and chiffon flames attaches at the back and is buttoned up to sit down. The red and gold relates to the dragon motif that is present throughout the dress and the rest of the collection.

This piece is about the gradual nature of life and death and the contrast between frailty and stability. Clay leaves were made from low-fire clay and then painted with acrylic paint.  Then, black wire was molded into the form of a dead tree and wrapped around a heavy rock. Silver wire, similar to the consistency of string, was wrapped around the branches.  The leaves and beads were attached to the branches with 7x fishing line going from green, closest to the branches, to red, farthest from the branches.  This piece was inspired by the changing of the seasons and the gradual nature of how life and death occurs.