Shedding light on a moving target 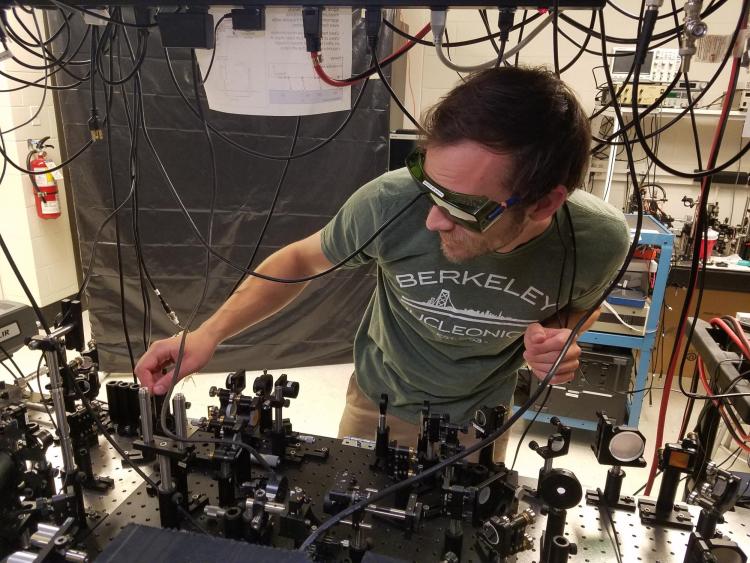 Sending a doughnut-shaped beam through optical fiber may hold the key to better brain imaging.

When physics PhD student Brendan Heffernan began working with Juliet Gopinath, associate professor of electrical, computer and energy engineering and physics, he was intrigued by something a previous PhD student in her lab had observed.

Robert Niederriter (MPhys’13, PhD ’16) observed that two laser beams launched into an optical fiber at slightly different times could produce a doughnut-shaped output that does not change as the fiber is moved around.

Niederriter and colleagues postulated that the fiber could be used for stimulated emission depletion microscopy, a technique that won the Nobel Prize for chemistry in 2014. In STED, a doughnut-shaped beam provides a clever way around the resolution limit set by the diffraction of light, which hampers other microscopy techniques.

It’s taken a few years, but Heffernan has demonstrated that Niederriter’s beam can be used to create a miniature STED microscope capable of studying brain activity in freely behaving animals. The team’s proof of concept was published today in the Nature Research journal Scientific Reports.

To image the brain of a freely behaving animal – rather than one that is anesthetized or restrained – you need a beam that doesn’t change shape when the optical fiber carrying it moves and bends. Heffernan has successfully identified the combination of light modes and optical components to accomplish that. And he did it all with commercially available parts, which means the microscope will be much cheaper to build than competing technology.

Work for the Scientific Reports paper was performed in collaboration with Stephanie Meyer, senior research associate at CU Anschutz, who has built custom STED microscopes.

Neiderriter developed the idea of using his beam in STED with CU Anschutz professors Emily Gibson and Diego Restrepo, who had developed a benchtop superresolution microscope, as well as University of Denver Professor Mark Siemens.

Gopinath and Gibson will serve as principal investigators on the NSF grant, with Restrepo and Siemens serving as co-PIs.

Bypassing the diffraction limit would allow researchers to look at very tiny objects, like the dendritic spines on neurons. Scientists know that changes in the spines are tied to learning and memory, but they’re not sure exactly how or why.

“We can’t tell how these dynamic changes in shape affect memory because they’re blurred out,” Heffernan said. “If we can resolve the changes and watch them in mice as they’re learning and behaving, we’d learn more about how they work.”

The team has also received a National Science Foundation grant that will allow them to build a miniature version of the STED microscope. Their vision is for two instruments housed at the CU Boulder Light Microscopy Core Facility and the CU Anschutz Advanced Light Microscopy Facility, where the wider research community could use them to study changes in minute neuronal structures in awake animals during their everyday behaviors, like learning and social interactions.

Zoe Donaldson is one of several researchers who has expressed interest in the technology. Her recent research involves monogamous prairie voles – specifically, the grief they experience when they lose their mate.

"Grief changes the brain,” she said. “With this new scope, we will be able to chart these changes with an unprecedented level – asking how brain cells form or lose connections as an animal recovers from the loss of their partner."