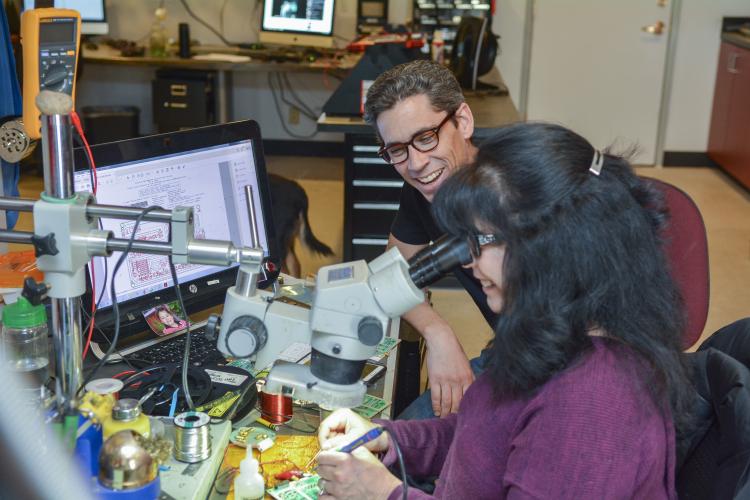 At Boulder-based Holzworth Instrumentation, which builds high-performance RF synthesizers and phase noise analysis products, the impact of the University of Colorado is everywhere. Not only are five of their nine employees CU-Boulder or CU-Denver alumni, but their co-founder’s experiences at CU-Boulder have shaped the way the company does business.

Jason Breitbarth (MS PhDElEngr’06) started Holzworth out of his garage in 2004 while he was still a graduate student, which meant the company had to operate on a shoestring budget. He and his partners maxed out credit cards, rented test equipment and learned to manufacture less expensively than their competitors.

It was in the development of that manufacturing process that his experience as a PhD student in Distinguished Professor Zoya Popovic’s lab came in handy.

“In Zoya’s lab, we had to build a lot of our own stuff and solve problems in the physical world,” he said, adding that that was part of the reason he chose to study with her. “I wanted to make stuff and build stuff.”

More than 10 years later, the company still operates much the same way. They design their own printed circuit boards, which are then produced by another Boulder company. Their products are then manufactured by two technicians in their office space near the Dushanbe Teahouse. Breitbarth said they also prefer to build and test circuits rather than run simulations – another throwback to life in Popovic’s lab.

“She was always telling us to stop simulating things and go build something,” he said.

The focus on hands-on, practical learning at CU also brings him back to the university when he looks to hire new employees. Engineer David Glennon is a mechanical engineering graduate from CU-Boulder, while Josh Perry and Ryan Smith are alumni of CU-Denver’s engineering program. Office manager Kim Heller, a Leeds Business School graduate, designed their inventory management system from scratch.

Before he returned to CU-Boulder for his PhD, Breitbarth had realized that his inclination to tinker and try new things made it hard for him to work at big companies. During a stint at Hewlett Packard, he remembers asking a senior engineer if they had ever tried a different method for a project they were working on.

“He said, ‘I tried it once in 1976 and it didn’t work, so I’m not going to do it again and you’re not either,’” Breitbarth said. “HP was amazing on an educational level, but from a political level, it was totally different.”

Breitbarth also has another hallmark of a true entrepreneur – a high tolerance for risk. Despite having no money and a new baby at home during the early days of Holzworth, he never questioned his decision to start the company.

“It seemed extremely reasonable at the time and not risky at all,” he said. “I think that’s the difference of whether you should go for it or not in starting your own business. Does it seem reasonable to you, even if it doesn’t for other people?”

Today, that risk tolerance is paying off at Holzworth. The company is launching two new products this year, moving into a bigger office space and adding three or four new employees.