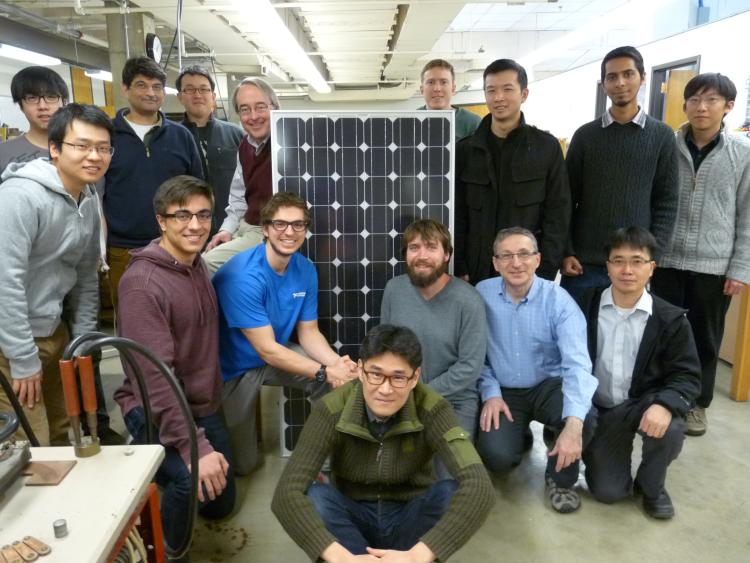 ECEE Assistant Professor Khurram Afridi and his team were notified by Google in December 2014 that they had received a grant to compete in the Little Box Challenge, a million-dollar prize competition funded by Google and judged by the IEEE Power Electronics Society.

The contest's goal is to dramatically change the technology of solar power inverters, and it has attracted significant attention, with 10 teams from around the world selected to receive the grant from Google.

Now, Prof. Afridi and his team has less than a year to build a power inverter that is at least 10 times smaller than the current picnic cooler-sized inverters commonly used in photovoltaic solar power systems and other green energy applications.

The 2-kVA inverter, which must fit within a 40 in3 rectangular metal enclosure, is also required to have efficiency greater than 95%, an enclosing case temperature of under 60°C without external cooling, and must conform to a number of other requirements and standards.

But Afridi isn't daunted. In fact, he says it was the demanding timeline and project requirements that piqued the team's interest in competing.

"It was aggressive enough in terms of requirements that it made for a good challenge," he said. "The power density challenge is quite aggressive, especially when you add to it other requirements like thermal management and electromagnetic interference and the fact that you're discouraged from using limited life, but high energy density, electrolytic capacitors."

Afridi also saw the challenge as a good opportunity for collaboration across disciplines. His Team Flatiron will include ECEE researchers Professor Bob Erickson, Professor Dragan Maksimovic and Dr. Dan Seltzer, as well as Associate Professor Ronggui Yang from mechanical engineering, and a number of graduate students.

While they obviously can't give away much about their approach, Afridi said they're going to use a unique energy-buffering scheme and innovative inverter topology, which should allow them to exceed the required specifications.

Because of the tight timeline, the team won't have much time for iterations. Instead, Afridi said, they will have to run all pieces of the project in parallel, which will require close collaboration.

"It basically has to be running well on the first try," he said.

In the coming July, the Team Flatiron will submit their technical approach and their little box to the judges. Eighteen finalists will then be selected to test their inverters in October at the National Renewable Energy Laboratory (NREL) in Golden, Colorado.

Because the grant from Google will only cover equipment and parts, the team will be looking for volunteer undergraduate researchers to join them in the lab. If you are interested, contact Prof. Afridi atkhurram.afridi@colorado.edu.