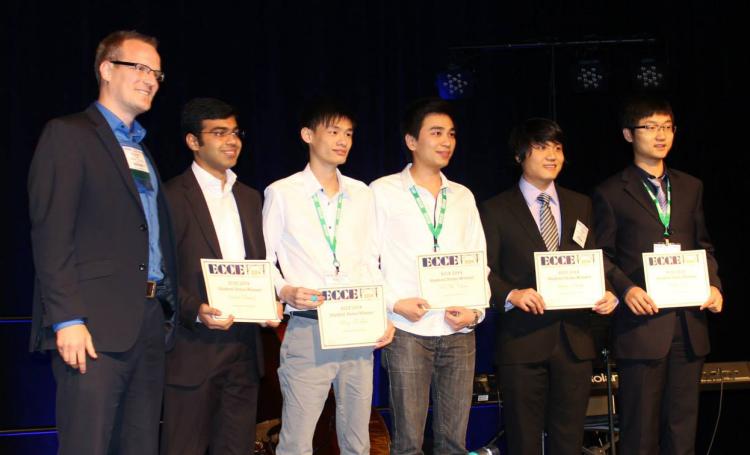 First-year PhD student Saad Pervaiz recently beat out nine students from around the world to take home the Best Demo Award at the Institute of Electrical and Electronics Engineers' 2014 Energy Conversion Congress and Expo (ECCE) in Pittsburgh.

ECCE introduced the student hardware demo event in 2011 for students to showcase their research outcomes and interact with academia and industry. This year, teams from Virginia Tech, Iowa State, North Carolina State, City University of Hong Kong and KTH Sweden were among those to present their posters, hardware and videos at the event.

Pervaiz demonstrated an electrolytic-free offline led driver with a ceramic-capacitor-based compact stacked switched capacitor (SSC) energy buffer, a project he has been working on with Assistant Professor Khurram Afridi. He was supported by Yu Ni, a recent graduate of the ECEE master's program, and Minjie Chen, a student Afridi is co-advising at the Massachusetts Institute of Technology.

LED drivers are used in commercial and residential lighting to regulate power to an LED or string of LEDs.

"Most LEDs are guaranteed for 40 years, but the drivers only last four or five years before they need to be replaced," Pervaiz said. "We're creating a driver that will last longer."

During their demonstration, Pervaiz and his team pitted their driver against one with electrolytic capacitors. They showed that theirs achieved the same performance as the electrolytic version, while reducing the passive volume by a factor of two.

In addition to winning a cash award, Pervaiz said the conference was also a great networking opportunity.

"During my presentation, I got to meet some of the top researches of my field," he said. "I also made some good industry connections"

Learn more about Pervaiz's project in his demonstration report.