Ukraine and war in Eastern Europe 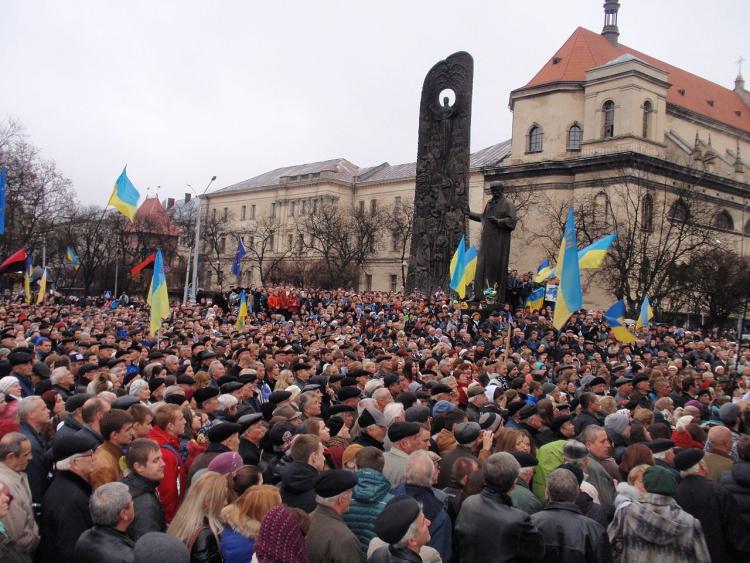 Protestors in the Ukrainian city of Lviv during the Maidan protests of 2014. (Credit: CC Photo via Wikimedia Commons)

This week, tensions in Eastern Europe broke into full-scale war as Russia launched air and land attacks against the sovereign nation of Ukraine. CU Boulder experts are available to discuss various topics related to the war in Ukraine, including the history of conflict, political diplomacy and economic impacts of the war on the United States.

A virtual roundtable focused on war and conflict in Ukraine will take place Monday, Feb. 28 at 7 p.m. MST. Experts will offer insights into the history of Ukraine and Russia, domestic politics and society of the region, sentiments on the ground in Ukraine and sanctions by the West. Media are invited to attend.

On Ukrainian conflict, history and diplomacy

John O’Loughlin, professor of geography, has worked in Ukraine since the collapse of the Soviet Union in the early 1990s and conducts surveys of the political beliefs of everyday Ukrainians. He is available to discuss his team’s survey results and the history of conflict in the region. Learn more about his work:

Sarah Wilson Sokhey, associate professor of political science, studies domestic politics and economic policymaking in many former Soviet Union nations. She can discuss the general political situation in Ukraine and how socioeconomic conditions drive political dynamics in the region.

Erin Hutchinson, professor of history, studies the cultural and political history of the Soviet Union, with a particular focus on the topics of nationality and empire. She can discuss Ukrainian and Russian relations through time.

Thomas Zeiler, professor of history and director of the International Affairs Program, can discuss U.S. and economic diplomacy, including how sanctions might affect the United States. He can also discuss the history of diplomacy, the Cold War and American political history.

Laura DeLuca, an anthropologist and assistant teaching professor, teaches a course on anthropology of war and refugees. She can discuss the human dimension of the crisis in Ukraine, including the challenges refugees and internally displaced people in Ukraine face.

David Bearce, professor of political science, can discuss the role of sanctions in international conflicts, including why nations choose to levy sanctions and the potential impacts of these actions.

Sanjai Bhagat, professor of finance at the Leeds School of Business, can share insight on the impact of the conflict in Ukraine on business uncertainty, corporate investment and employment. He can also discuss impacts on energy and stock prices in the U.S. and abroad.

Iain Boyd, director of the Center for National Security Initiatives, is an aerospace engineer who specializes in vehicles that fly much faster than the speed of sound. He can speak about the national security implications of the war in Ukraine, including nuclear weapons and the threat of cyberattacks.

Brian Toon, research scientist at the Laboratory for Atmospheric and Space Physics (LASP), has spent several decades studying the environmental and human impacts of nuclear warfare. He can discuss the increasingly tense situation surrounding nuclelar arsenals in Russia and beyond.