This past weekend, experts and activists from around the world shared knowledge and stories about the devastating impacts of climate change on fundamental human rights, the obligations governments, corporations and individuals have to address the crisis, and solutions needed for a sustainable future.

After three days of dynamic and thought-provoking panels and keynotes at the inaugural Right Here, Right Now Global Climate Summit co-hosted by United Nations Human Rights and CU Boulder, the work now begins on moving the talk about the human rights crisis that climate change is to action.

Inspired by the Universal Declaration of Human Rights and other human rights instruments, the first draft of the commitments will be an outcome of the just-concluded summit at CU Boulder for which 4,300 people representing 99 countries registered to attend in-person and virtually. Organizers are aiming to provide an update on the commitments in April and unveil them at COP28 in Dubai.

“That is the sentiment I feel, and it is pretty prevalent among those who were panelists and keynote speakers and many in the audience: a renewed sense of resolve, as well as hope.”

Anaya said the post-summit commitments will play a key role as an aspirational and prescriptive living document, including specific commitments that governments, corporations and educational institutions will be urged to make to prevent and minimize the harmful effects of climate change. The commitments will be periodically reviewed and updated to reflect the highest human rights standards and latest science.

In her closing remarks, Human Rights Officer Therese Arnesen, of the UN Human Rights Office, said: “We need to unite. We need to stand together to continue promoting human rights-based climate action. That’s what this summit is about. This is what the Human Rights Climate Commitments coming out of the summit is about, and I hope you will take with you some of the inspiration, despair and anger and excitement that I, at least, felt during the last three days.”

In multiple sessions, panelists pointed out that it has been women, Indigenous people and activists from developing countries or the Global South who have pushed forth some of the most critical advancements in fighting climate change. That includes the Paris Agreement goal to limit global warming to, preferably 1.5 degrees above pre-industrial levels, and the recent establishment at COP 27 of a “loss and damage” fund for nations most vulnerable to the climate crisis.

Former President of Ireland Mary Robinson called for a new women-led global climate justice movement, a feminine version of the male-led “moonshot” of the 1960s to hold the duty-bearers, including government and industry, to task for protecting the planet. “They said putting a man on the moon was impossible but it was achieved in eight years.”

Volker Türk, UN High Commissioner for Human Rights, made a video appearance: “Human rights are our compass guiding the decisions that need to be made around climate change. This alliance represents the power of change that we can do things differently. That one of the best parts of what makes us human is that we are endlessly creative.”

Colorado Gov. Jared Polis kicked off the summit with a stark reminder that no corner of the globe is immune to the impacts of a rapidly warming planet. Less than one year ago, Boulder County suffered the most destructive fire in the history of the state, a rare wintertime blaze that burned more than 1,000 homes. “There’s no denying that climate change is also a humanitarian crisis.”

Sheila Watt-Cloutier, global advocate for indigenous rights and health and a leader focused on the impact of climate change on human rights, said: “Indigenous wisdom is the medicine the world seeks to attain sustainability, and we’ve got to start to tap into that wisdom. We can show the world about sustainability because we still rely on our environment, our lands, our water to sustain our way of life.”

Kumi Naidoo, South African-born human rights and climate activist, former international executive director of Greenpeace International and secretary general of Amnesty International, said: “We are at a moment in history when all of us must now take on a mantle of leadership. And we must do it in a way that energizes and motivates rather than saying ‘It’s too late. What’s the point of resistance?’”

Youth activist and poet Selina Leem, from the Marshall Islands, spoke of  growing up in a place just 2 meters above sea level where global warming could literally mean the submergence of her homeland. “We are not accepting of the idea of permanently relocating from our country. It is where it is and that is where we deserve  to be.”

Several panelists suggested that for industry to be able to fully respond to the climate change crisis, the global economy, including investors, must rethink the “Milton Friedman mindset” that success is inextricably tied to short-term profit. “The actions we need to take may not be profitable in a narrow sense in the short-term, but if we don’t take those actions, human civilization itself is threatened,” said Gillian Marcelle, CEO and founder of Resilience Capital Ventures, LLC.

Kera Sherwood-O'Regan (Kāi Tahu), Indigenous and disabled climate justice expert and community advocate from Te Waipounamu, the South Island of New Zealand, said: “Loss and damage getting across the line at COP27 is absolutely massive. It is critical that we give credit where it is due. They have not been given space by developed nations, it has happened because people have banged down the doors of those negotiation rooms.”

Hilda Flavia Nakabuye, youth activist, Uganda, said: “This is the time in history where humanity has to understand that we own the power that will change the world. For so long we have been looking to political will to make change and where has that gotten us? We have to stand up and hold each other’s hands and create the difference we so badly need.”

Vivien Luk, executive director at WORK, an organization with a mission to accompany families in Haiti out of poverty through good, dignified work, said: “I find hope in the number of tools, the expansion of tools and resources and strategies that we have in addressing climate change today. Even just with the 4,000 people who have signed up to be a part of this conference. It's incredible. It's an incredible force of hope and power. And also that the inclusion of human rights into this discussion, more and more of that is happening.”

Naderev ‘Yeb’ Sano, executive director of Greenpeace Southeast Asia, stressed that economics and law aside, human empathy will be key to achieving real progress: “Litigation can only go so far. The battle will be won or lost in the chambers of people’s hearts.”

Elizabeth Robinson, director of the Grantham Research Institute: “For children born today, their whole health outcomes are going to be defined by the extent to which we tackle climate change. If we allow emissions to continue as they are, we’re denying our children basic rights.”

Access to recordings of summit panels and programs will be shared on the Right Here, Right Now Global Climate Summit website when they are available. In the interim, find out how to access video recordings via Attendee Hub.

Full Coverage from the Summit 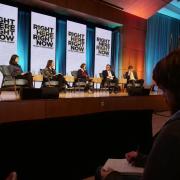 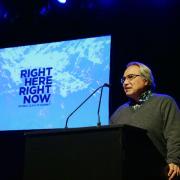 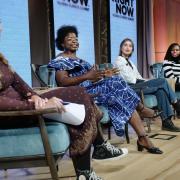 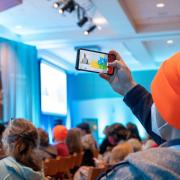 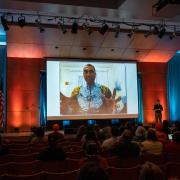 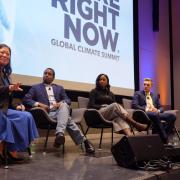 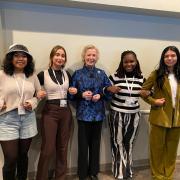 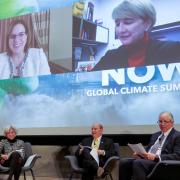 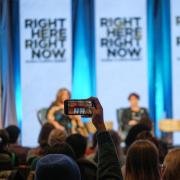 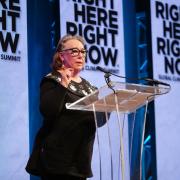 Community, tribal and K-12 groups are invited to submit project proposals that explore impacts of oil and gas development on their local communities with support from the AirWaterGas Sustainability Research Network based at the University of Colorado Boulder. The grants of up to $5,000 each aim to improve understanding of the risks and benefits of oil and gas development as identified by community organizations. Grant recipients will work with AirWaterGas researchers for the duration of their one-year projects. END_OF_DOCUMENT_TOKEN_TO_BE_REPLACED 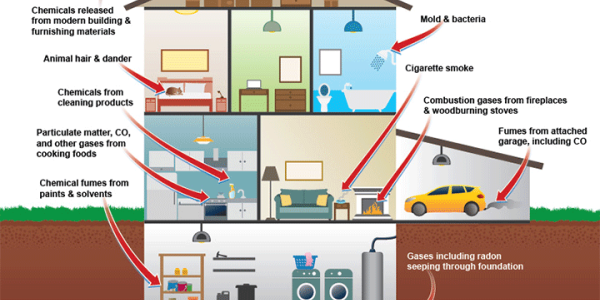 The U.S. Environmental Protection Agency has awarded the University of Colorado Boulder $1 million to evaluate the impacts of climate change, including increased wildfires, on indoor air quality and health in low-income Denver area neighborhoods. END_OF_DOCUMENT_TOKEN_TO_BE_REPLACED

University of Colorado Boulder student Andrew Nelson has been awarded a prestigious Goldwater Scholarship. The scholarship is worth up to $7,500 and recognizes sophomores and juniors who have achieved high academic merit and who are expected to be leaders in their fields. END_OF_DOCUMENT_TOKEN_TO_BE_REPLACED
Return to the top of the page