Methane leaks are a major factor in climate change. One startup wants to stop them

Methane leaks are a major factor in climate change. One startup wants to stop them

Sean Coburn walks down a dusty dirt road in Greeley, Colorado, flanked by a scene that’s becoming more common in this city at the edge of the Front Range—rows and rows of tanks, pipes, stacks and other hallmarks of the oil and gas industry.

The engineer, who earned his doctorate from CU Boulder and now splits time between the university and a company called LongPath Technologies, is wearing a flame retardant jacket, bulky boots and a hard hat. He needs them on this site. Here, operators take raw and very flammable oil and natural gas, the latter mostly composed of methane, and process it into a form that people can use to heat their homes or drive their cars.

But Coburn is heading for something else: a metal tower, about 50-feet-tall with what looks like a security camera on top.

“We pipe the laser light up from there,” said Coburn, pointing at a cabinet at the base of the tower. “Then we shoot it at different targets around the site.”

As he talks, the cabinet beeps, and the laser emitter at its end begins to turn, sweeping over the landscape.

The tower is part of an ambitious undertaking from scientists at LongPath and CU Boulder. They’re using new laser technology to do what other technologies have struggled to do for years: detect natural gas, which is invisible to the eye, leaking from pipes at sites like this, in real time.

Methane is a powerful greenhouse gas, said Greg Rieker, an associate professor of mechanical engineering at CU Boulder. He testified before the U.S. House of Representatives Committee on Science, Space and Technology June 8 about the problem of methane emissions. He noted that methane can trap nearly 80 times more heat in the atmosphere than carbon dioxide, and research suggests that escaped methane from oil and gas operations may play a much bigger role in climate change than previously thought.

LongPath is trying to plug that source. The company’s towers shoot lasers over miles of terrain to sniff out even the faintest whiffs of methane in the air. So far, the company has installed 23 of them covering almost 300,000 acres in Texas, New Mexico, Oklahoma and Colorado. Rieker believes the technology could be a win-win for the West: Slowing down emissions of this dangerous gas, while also reducing costs for an industry that employs tens of thousands.

The story of this technology, called a dual frequency comb laser spectrometer, dates back to the 1990s when a physicist at CU Boulder and JILA named Jan Hall first developed frequency comb lasers to explore the working of atoms—and earned a Nobel Prize in the process.

“Now, we’re able to use those same ideas and, with just one of these systems, mitigate about 80 million cubic feet of methane emissions per year,” said Rieker who co-founded LongPath in 2017. Scott Diddams was part of those early days of frequency comb lasers. He was a postdoctoral researcher working with Hall at JILA, a joint research institute between CU Boulder and the National Institute of Standards and Technology (NIST), to probe quantum physics—or the mysterious workings of very, very small things.

The researchers weren’t thinking about methane hovering over oil fields at the time. Instead, they used their lasers to measure how fast atoms tick. To make an atomic clock, Diddams explained, physicists first shine laser light at a cloud of atoms, giving them a kick so that they flip between different energy levels at a staccato pace. Hall’s group invented frequency combs to help count out that rhythm.

“Atoms tick nearly a quadrillion times per second,” said Diddams, now a professor in the Department of Electrical, Computer and Energy Engineering. “You need a really special tool to count those cycles.”

Frequency combs were special. Normal lasers, like the pointers in any lecture hall, can only generate one type of light: say, red light or green light. But these new lasers could produce thousands or even millions of colors of infrared light at the same time—an entire rainbow inside a single beam.

Hall and German scientist Theodor Hänsch took home a Nobel in 2005 “for their contributions to the development of laser-based precision spectroscopy, including the optical frequency comb technique."

By the time Rieker joined CU Boulder in 2013, he and Diddams were already wondering what else frequency combs could do. 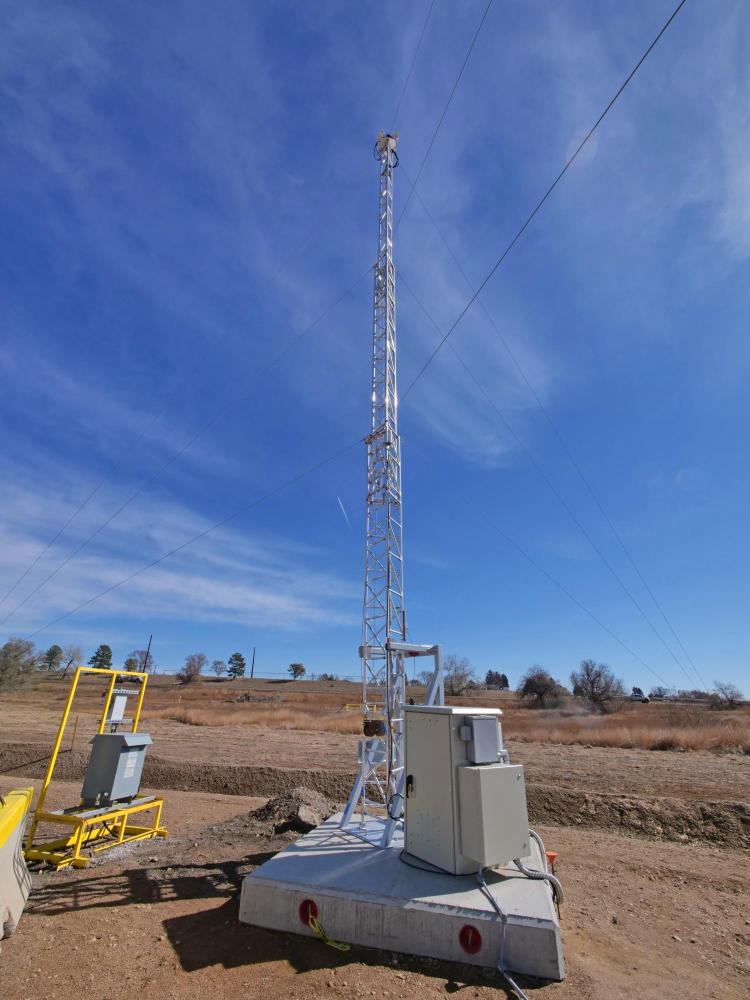 A laser emitter sits at the top of a tower at a natural gas facility in Colorado. (Credit: Casey Cass/CU Boulder)

At LongPath’s offices in Boulder, Coburn and his colleagues open a computer window showing the data coming in from the system in Greeley. The graph shows a squiggly readout with sharp spikes like the teeth in a comb.

Each tooth corresponds to a color in the team’s frequency comb laser (hence, the name). Rieker explained that if you shine one of these devices into a cloud of gas, the molecules inside will absorb some of those colors but not all of them. In other words, molecules will leave an imprint on the laser light, almost like pressing your thumb to a glass.

“Each of these different molecules absorbs a different pattern of light,” Rieker said. “Methane has one pattern. Water and carbon dioxide have another.”

Frequency comb technology can read those molecular fingerprints to tell you exactly what kinds of molecules are present in a patch of air.

Or that was the theory in the mid-2000s. Rieker and scientists from NIST took roughly a decade to make it reality. First the team had to shrink these lasers, which could fill entire rooms, down to the size of a suitcase—then design them to survive the extremes of Colorado winters.

“We tested what happened when our laser froze,” Rieker said. “We broke it every way we could think of breaking it.”

Traditionally, he said, oil and gas operators look for leaks by using special video cameras or by hiring airplanes to fly overhead. Frequency comb lasers, in contrast, can operate 24/7 without a single human involved.

For 11 months in 2017 and 2018, the team put its technology to the test with funding from the U.S. Department of Energy. Rieker and his colleagues deployed one of their lasers at a natural gas storage facility in California. The laser, then mounted to the roof of a trailer, was able to detect methane leaks over several miles of terrain and at an incredible precision of just a few parts per billion. Because the system ran all the time, they were able to detect 12 times more methane per month on average than traditional tools spotted.

“After that, it spread by word of mouth,” Rieker said. “Because these things work.”

From atoms to stars

Around the same time, Rieker co-founded LongPath Technologies with his then research scientists Coburn and Robbie Wright, and Caroline Alden, a research scientist at the Cooperative Institute for Research in Environmental Sciences (CIRES) at CU Boulder.

In the beginning, it was slow-going. To launch LongPath and secure initial funding, Rieker and his colleagues worked with Venture Partners, the university’s commercialization arm for campus researchers. The company’s first employees worked out of rented space in Rieker’s basement lab on campus.

“Instead of the startup-in-a-garage, we were the startup-in-a basement. Then when COVID hit we all were working out of our own basements,” said Wright, now vice president of engineering at LongPath. “But in the past year we finally got our first dedicated office, and we’ve scaled from having three deployments out with one customer to 23 deployments with 17 customers."

Oil and gas executives have come around to these lasers, in part because they can save companies money, Rieker added—even a routine leak, he said, could cost operators thousands of dollars if they don’t catch it right away.

He’s now trying to replicate the success of LongPath.

In 2021, Rieker signed on to lead a new effort on campus called the Quantum Engineering Initiative, which seeks to transform other, fundamental scientific discoveries into real tools that you can hold in your hand. Graduate students in the engineer’s lab aren’t done with frequency comb lasers, either. This year, researchers will install one over a patch of frozen soil near Fairbanks, Alaska. They’re hoping to measure how much methane gas leaks out from that soil as it warms because of climate change.

Graduate student David Yun, meanwhile, uses frequency comb lasers for a completely different purpose: To study how hypersonic jet engines suck up and burn oxygen as they roar to life. Diddams employs a similar set of tools to search for planets circling stars tens of light-years from Earth.

“We really want to push the limits of where we can take this technology,” Yun said. “We keep pushing to see what is the craziest thing we can do with frequency combs?”

For Rieker, it’s a testament to science coming full circle—from explorations of atomic jitters to a Nobel Prize and even technology that may soon improve the lives of everyday Coloradans.

“This is a technology that was developed for something completely different—for creating better atomic clocks and other tools for quantum research,” he said. “Now, we’re making an impact on climate change.”

Birds that can live at 14,000 feet and also breed at sea level might have evolved more quickly than previously thought. END_OF_DOCUMENT_TOKEN_TO_BE_REPLACED

Despite the Inflation Reduction Act, U.S. progress on climate change remains stuck in a climate conundrum, CU Boulder experts say, hampered by politics, complexity and the scope of the problem. END_OF_DOCUMENT_TOKEN_TO_BE_REPLACED
Return to the top of the page