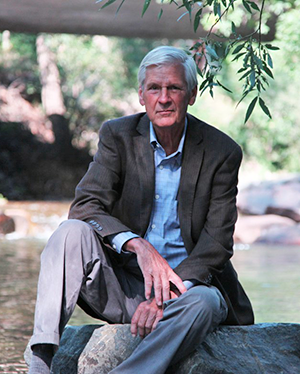 The nature of fertility and its consequences in aquatic ecosystems has long been the subject of intensive research, with two motivations:

Enrichment favors nuisance algal species that form scums, secrete toxins and cause deep waters of lakes to become anoxic dead zones. Much of the use and beauty of lakes is lost when lakes are fertilized by humans. Water quality protection in many nations, including the United States, emphasizes reduction of the vast human mobilization of both nitrogen (N) and phosphorus (P) that has enriched surface waters.

William M. Lewis Jr, professor of ecology and evolutionary biology at CU Boulder and director of the CIRES Center for Limnology, will present a lecture focusing on the projected outcome of withdrawal from enrichment: Can anthropogenically-enriched aquatic ecosystems be restored to a natural state?

William Lewis—Professor of Ecology and Evolutionary Biology, Cooperative Institute for Research in Environmental Sciences (CIRES) Associate Director and Director of the CIRES Center for Limnology—came to CU Boulder in 1974 following his doctoral work at Indiana University.

In 1988 he became a Fellow of CIRES where he founded the Center for Limnology, the study of inland waters (lakes, streams, wetlands). The Center supports research and education on aquatic ecosystems with emphasis on Colorado waters.

Lewis has had a strong interest in aquatic ecosystems of the tropics, which are attractive for research because they have been studied very little as compared with waters at higher latitudes. Lewis established field laboratories in the Philippines, the Mekong River in Laos, Lake Valencia in Venezuela, and the Orinoco River in Venezuela, with its associated lakes and wetlands. Lewis and his group have also continuously studied lakes, streams and rivers of Colorado.

Lewis was awarded a Guggenheim Fellowship for research in phytoplankton dynamics. He also received the Sustained Achievement Award of the Renewable Natural Resources Foundation for work at the interface of ecosystem science and environmental policy. From the International Society for Limnology, he received the Naumann-Thienemann Medal for studies of tropical waters and the Baldi Lectureship for global studies of biotic production in lakes. He is a Fellow of AAAS and served as President of the American Society of Limnology and Oceanography.