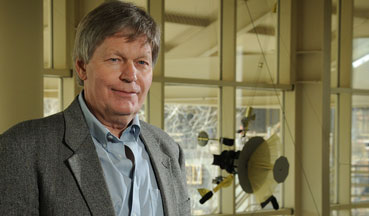 The 2010 Distinguished Research Lectureship was awarded to Dr. Daniel Baker, director of the Laboratory for Atmospheric and Space Physics (LASP) and professor for the departments of Astrophysical and Planetary Sciences and of Physics.

The lecture was entitled, "MESSENGER to Mercury: Exploring the Sun's Nearest Neighbor." It took place, Friday, April 16 at 3 p.m. in Math 100 on the CU-Boulder main campus and was free and open to the public. The audience nearly filled the auditorium.

“The Distinguished Research Lectureship singles out someone who has done extraordinary and exceptional work over the course of a career, not just one book or one project,” said John Stevenson, interim dean of the Graduate School.

Dr. Charles F. Kennel, Chair of The National Academy of Sciences Space Studies Board has said, “Dan Baker is one of America’s most distinguished space scientists.... Where over the years others slowed down, Dan did not, and in addition to his research, he rose to major leadership positions…He is now a senior statesman of space science. His work with the National Academy’s Space Studies Board, which I chair, is singular for its balance of passion and judgment. This quality, which he brings to all his research, now benefits the whole space plasma community.” 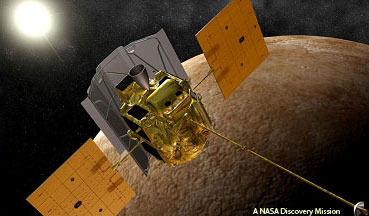 Dr. Daniel Baker's primary research interest is the study of plasma physical and energetic particle phenomena in planetary magnetospheres and in the Earth's vicinity. Dr. Baker currently is an investigator on several NASA space missions including the MESSENGER mission to Mercury, the Magnetospheric MultiScale (MMS) mission, the Radiation Belt Storm Probles (RBSP) mission, and the Canadian ORBITALS mission.

Dr. Baker presently serves on several national and international scientific committees including the chairmanship of the National Research Council committee on Solar and Space Physics and membership on the Space Studies Board. He is a Fellow of the American Geophyiscal Union, the International Academy of Aeronautics, and the American Association for the Advancement of Science (AAAS).

Most recently, he was awarded the American Institute of Aeronautics and Astronautics (AIAA) James A. Van Allen Space Environments Award and was elected to the U.S. National Academy of Engineering (NAE).

Dr. Daniel Moorer, President and CEO of the Wacari Group said, “In addition to his many duties as Director of LASP, he is a driving force ensuring that University of Colorado students have the opportunity to participate in some of the groundbreaking scientific and engineering work at LASP. I was one of those students.  I now…am contributing in my own way to the community. Perhaps that is the greatest contribution one can make to the community is to positively influence others in their own contributions.”