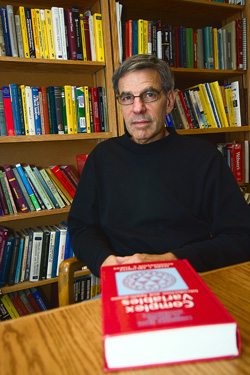 Applied Mathematics Professor Mark Ablowitz of the University of Colorado at Boulder was awarded the 101st Distinguished Research Lectureship, the highest honor bestowed upon a faculty member by the CU faculty, recognizing an entire body of creative work and research.

"The Distinguished Research Lectureship singles out someone who has done extraordinary and exceptional work over the course of a career, not just one book or one project," said John Stevenson, Associate Dean of the Graduate School.

Professor Ablowitz delivered the 101st annual lecture, titled "Beaches to Lasers: Mathematics and Extraordinary Waves," on Friday, April 3, 2009 at 3:30 p.m. in Old Main Chapel. The lecture, which was free and open to the public, was followed by a reception in the Heritage Center. Designed to be understandable by a lay audience, the lecture was intended to “leave all equations behind.”

The lecture discussed solitons, which are stable, localized waves first documented 175 years ago. The lecture traced the background of the phenomena and explained why mathematics played a crucial role in the developments. Applications range from water waves to giant internal ocean waves to long distance communications, lasers and Bose-Einstein condensation. The discussion was general and no equations were needed!

Ablowitz is considered a pioneer in the field of applied mathematics, and his work in the field is among the most highly cited in the world. He is best known for his landmark contributions to the "inverse scattering transform," a method used to solve nonlinear wave equations. Mathematicians and physicists have used IST to gain a better understanding of phenomena such as water waves.

Ablowitz was named a College Professor of Distinction by the College of Arts and Sciences in 2006 in recognition of his exceptional service, teaching and research or creative work. He joined the CU-Boulder faculty in 1989.

The lectureship was sponsored by the Council on Research and Creative Work, or CRCW, through the Office of the Vice Chancellor for Research and Dean of the Graduate School at CU-Boulder.