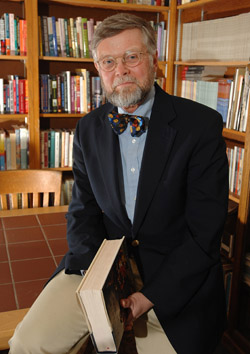 History Professor Fred Anderson of the University of Colorado at Boulder was awarded the 100th Distinguished Research Lectureship, the highest honor bestowed upon a faculty member by the CU faculty, recognizing an entire body of creative work and research.

"The Distinguished Research Lectureship singles out someone who has done extraordinary and exceptional work over the course of a career, not just one book or one project," said John Stevenson, associate dean of the Graduate School. "Fred has the reputation as being one of the great teachers on the Boulder campus; he has inspired many students over many years."

He delivered the 100th annual lecture, titled "War and Peace in American History," on Wednesday, February 20 at 4 p.m. in the Old Main Chapel. The lecture, sponsored by the Council on Research and Creative Work, or CRCW, through the CU-Boulder Graduate School and Office of the Vice Chancellor for Research, was free and open to the public.

Anderson’s research and teaching focus is on the colonial period, the era of the American Revolution and early national U.S. history. His publications include two critically acclaimed books "Crucible of War: The Seven Years' War and the Fate of the British in North America, 1754-1766" and "The Dominion of War: Empire and Liberty in North America, 1500-2000." His book "Crucible of War" was the inspiration for the Public Broadcasting Service documentary series called "The War That Made America." He also wrote the companion book for the series and served as an advisor to the PBS program.

Anderson's February 20 lecture explored how wars have shaped North America and the United States, and examined the ways that Americans understand the place of warfare in their history.

"Because Americans love peace and value freedom, we tend to imagine our wars mainly as occasions when we have been compelled to defend our liberty, or to liberate others," Anderson said. "But if we look beyond the three conflicts that everyone knows best -- the Revolution, the Civil War and World War II -- and seriously consider the impact of less-celebrated conflicts like the French and Indian War, the War of 1812, the Mexican-American War and the Spanish-American War, it becomes possible to understand war as a pervasive, immensely powerful influence in our history. I hope to argue that a more encompassing understanding of warfare as a shaping force can yield a different view of American history, its turning points and its meanings."

Anderson was awarded a John Simon Guggenheim Memorial Foundation Fellowship in 2001. Also in 2001, his book "Crucible of War" received two prestigious awards, the Francis Parkman Prize for "the best book on American history," and the Mark Lynton History Prize for the "best book-length work of history." In 1987-88, and again this year, Anderson was awarded a Faculty Fellowship from the CRCW. Anderson received his doctorate from Harvard in 1981 and joined the history faculty at CU-Boulder in 1983.

Professor Anderson donated his $1,500 honorarium to a fund for graduate students in the History Department.