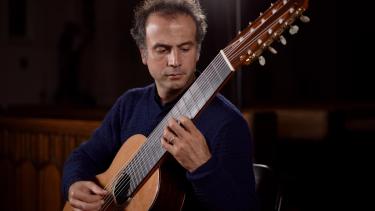 Associate Professor of Guitar Nicolò Spera joined the College of Music faculty in 2011. He also serves on the faculty of the study abroad program Chigiana Global Academy in Siena, Italy. Spera uniquely synthesizes European and American traditions in his teaching and performances.

Spera is one of the few guitarists in the world to perform on both six-string and ten-string guitars, as well as on theorbo. His wide-ranging repertoire includes the extraordinary music of the Franco-Andalusian composer Maurice Ohana; Spera has given lecture-recitals on the music of Ohana at many institutions and festivals worldwide, and his recordings of Ohana’s works for solo guitar have won awards including a “Chitarra d’oro” at the Convegno Internazionale di Chitarra in Milan, Italy. Spera has also published recordings of new works for guitar and choir; his own transcriptions of Bach’s Cello Suites; selected works by Catalan composers Federico Mompou and Enrique Granados; and a recording focused on the passacaglia form.

A primary goal of Spera’s creative work is to expand the guitar repertoire. He is committed to commissioning substantial works that explore unprecedented ways of writing for guitar.

Spera has commissioned, performed and recorded new works ranging from solos to programs with choirs, small ensembles and orchestras. He has collaborated with composers from Europe and the United States, including Nicola Campogrande, Steve Goss, Corrado Margutti, Francisco del Pino, Annika Socolofsky and Christopher Theofanidis. Spera’s passion for choral music and his interest in new works for guitar and choir have also led him to a close collaboration with choir conductor Eugene Rogers.

His most influential teachers are Oscar Ghiglia, Jonathan Leathwood and Lorenzo Micheli. Spera earned degrees from the Conservatory of Bolzano and the Accademia Musicale Chigiana in Siena, Italy; an Artist Diploma in guitar performance at the University of Denver; and a Doctor of Musical Arts from the University of Colorado Boulder.