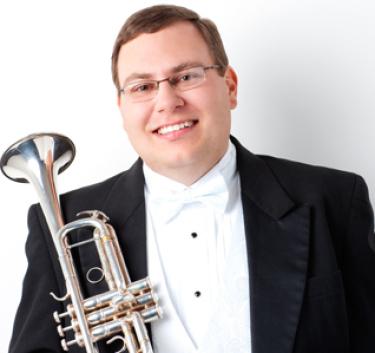 Justin Bartels has been on faculty at the University of Colorado Boulder since 2012 and is Principal Trumpet with the Colorado Symphony Orchestra, a position he has held since 2008. Over the past six years, his students have gone on to high-level graduate programs at several schools, including Indiana University, Temple University, The University of North Texas and Arizona State University. Student accomplishments include Military Bands appointments with the United States Marine Band, United States Navy, and Air Force Academy.  Bartels’ students hold positions with professional symphony orchestras and numerous positions in higher education.

In addition to his duties at the Colorado Symphony and the University of Colorado Boulder, Bartels has performed as Guest Principal Trumpet with New York City Ballet, St. Louis Symphony, and San Francisco Symphony. He has also performed with the Alabama Symphony, Dallas Symphony, Los Angeles Philharmonic, Milwaukee Symphony, New York Philharmonic, Houston Symphony, and Virginia Symphony. He previously held the position of Principal Trumpet with the Columbus Symphony in Ohio and the Central City Opera before his appointment in Colorado. He is on faculty as a Visiting Guest Artist of Orchestral Studies at the University of Denver and taught applied trumpet at Regis University from 2009-2012.

Bartels is a 2003 graduate of the Indiana University Jacobs School of Music where he studied primarily with Marie Speziale as well as John Rommel and Ed Cord. He also attended the University of Cincinnati College-Conservatory of Music studying with Alan Siebert and Marie Speziale.

Bartels lives with his wife in Denver along with their two daughters. Bartels is a Yamaha Performing Artist.