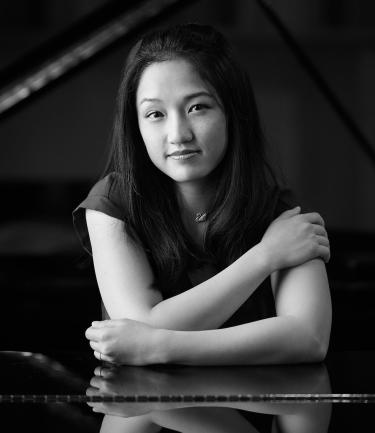 Pianist Hsiao-Ling Lin joined the keyboard department faculty at the University of Colorado Boulder in the fall of 2011.  Her active performing career has take her to Carnegie’s Weill Recital Hall, Isabella Stewart Garden Museum and Jordan Hall in Boston, the Chicago Symphony Hall and Chicago Cultural Center, Sendai Cultural Center in Japan, and the Rachmaninoff Hall in Russia.  Her summer festival appearances include the Meadowmount School for Strings in New York, Caramoor Festival and the International Festival-Institute at Round Top.

Since coming to the United States from Taiwan, Lin’s performances have been broadcasted live over the TV and radio stations, and she has collaborated in recitals with many artists, including her distinguished faculty colleagues at the University of Colorado Boulder, violinists Lynn Chang, Nai-Yuan Hu, and Yang Liu; cellists Lynn Harrell, and Matt Haimovitz; flutists Carol Wincenc, and Lorna McGhee; oboist Basil Reeve; clarinetists Kenneth Grant, Steve Cohen; as well as members of the Takács and Tokyo String Quartet; members of the Boston, Chicago, Cincinnati, Colorado, St. Louis  Symphony Orchestras and the Los Angeles Philharmonic. Most recently, she has completed a tour of recitals in Asia and Europe with trombonist Peter Steiner.

Lin has held staff pianist positions at Musicorda in Massachusetts, the International Festival-Institute at Round Top, Summer Music Festival at Walnut Hill, the Boston Conservatory, the Chicago College of Performing Arts at Roosevelt University, Northwestern University, and the Meadowmount School for Strings in New York. Equally interested in promoting music of diversity and multiculturalism, Lin was appointed as the resident pianist for the Core Ensemble during 2009-2012: a chamber music-theater company that tours and gives workshops around the colleges and universities throughout the United States.

Lin earned her Doctor of Musical Art Degree in Piano Performance and Collaborative Arts from Northwestern University under the guidance of James Giles and Elizabeth Buccheri; additionally, she holds Degrees from the New England Conservatory and DePaul University where she studied with Victor Rosenbaum, Irma Vallecillo and Eteri Andjaparidze. She has also participated in summer festivals such as Music Academy of the West, Musicorda, and Banff Centre for the Arts where she worked with Anne Epperson, Jonathan Feldman, Lydia Artymiw, and Bernadene Blaha.