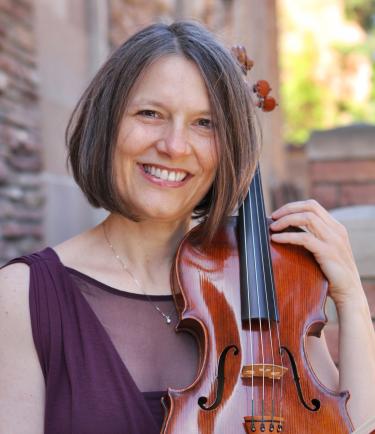 Violist Erika Eckert is currently Associate Professor of Viola at the University of Colorado at Boulder.  She has also been a faculty member of the Brevard Music Center since 2011.  Previously, Eckert served on the faculties of The Cleveland Institute of Music, Baldwin Wallace College, and the Chautauqua Institution in New York where she served as the coordinator of the chamber music program for the Music School Festival Orchestra for three summers.

As co-founder and former violist of the Cavani String Quartet, Eckert performed on major concert series worldwide, garnered an impressive list of awards and prizes, including first prizes at both the Walter W. Naumburg Chamber Music Competition and the Cleveland Quartet Competition, and appeared on NBC, CBS, ABC, PBS, and National Public Radio.

In recent seasons, Eckert has performed as guest-violist with the Takacs String Quartet, appearing with them in Canada, California, Colorado, North Carolina, Oregon, Tennessee, Texas, and Vermont. She has also performed on numerous faculty recitals at the University of Colorado as well as soloing with the Music in the Mountains Purgatory Festival Orchestra, Four Seasons Chamber Orchestra, the University of Colorado Symphony Orchestra, the Boulder Bach Festival, and the Boulder Chamber Orchestra.

Erika Eckert serves on the board of the Rocky Mountain Viola Society and for three years served as an adjudicator for the National Foundation for Advancement in the Arts (NFAA) Arts Recognition and Talent Search, the exclusive nominating agency for the Presidential Scholars in the Arts, and appeared in their Academy Nominated Documentary, Rehearsing a Dream.