It all started with a piano

Music was first mentioned in the records of the University of Colorado when a piano was purchased for Old Main chapel in 1882. After a few failed attempts to establish a musical department, a place for music was more firmly fixed in Boulder by Charles Farnsworth, an enterprising and popular teacher from 1888 to 1899.

Music was accorded more attention and status—as a “college”—under the direction of virtuoso organist Frank W. Chace, who worked to establish a bachelor of music degree in 1920 and secured funding for a great pipe organ installed in Macky Auditorium soon after. During Chace’s brief but productive tenure (1920 to 1926), the number of music majors and other student participants in musical groups increased to such an extent that the university saw fit to refurbish the old medical building on campus for the exclusive use of the College. 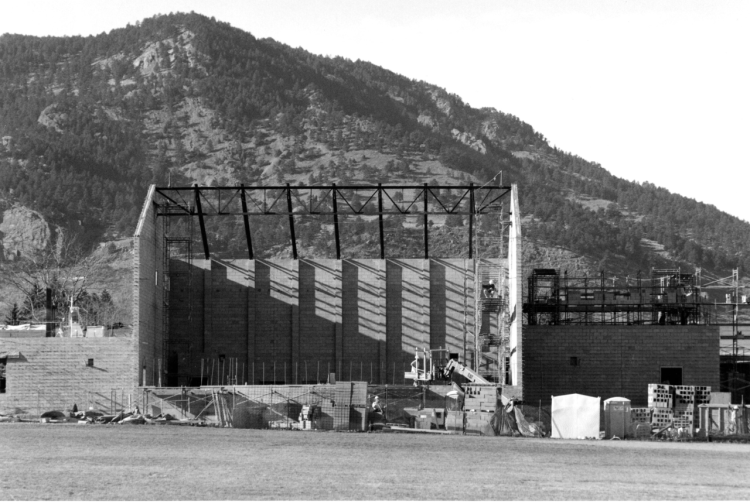 Rowland Dunham succeeded Chace in 1927 and served as director and later dean until 1951. Dunham held the single professorship in the college but gradually added instructors to teach band, orchestra, voice, organ, composition, other single instruments and practical courses to prepare public school teachers. A majority of music majors at CU during these years graduated in the bachelor of music education program, and a master’s degree in the field was added in the 1930s. With the aid of local advisors and generous independent donors, Dunham was also able to entice a variety of visiting artists of national and international stature to visit the campus, helping to make CU an attractive stop for touring performers.

Warner Imig, the longest serving dean of the college to date (1951 to 1978), building on the foundation laid by Chace and Dunham, introduced doctoral degrees and added new student ensembles. He significantly bolstered the graduate programs with more faculty and students, formed a select choir, and encouraged string and wind chamber groups, as well as ensembles devoted to percussion music, early (pre-1750) repertories and newly-composed works. Imig was also the first dean to oversee the college in its new building, which opened in 1955 and—with several additions, including the Fink rehearsal hall, left (photo courtesy Eric Neurath, CU Boulder)—still stands and bears his name.

To learn more about the developments in and growth of the College of Music up to the present, during the deanships of Robert Fink, Daniel Sher and Robert Shay, check out the History page or scroll through the photos below.

Snapshot: The College of Music 1882-present 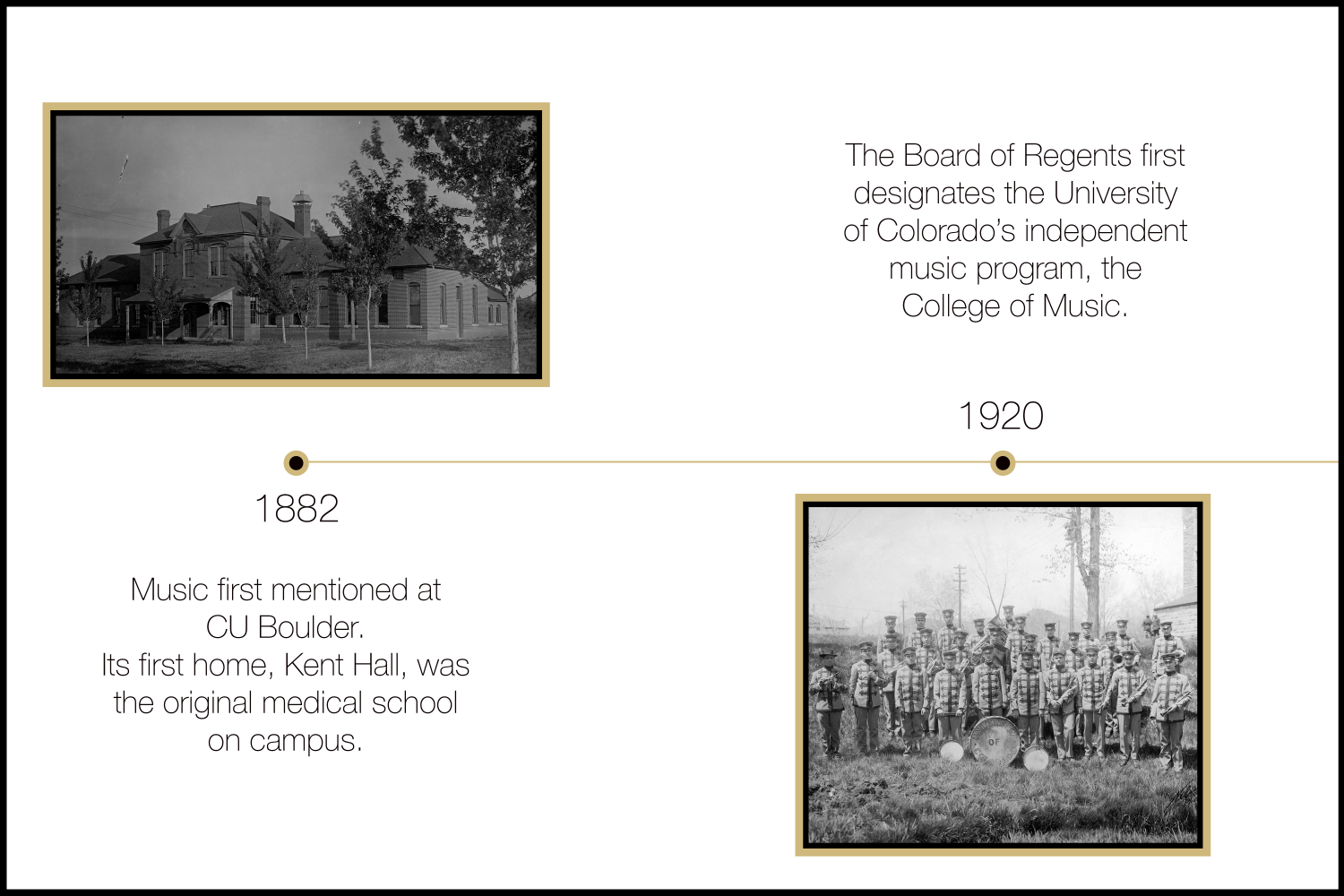 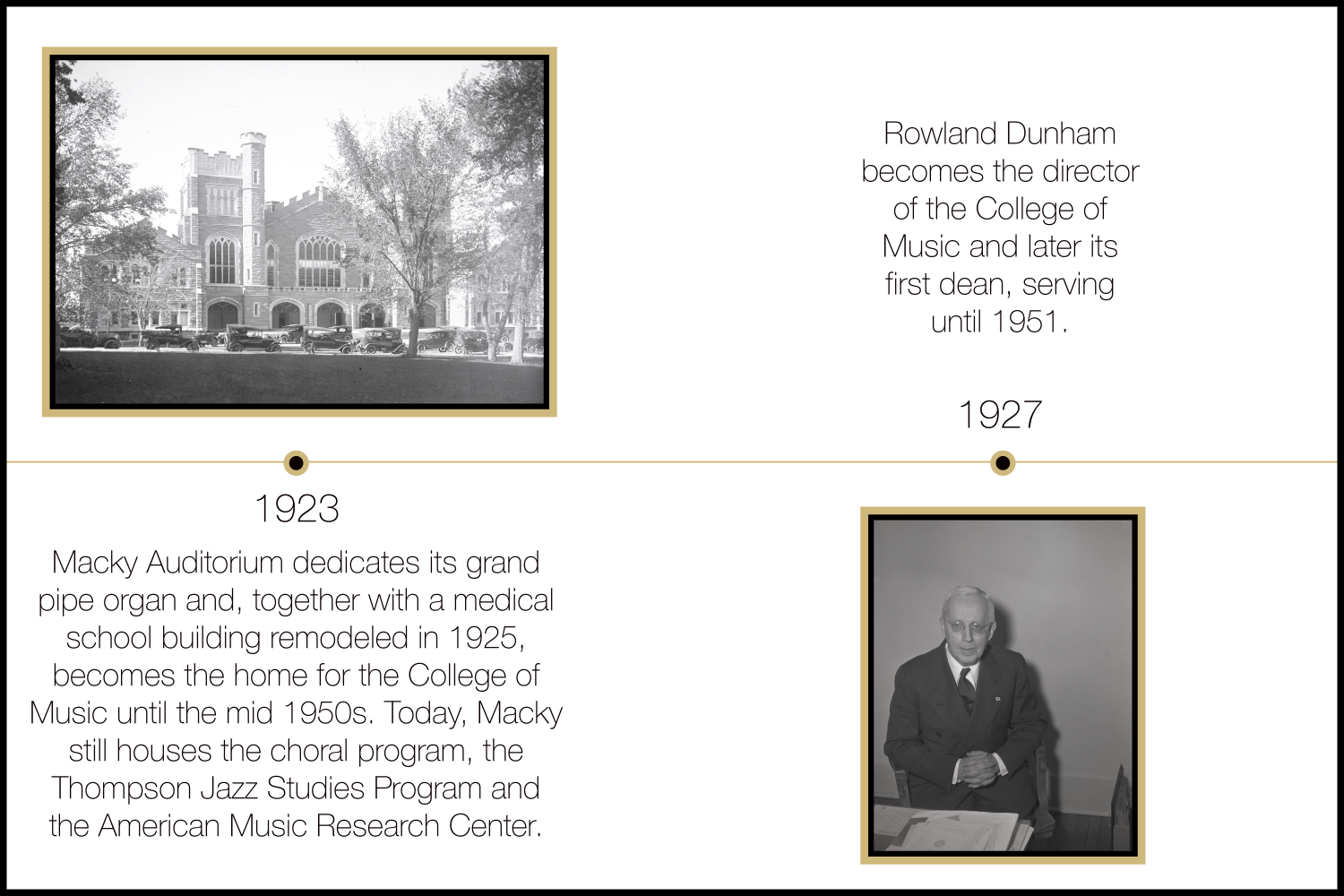 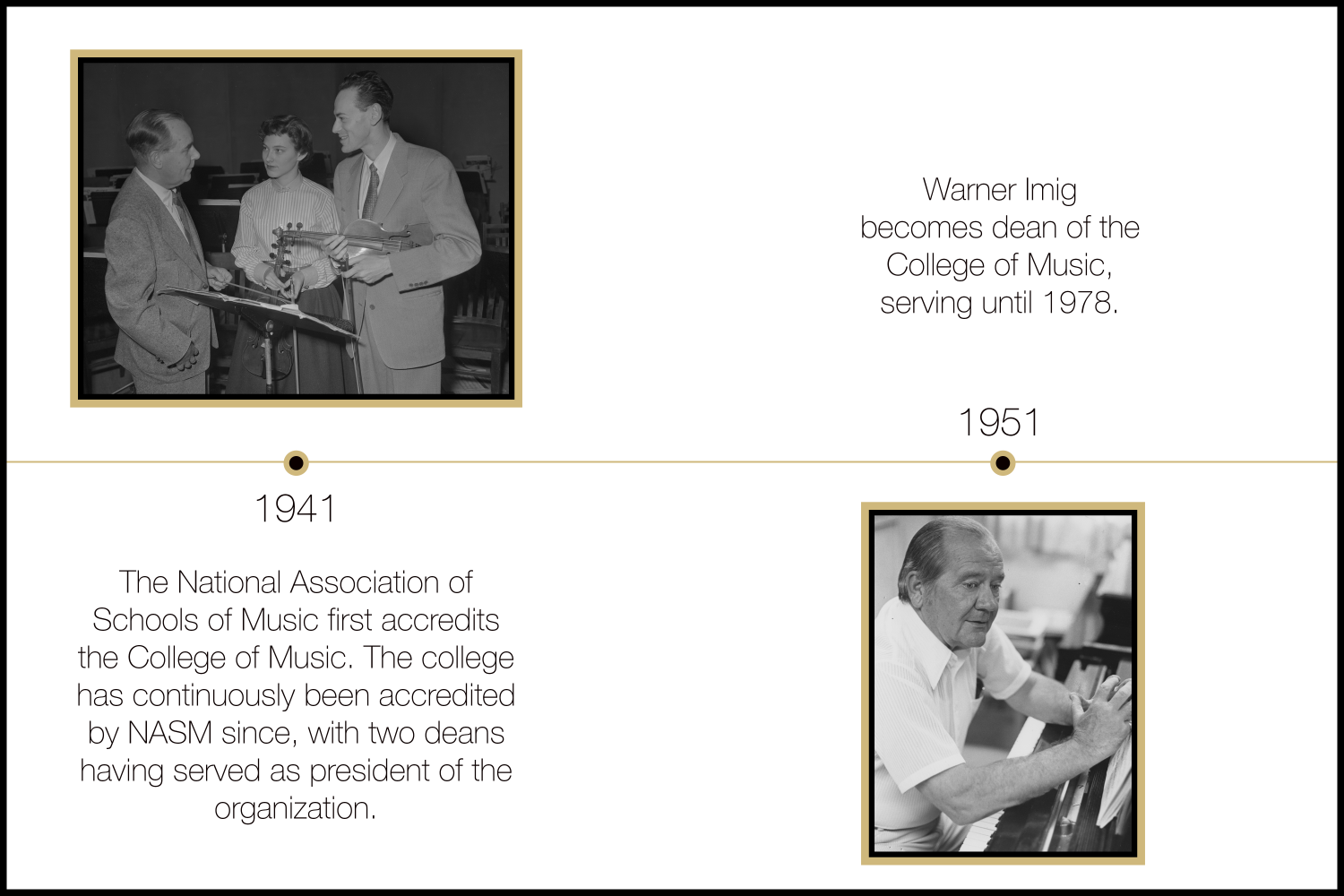 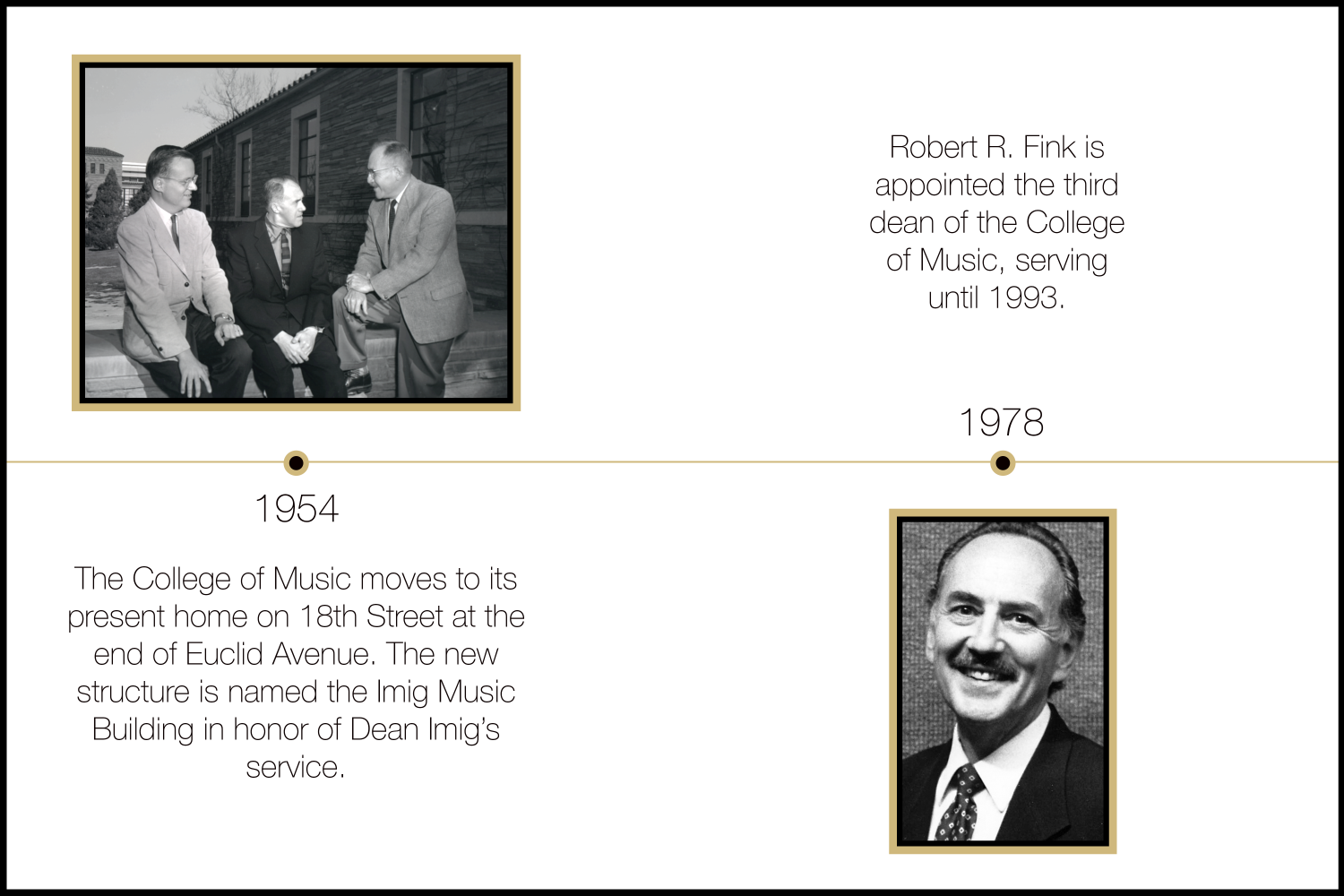 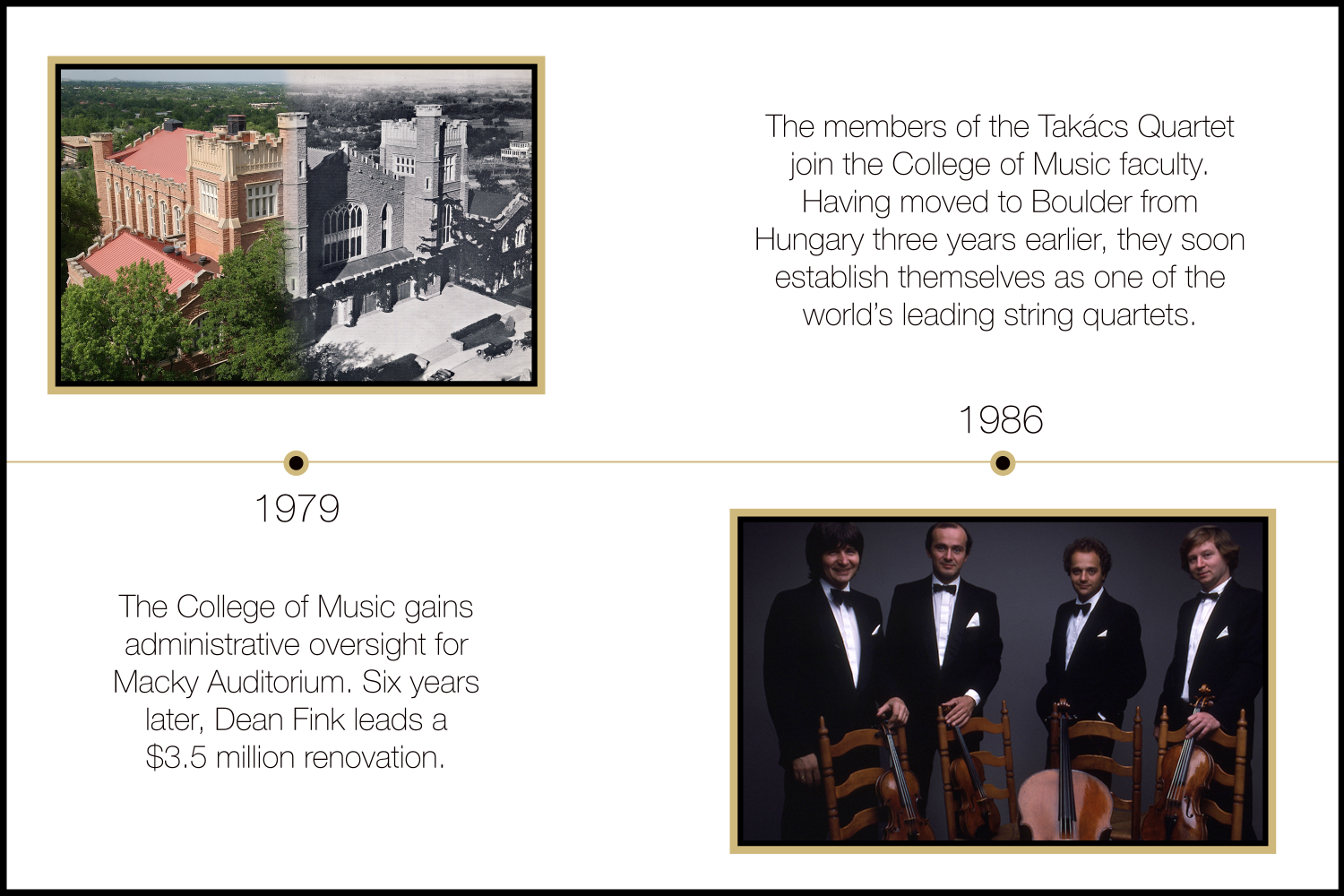 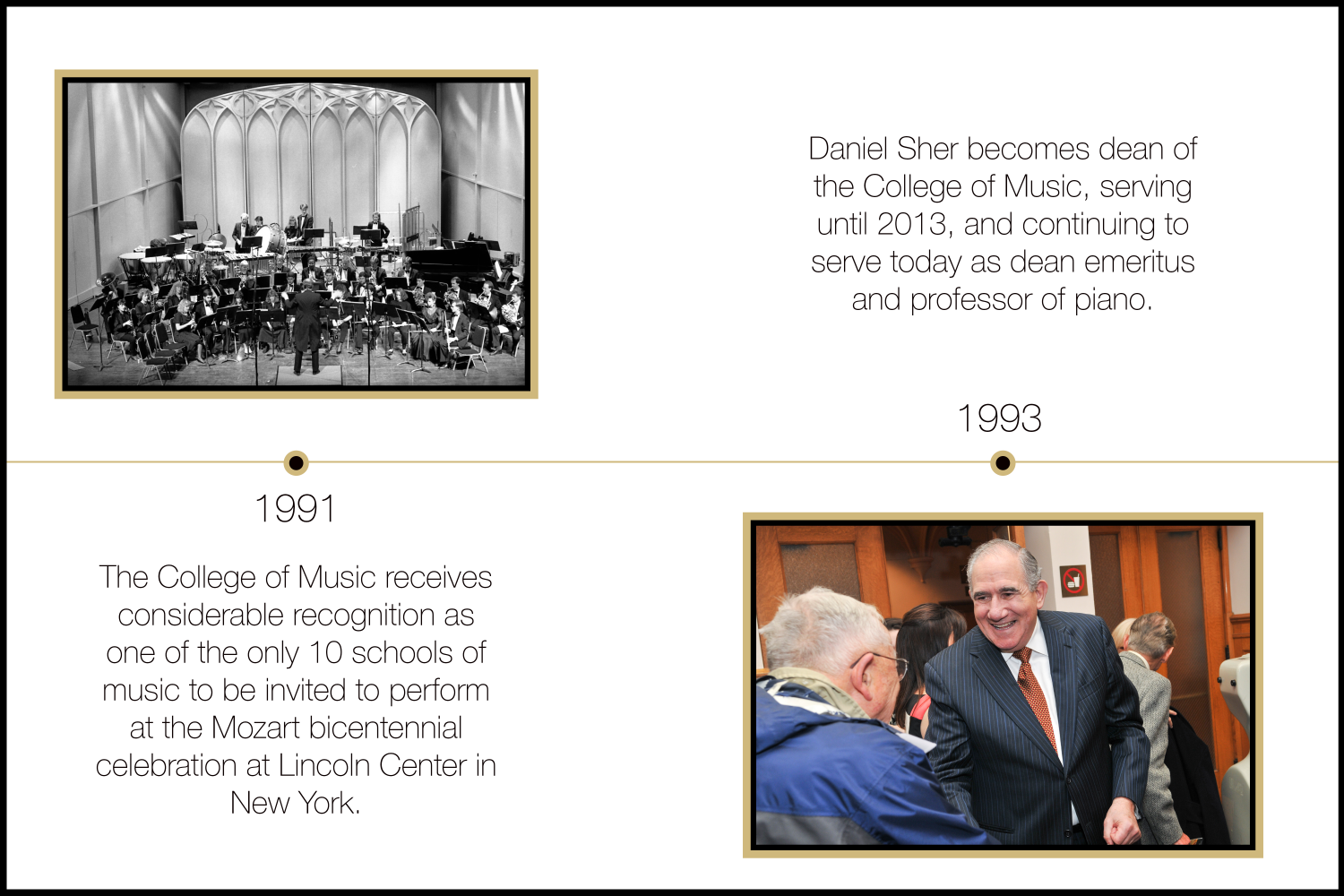 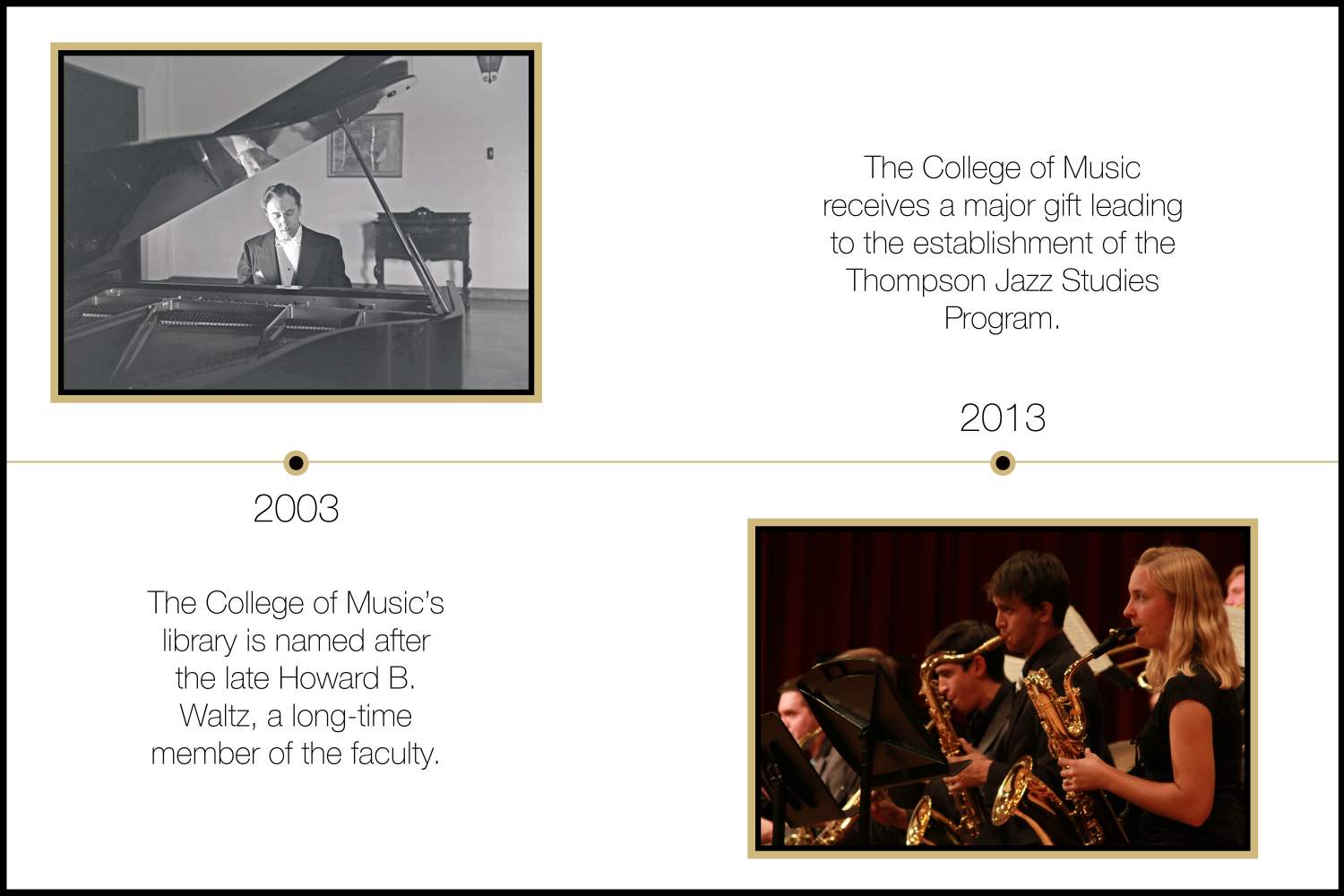 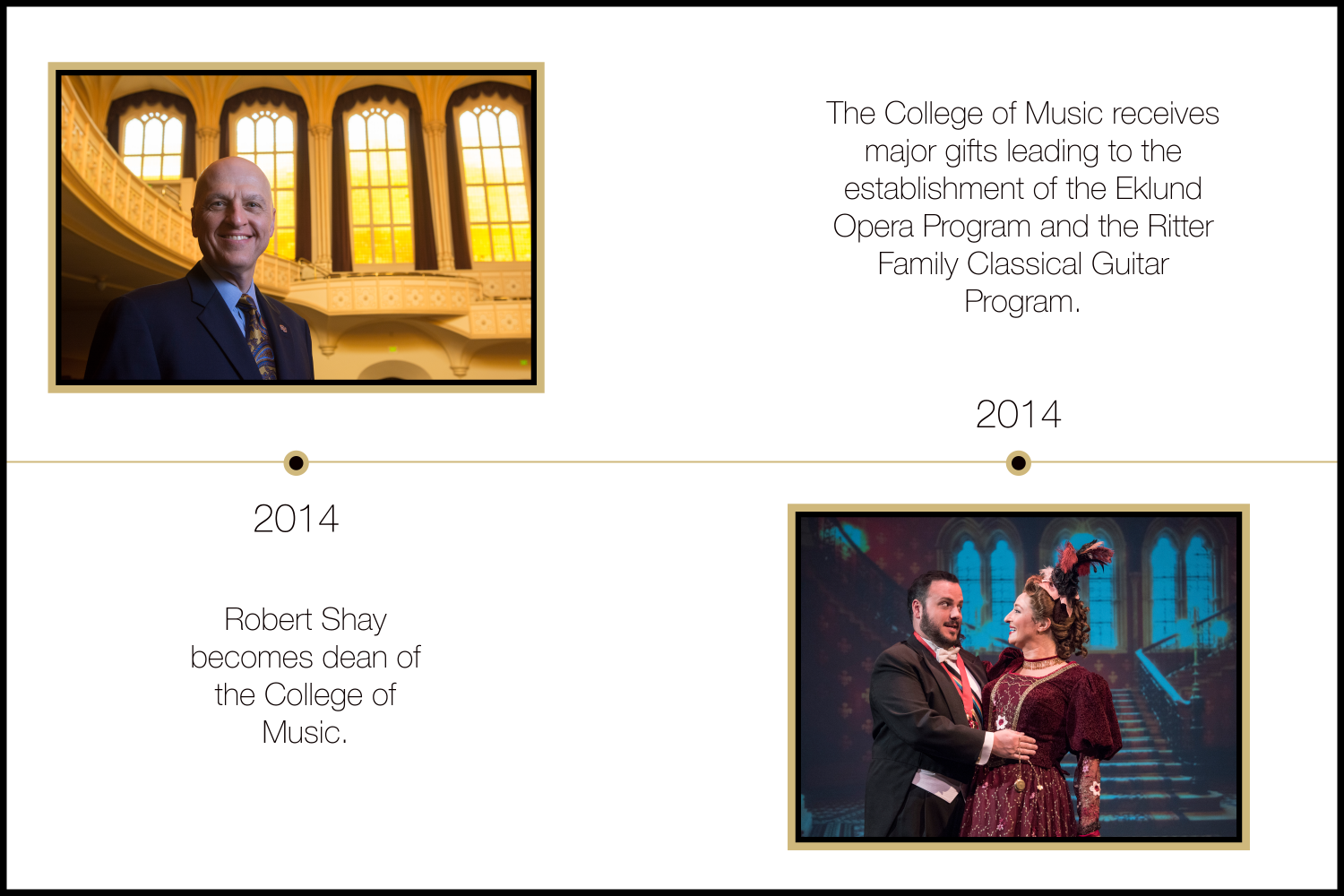 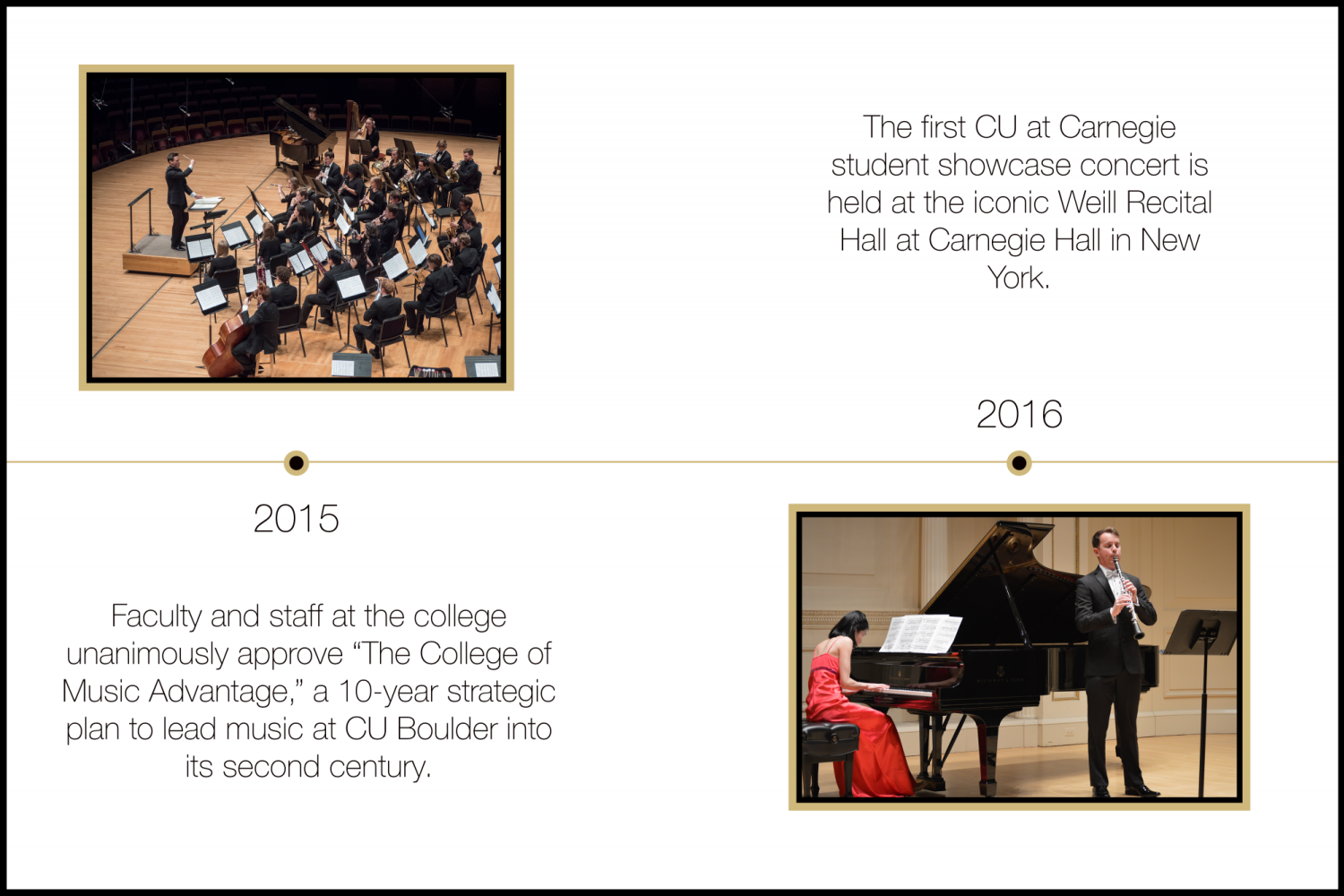 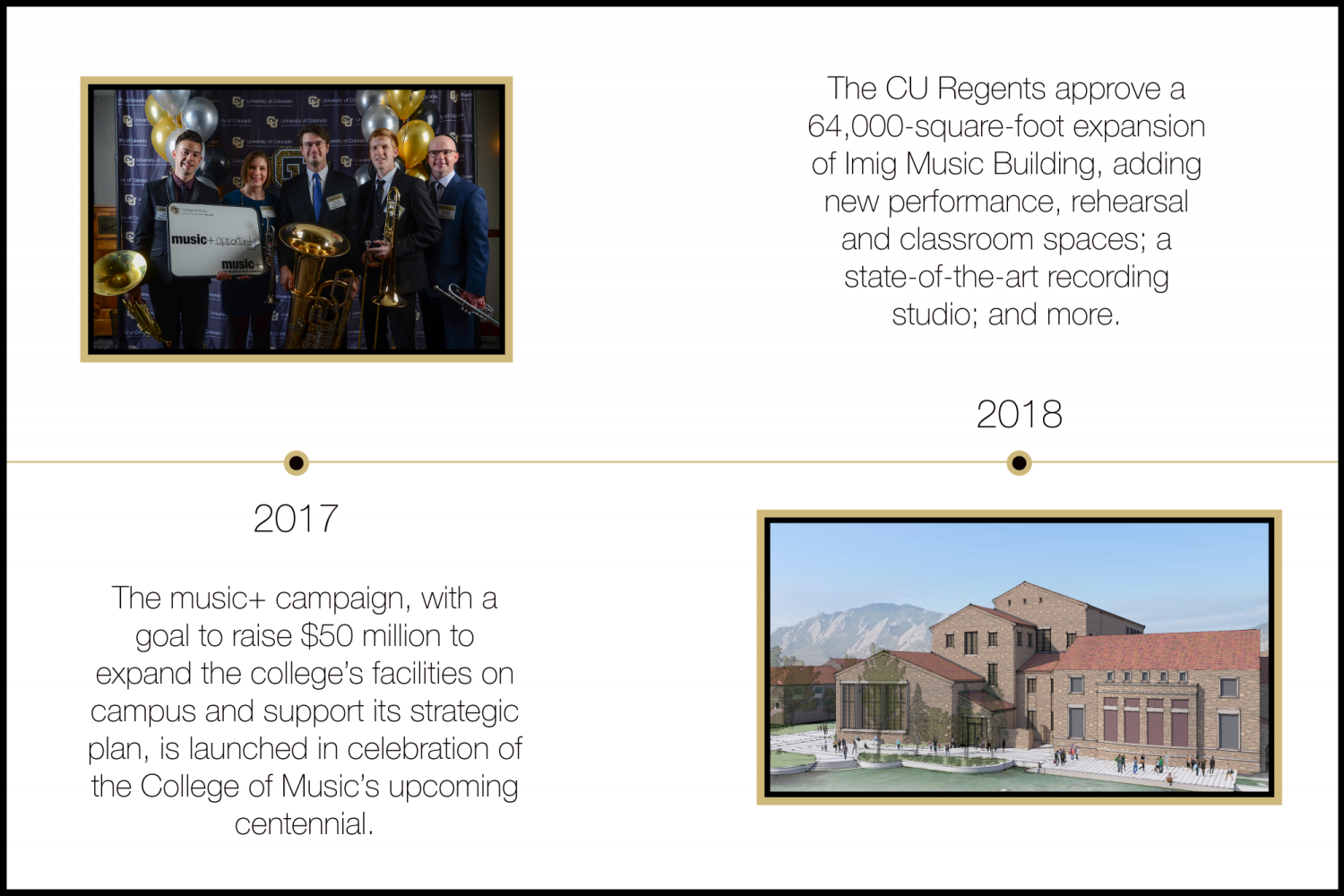