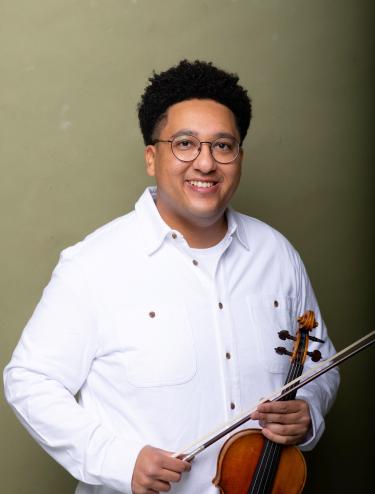 Described by the Viborg Folkeblad (Denmark) as a “true virtuoso … [who] left the audience almost breathless,” Assistant Professor of Violin Alex Gonzalez enjoys a versatile career as a chamber musician, ensemble leader and educator.

Previously, Gonzalez taught on the faculties of Carnegie Hall’s National Youth Orchestra Program, the Sphinx Performance Academy at both the Juilliard School and the Cleveland Institute of Music, and as guest faculty for the Iberacademy in Medellín, Colombia. He has also enjoyed presenting solo and chamber music master classes at the North Carolina School of the Arts, Montclair State University and Skidmore College, among others.

An avid chamber musician, Gonzalez was a recipient of the John Celentano Award for Excellence in Chamber Music upon graduation from the Eastman School of Music. He has enjoyed performances at notable venues domestically and abroad, including Carnegie Hall, the National Gallery of Art, Queen Elizabeth Hall, Mount Moiwa Forest Gallery, Kirsten Kjærs Museum, Lund University and Oxford University. Additionally, his performances have been broadcast on BBC Radio 3, WQXR and the SkyArts Television Network. Gonzalez has also made appearances at numerous festivals, including the Chatsworth Arts Festival, Sitka Music Festival and Thy Chamber Music Festival, as well as the Thy Festival’s Autumn Tour.

Gonzalez is a member of The Knights, having performed with the ensemble in a variety of roles—soloist, chamber musician, principal, and for recordings and international tours. He is also a longtime member of the Sphinx Virtuosi, touring extensively with the ensemble and regularly serving as rotating principal and concertmaster. Gonzalez has further performed with such ensembles as the Saint Paul Chamber Orchestra, Minnesota Orchestra and Cabrillo Festival Orchestra, among others.

Gonzalez enjoys regular collaborations with the Chineke! Foundation, appearing across the United Kingdom and Europe as both guest concertmaster and chamber musician with various Chineke! ensembles. And—as a former member of the New World Symphony—Gonzalez regularly served as concertmaster to Michael Tilson Thomas and other distinguished guests; he was honored to perform in a celebration of MTT at the 2019 Kennedy Center Honors.

Outside of chamber music, Gonzalez’s recent solo engagements include performances at the Caramoor Center for Music and the Arts, the National Arts Club and with the Orlando Philharmonic Orchestra.

Gonzalez performs on a commissioned violin made for him by Mario Miralles in 2017, thanks in part to a Sphinx MPower Artist Grant.